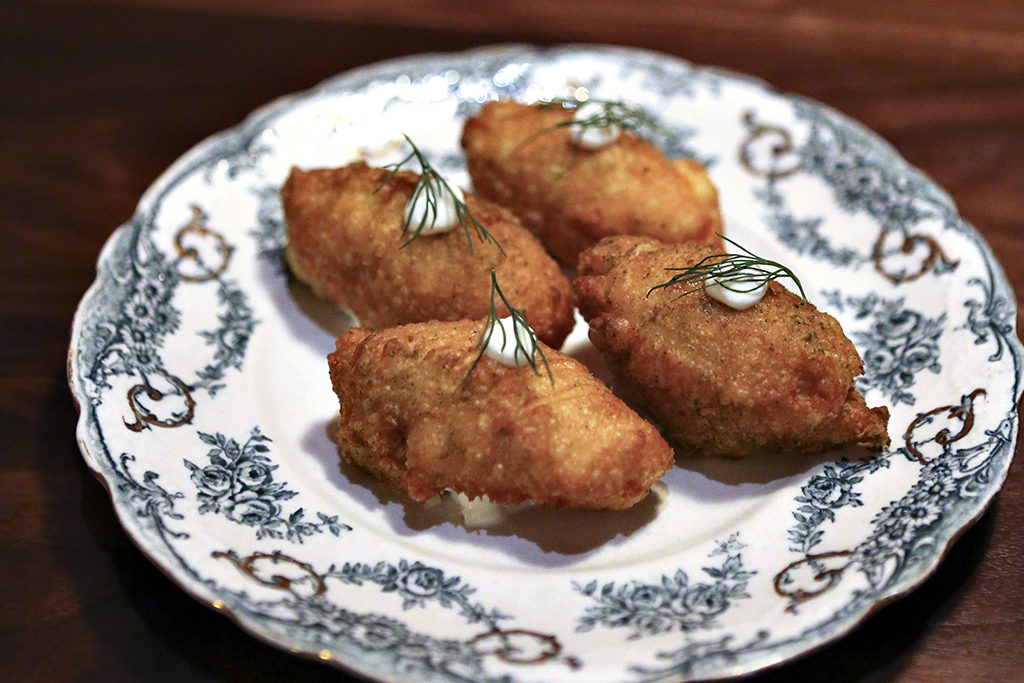 SCENE: An intimate French bistro with a smattering of tables and a soundtrack reminiscent of a hip Montreal house party.
RECOMMENDED DISHES: The menu changes regularly; try croque cubano and the marinated mackerel.
DRINKS: A mostly verbal wine list, with constantly changing wines by the glass, and classic cocktails.
PRICE: Around $140 for two
OPEN: Tuesdays to Saturdays from 6 to 11 p.m.
RESERVATIONS: By phone at 416-323-1385, or through the Resy.com reservations platform.

Sibling rivalry, be it between brothers or cities, is nothing new. And Toronto has long been jealous of Montreal’s effortless cool. Torontonians put anything Montreal on a pedestal, and so when a restaurant with Joe Beef blessings moves into town — owner-chef Zach Kolomeir worked his way up from busboy to chef de cuisine in Joe Beef’s prestigious kitchen — you better believe that a Who’s Who of the foodie world is going to be champing at the bit to get a seat. And at Dreyfus there are only 30.

The snug Harbord Street room has a smattering of tables, with a half-dozen bar seats tucked into the back of what was once a Victorian row house’s foyer. Even on a Wednesday evening, with Anderson .Paak providing the soundtrack, the place feels like a chic Plateau house party with the decibels reaching near raucous levels.

The menu is an ever-changing, hand-scrawled list of a dozen or so sharing plates. There are some by-the-book French items, such as jambon remoulade, but many of the plates would confuse Julia Child. The croque cubano, a cubano-croque monsieur hybrid, is the sandwich we never knew we needed. A hunk of confited pork shoulder dwarfs slices of rye, with béchamel sauce and a sliver of pickle translating into mouthfuls of fatty, acidic perfection.

Another improvement on a classic is the squid Provençal, which takes the traditional stewed cephalopod to a new level. Instead of using a simple tomato sauce, Dreyfus does its in sepia ink. The all-black dish, topped with a few spoonfuls of ratatouille, is tender, and the umami-packed sauce so good it demands bread to sop it up. A watchful server sees us eyeing our Rorschach test–looking plates. The proffered bread is appreciated, but it takes too long to arrive. Although everyone on staff is gregarious, there are a few timing issues with how plates are paced — problems that will hopefully work themselves out over time.

With a name alluding to the Dreyfus Affair, we expect a few nods to Montreal’s rich Jewish heritage, and we’re not disappointed.

A plate of marinated mackerel served with two types of Québécois pickled cucumbers, for instance, is fancy Montreal Jewish deli food done right. The pucker from the fish is carried by the diced pickles strewn throughout the plate, and the fresh dill punctuates perfectly. The only complaint: we wish there were a few more bites. As the server swoops in to remove the plate, we assure him: that last morsel will be eaten.

Dreyfus isn’t overcomplicating the food it puts out; each plate focuses on no more than a handful of elements. Case in point is today’s pasta dish: Fresh pappardelle from Baldassarre’s tossed with butter-fried chicken livers that have been deglazed with Marsala. It’s a simple plate — something a grandmother might make, but with much better ingredients. In this case, a slightly thicker sauce would allow the noodles to clutch more of the goodness.

With an ounce of room left, we tack on an additional plate: the halibut. Unfortunately, 27 minutes and $34 later it disappoints. The olive oil–poached fish is overcooked and feels mismatched with the other ingredients: The bacon overshadows, and two awkward endive leaves add nothing to the mix. The delicate broth and fresh peas, though, are still young summer in a bite, but on their own they can’t redeem this disjointed dish.

We still crave a sweet finish. All night, we’ve watched pools of citrus wedges smothered in sabayon grace our nearby tables. By the time it’s time to order one, they’ve run out.

We savour our final sips of Dinavolino, a funky orange vino that’s a tart, yet slightly sweet lip smacker. A very good note to end on.