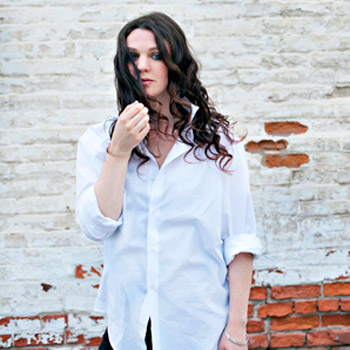 Amelia Curran is destined to become the next great breakout artist from the East Coast. Her latest CD, and first label effort, Hunter Hunter, is her finest to date and should be enough to propel her career to the national level.

Born and raised in St. John’s, Nfld., Curran picked up the guitar and started writing songs when she was 1, and took to busking on Water Street at 18.

“Music is tricky. It wasn’t like a lightning bolt struck or anything,” says Curran, of her decision to pursue music. “I was busking on the street in St. John’s when I was young, and it was just a natural flow — open mics, then hosting open mics, then I moved to Nova Scotia in 1999.”

While in Nova Scotia, Curran recorded four albums she released independently, the latest of which, War Brides, was re-released on Six Shooter Records last year. She has been nominated for a number of East Coast Music Awards and has garnered quite a following in the local scene. But her talent is far beyond that of a regional artist.

Curran gravitated to the legendary lyrics of crooner Leonard Cohen during her formative years. “That man can really paint a picture. I admire that in all his writing,” says Curran. “He’s inspiring, his writing is just second to none.”

Though not easily comparable, Curran’s emotional lyrics and ability to evoke strong images demands attention. Throw in the throaty growl and barroom philosophy of Tom Waits and the folk stylings of artists such as Kathleen Edwards, and one begins to get a clear idea of Curran’s talent.

“I don’t mind saying I’m a pretty sensitive and emotional person,” says Curran, of her moving lyrics. “I could write a sad song about spilt milk if I had to.”

But Curran adds a generous serving of booze and blues and darkness to balance the musical equation. “It is very pointed and a little bit dark,” says Curran of the new album. “You have to search for the light. It is there, the positivity is there, but I’m not going to make it easy. You have to trudge through it for a while.”

She says she tends to write in themes rather than day-to-day subject matter. With Hunter, Hunter, Curran writes of self, memory, forgiveness and desire.

“There is a reason matters of the heart have been the subject for artists for centuries,” says Curran. “It is uncontrollable and owns us. Even to give up on love is to break one’s own heart, which in itself is a precious part of love.”

Although Curran’s fifth album (The first and second are no longer available, so don’t look), this is her first release on a “bona fide” record label: Toronto’s Six Shooter Records. Martin Tielli, her label mate and former member of seminal rock band the Rheostatics, designed the artwork for the cover.

“It is intimidating at first to make,” says Curran of her first foray into making music with a record label behind her. “I’ve never had to report to anyone, but everyone has been so great.”