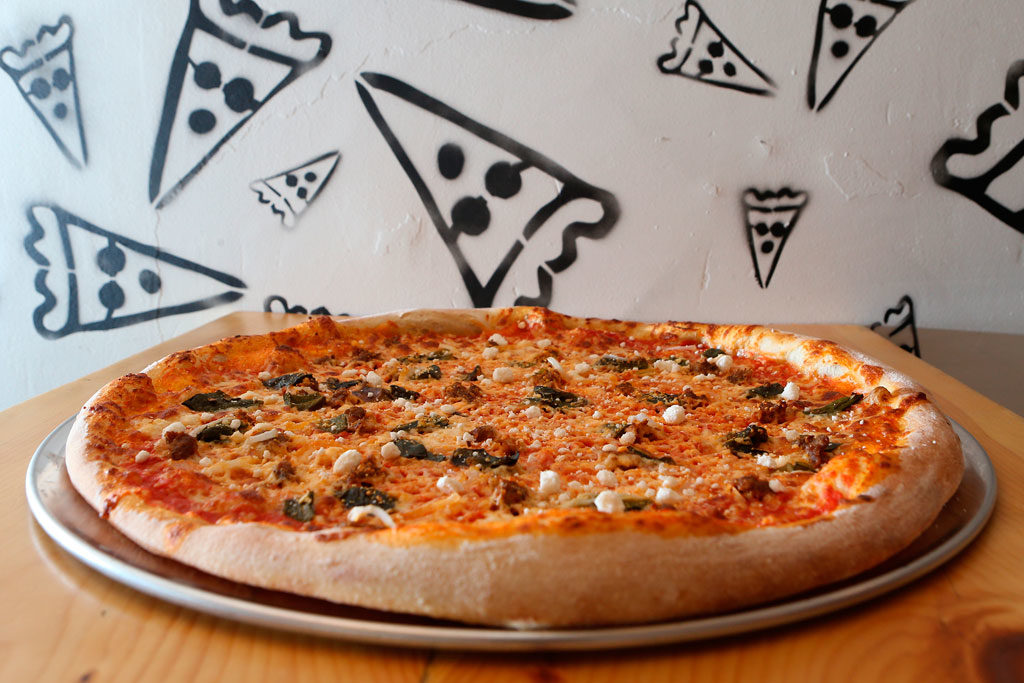 There’s nothing quite like sitting fireside in Nova Scotia, sipping beers while watching the ocean, and realizing you’re going to open a pizza joint. Chris Ioannou along with John Baker, Joe Papik and Alex Castellani, all of Boxcar Social, had gone out east for a summer getaway. While in Halifax, they checked out a pie-slinging spot by the name of YeahYeahs Pizza, and it was love at first, well, bite.

“The opportunity seemed like a bit of a golden egg,” says Ioannou.

And so they went for it.

Fortunately the team already had a property in mind: their own Clocktower Bar. Although there was nothing wrong with the Summerhill watering hole, the allure of pizza was too strong.

“Pizza’s a lot of fun!,” says Ioannou. “It’s a lot more fun than cocktails, than coffee.…”

And with all of the business decisions ready-made, getting things off the ground was far more doable than starting from scratch.

NOT SO SIMPLE CRUST

The same applied to the pizza itself. The Toronto menu is identical to the Halifax one, with the exception of the daily specials.

“Initially, the dough recipe was done by a guy in Dartmouth who is from Positano, and was a professional baker,” says Ioannou.

After months of R & D work, the team landed on the perfect recipe, resulting in a crust that inhabits the landscape between a Positano, Italy  style and a New York City style. Although pizza dough seems like a relatively simple thing in terms of ingredients, Ioannou notes that when it comes to the process, the humidity, the temperature and more all factor into the end result.

“If the dough sucks, that’s it — you’re done!” says Ioannou.

Just like in Dartmouth, the pizzas are cooked in electric ovens for a full seven minutes. What emerges is a pizza that has both some sturdiness while possessing flexibility. You can pick it up and happily fold it, and it won’t flop over.

From the condensed menu, customer faves include the pepperoni: “It takes forever to top,” Ioannou says. “It’s like laying coins down for a penny counter top.”

The result is a pie with excellent pepperoni-to-crust ratio.

Meanwhile, expat Haligonians will fall for the garlic fingers, which come with a side of donair sauce, a heady blend of garlic, condensed milk and vinegar.

Grab a slice and a lager (they make their own called Versus), and you’ve got yourself a proper meal.