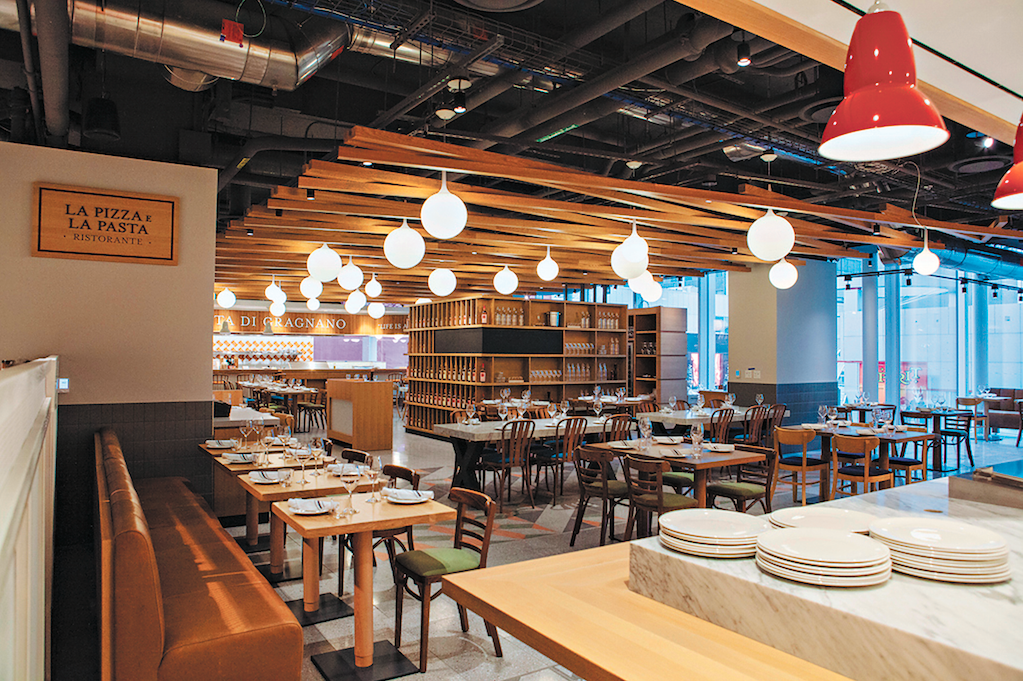 I am somewhat embarrassed to confess that while visiting New York last week, on the first day of said visit, I went to Eataly not once but twice. First for lunch at the fish place, and then, a few hours later it was necessary to load sugar, chocolate and caffeine in preparation for a long night at the opera, so we went back to Eataly for cannoli filled on the spot with sheep milk ricotta, studded with chocolate bits, and an espresso.

Embarrassed because it’s so predictable. A tourist in New York has neither the local knowledge nor the courage to seek out an independent for lunch or coffee, goes with the Starbucks equivalent of lunch.

I recognize that Eataly is a worldwide chain with 35 humongous outlets. I get that it’s a supercool mall for Italophile eaters.

But my PC contempt is over-ridden by treats like cannoli. And boy what a foodie fun palace it is — a food court for people with taste. Where else can you get a cannolo filled when you order it, for six bucks?

At the new Toronto Eataly, they don’t have their chocolate mojo down yet, so my cannolo was plain. But I loved it nonetheless: Creamy, with a gentle bite from the sheep milk, the shell impeccable crispy crunchy.

Eataly Toronto is 50,000 square feet on three floors of the Manulife Centre, with about half a dozen restaurants, depending on how you count them, a brewery, several bars, a gelateria, a coffee bar, and, of course, all the Italian groceries anyone could ever dream of.

But don’t look too close: The butcher, the baker, the fishmonger, the cured meat counter, the huge wheels of Parmigiano Reggiano and prosciuttos on display, the preserved tuna from Italy and every other jarred and canned treat one can imagine, fresh produce, great round loaves of bread and big bags of Italian flour at the bakery. It’s all so authentic and so beautiful. Think about those bags of flour with Italian writing on them, so artfully stacked outside the bakery. And the hanging prosciuttos and great wheels of Parmigiano. I love the look of the carefully curated experience of Eataly when I’m in New York. I’m a tourist there.

I asked a few New Yorkers if they go to Eataly. Not a chance. It’s for tourists, they said. Duh. Why would I schlep to Eataly Toronto for groceries, when the parking is challenging and things seem a bit more expensive than where I usually go for stuff that’s as good?

Do you need to go to the restaurants? For actual sit-down, order a meal and be served it, there are three: Fish and two pizza ’n’ pasta. Just for the hell of it, I went to Eataly for lunch one day and then walked into a random Italian pizza ’n’ pasta parlour in nowheresville on Dupont Street for dinner. The two places charge about the same for pizza. At Eataly we lined up for just shy of 10 minutes to give a cell number to a harried attendant who texts you when a table opens up. The first time we tried to eat there, a Thursday at 7 p.m., they said the wait would be between an hour and three quarters and two hours. We left. The second time, at lunchtime, they said the wait would be 20 minutes. We stayed. The third time we copped two seats at the bar right away.

Two sit-down pizzerias at Eataly: One is Neapolitan and the others is, in the waiter’s words: “Chicago-style deep dish.” The Neapolitan one is called La Pizza & La Pasta.

The crust was not lovable, neither crisp nor sufficiently blistered. And it tasted a tad sweet, which I disliked. The topping was about as good as what you get at our cool local pizzerias. We also ordered the most expensive pasta on the menu for $29, agnolotti filled with pork and veal, with white truffle butter. Needed salt. No truffle taste.

We did much better at the other pizza place, La Piazza, where the pizza was almost deep dish and the crust was crisp. Toppings were very good, just as good as Pizzeria Libretto. But the $14 lettuce salad had a mascarpone dressing that was too sweet and heavy.

Both pizzerias had hurried harried servers, as befits the most popular game in town, and both look cool — as does all of Eataly. And neither is worth the trouble. You can eat better and easier at a local spot.

But you have to go see it. Grab a house cocktail, a pink ’n’ pretty Aperol Spritz. Walk around with it. You’ll feel cool. Snack on cannoli. They’re wonderful. Buy takeout food if you don’t feel like cooking. One visit will suffice.