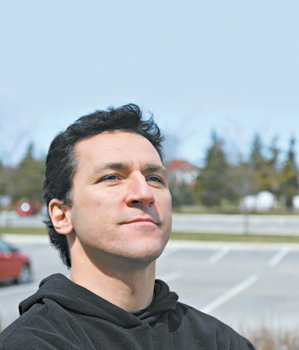 IT’S HARD TO be certain, but I seriously doubt that T.S. Eliot could ever land a quadruple toeloop.

Likewise, and in all fairness, I doubt if Elvis Stojko could pen written works that would afford him a Nobel Prize.

Then again, perhaps jumping to such a conclusion about the famous Richmond Hiller is a mistake. Talents seem attracted to the 37-year-old — a former Canadian kung fu champion, stage and film actor, author and now musician as well — like moths to the light. And yet the two share an important and intrinsic connection, for it was Eliot’s words that changed Stojko’s life.

In March 2006, while awaiting a flight in a Florida airport, Stojko was approached by a fan for an autograph. Afterward, Stojko realized the fan had left behind the book she had been carrying. The image of a figure skater on the bookmark clutched between the pages caught his eye, but it was the words below that grabbed his attention:

What we call the beginning is often the end / And to make an end is to make a beginning.

The quote seemed to say exactly what Stojko needed to hear at that point in his life.

Canada’s focus had last been fixed on Stojko at the 2002 Olympics in Salt Lake City, where he finished eighth, a disappointing follow-up to silver medals in 1994 and ‘98. After the games in Salt Lake, Stojko decided to retire from the amateur circuit and follow the path to the professional skating world as Canadian predecessors Kurt Browning and Brian Orser had done before him.

During the 2002-2003 season, Stojko travelled the United States as part of the Champions on Ice tour, completing roughly 65 shows from April through August. In the same year, he did his own Canadian tour, SK8, as well as one-off shows for television, including Kurt Browning’s Gotta Skate.

Over the next few years, as the weeks and months fell off the calendar, and as the kilometres piled up through touring, something happened: skating lost its magic.

Despite the glory of the titles, the podium climbs at Lillehammer in 1994 and Nagano in 1998, the recognition and renown, the simple fact remained: Stojko was miserable.

“At the time I wasn’t loving skating anymore,” he says. “I wasn’t getting the same feeling. It was numb to me. You can’t lie to the crowd. They know when you really love to be out there, and the last little while I wasn’t feeling the same connection I had had to the sport.”

For Stojko, the words on that bookmark — to make an end is to make a beginning — seemed directed at him. And so, a few months later, after a charity show in Barrie, Ontario in 2006, Elvis said goodbye to the rink.

Elvis had left the building. Returning to Mexico, which had become his home, Stojko also returned, perhaps unknowingly, to the pastimes and activities of his younger days in Richmond Hill years before.

“I came from sort of a country boy background,” he says of the 50-acre farm he lived on before a move with his family to Richmond Hill in 1983, where his father owned a landscaping company.

“It was a small town, and the energy there was great,” he recalls. “I used to dirt bike around the area. Richmond Hill was absolutely fantastic to me. I think [it] was the perfect place for me to grow up. I’m not a city guy, so being north was great. I’d go in [to Toronto], do my work that I needed to do, train, and then I could go home and relax.”

In Mexico, Stojko spent time dirt biking and hiking, camping and simply roaming around the countryside. He spent a lot of time with friends, and even more time on his own “just rediscovering a love for life away from the rink,” he explains.

Part of this rediscovery included reconnecting with a love for music. Stojko’s father, a classically trained tenor, had been a singer for 40 years, so the younger Stojko was always surrounded by song as a kid.

He started to dabble with lyrics, and he found the experience liberating. “It really showed me that it’s not always about being number one, and always pushing the envelope,” he says. “Just to express how you feel is very, very fulfilling. And after a while you’re like, ‘I don’t want to have a shield on anymore.’ You know, you want to be vulnerable. You want to be open. And then you really understand that you are strong, even without the armour.”

Today, he is working on the release of his first album — title yet to be disclosed — which he describes as “adultcontemporary.” The album was recorded in Fenwick, Ontario, with studio owner Mark Lalama, who has worked with artists including Susan Aglukark, Amy Sky and Kalan Porter. A release date of September 1 is in the works, pending securing a distributor.

Stojko is well aware that such a undertaking will come with its detractors, the people who think that a skater should stick to skating.

“Some people are not going to like it, and that’s fine,” he says. “But you can’t follow that. Then you’re trapped in a prison of what other people think.”

Such a description might well capture the mental and emotional constraint that Stojko was feeling when he left skating back in 2006. Luckily, one Sunday evening in 2008, following a 12-hour day of dirt biking though dried lake beds in Mexico, Stojko found himself in front of his computer screen, searching for the author’s quote that had had such a profound impact on him two years before.

Typing into the search engine, Stojko couldn’t believe the first return that crossed his screen.

And with the end of all our exploring / Will be to arrive where we started / And know the place for the first time.

The next morning in Mexico, Stojko strapped on his skates for the first time in two years. “I had no idea that I was going to go back and skate, but it’s sort of like it came full circle,” he says. “I got back on [the ice] and it felt different. Really different. There was a newness to it.”

The king had returned.

A number of shows and circuits have already been lined up for the fall across both Canada and the United States, as well as Europe. “Interestingly enough, the path has led me back to skating,” states Stojko, “And I didn’t expect that. But I’m going by my feel.”

With a forthcoming album and a fresh outlook on skating and on life, it looks like a new beginning for Stojko. Or perhaps an end, depending on how you look at things.