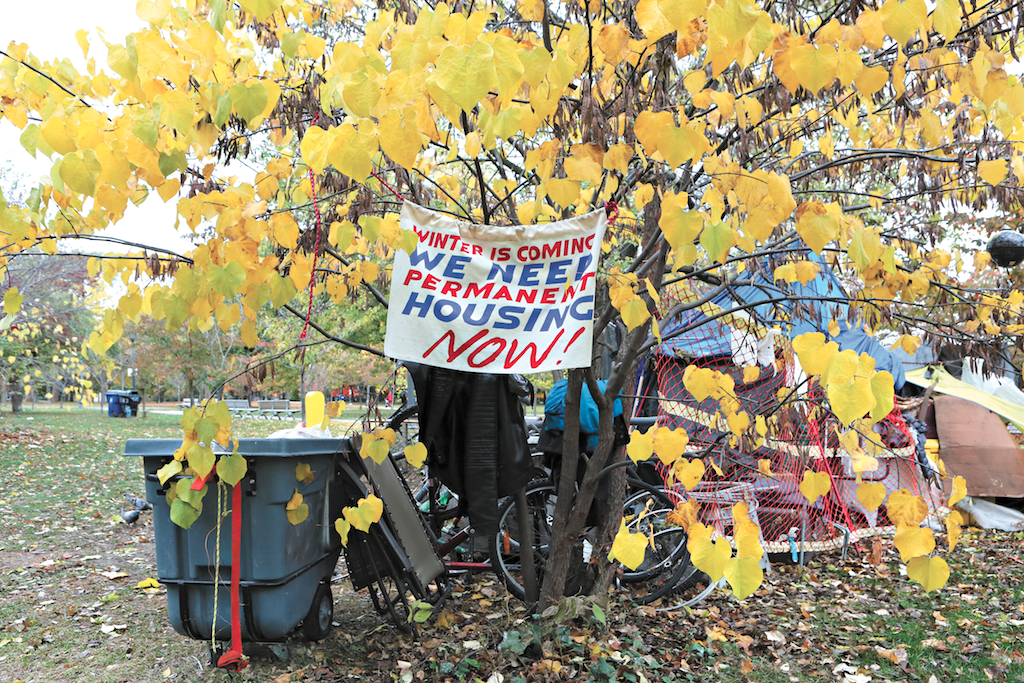 With temperatures decreasing and COVID-19 cases continuing to rise across the city, people experiencing homelessness are in need of safe housing now more than ever. However with shelters operating at reduced capacity and the fear of contracting the virus in a cramped setting, encampments have become the shelter of choice for many.

From Moss Park to the valleys in Rosedale, downtown Toronto is brimming with encampments. In parks such as Trinity Bellwoods, the state of encampments has changed since the COVID-19 pandemic first hit, so much so that an increase in the number of encampments has led to heightened concerns about the safety and well-being of those living outdoors.

“[In the past] where people might have stayed in respite centres or Out of the Cold programs, those in need don’t feel safe doing it anymore because of COVID-19,” says Alyssa Brierley, executive director of the Centre for Equality Rights in Accommodation (CERA). She explains that the pandemic has made many feel unsafe due to the lack of distance, reduced capacity, curfews, bed checks, theft, assault, sanitation and pest issues at shelters.

The increase in encampments can be pinned to other reasons as well, such as release of inmates in Canadian institutions at the onset of the pandemic. There were about 6,000 fewer inmates in Canadian institutions between February and April 2020, according to Statistics Canada. “Many were discharged from detention facilities without discharge plans and those convicted of minor offences are also those who are typically lower income and less likely to get bail,” says Brierley.

Unaccounted for are also the hidden homeless, meaning those who may not be on the street, but who sleep in a car or crash on a friend’s couch. These individuals were likely asked to leave when COVID hit, causing a further bottleneck in the shelter system, added Brierley.

But what about the rise of encampments in non-traditional sites like Trinity Bellwoods and Rosedale?

“Moving to Trinity Bellwoods, given the size of the park and its location, provides a connection to community spaces and it remains close to other services such as Parkdale and Queen West Health Centre,” says housing rights activist Zoe Dodd. Whereas places such as Rosedale Valley are becoming increasingly popular for encampments because it is a more private location.

To date, the city has not announced any plans to clear the parks, but it has declared that encampments are illegal. In a recent court ruling, the city declared that parks are not places to live but rather that they are community resources intended for shared use by all members of the public. The city also alleges that encampments are not safe, noting that there have been frequent incidents of violence and human trafficking, fires and unsanitary conditions in the various tent encampments in city parks.

“There lie two competing interests that the city must resolve,” says Brierley. “The first being that during a time where gathering indoors is unsafe, people are relying on public spaces more than ever, while on the other hand, members of the public who need the parks the most are those who have nowhere else to go.”

Many homelessness advocates have raised the issue that the city is not doing enough to protect individuals experiencing homelessness during the pandemic. The most recent statistic, in December 2020, details that to date, there have been 663 COVID-19 cases linked to shelter outbreaks.

In the City of Toronto’s 2020-2021 Winter Plan, an additional 560 shelter spaces will be created through a combination of shelter beds, hotel programs and supportive housing units between November 2020 and April 2021. This number includes 100 spaces at the 24-hour respite site on the CNE grounds, 150 beds in hotel programs and 90 hotel beds to replace the Out of the Cold program.

The city also released new shelter design guidelines on Jan. 11 based on best practices and advice from those with lived experience. The guidelines include adding community space inside shelters, creating a home-like setting with pet-friendly options, providing privacy and offering choices, and supporting measures for infection prevention and control, harm reduction approaches and physical and mental health supports.

However even with these new guidelines and spaces, Steven Foster, an outreach volunteer with the Encampment Support Network says it’s still not enough to help those living in encampments.

“560 news spaces is less than in prior years and vastly short of the number of people living outside. The conservative estimate is 1,000 people sleeping in encampments, but this doesn’t include those sleeping on trains, doorways, alleyways,” he says. “[The] city ought to declare a moratorium for encampment evictions. In doing so, they might then support encampments in material ways — emergency and fire supplies. It might lend itself to the city acknowledging that they are not able to accommodate everyone living outside.”

Foster also recommends that the city include increased capacity for emergency shelters.

“They should be in a position to offer everyone the option to sleep in a shelter, but also to respect someone’s choice to live in an encampment. The city should stop evicting people and support homeless people through providing facilities like bathrooms, showers, water,” says Foster.

Brierley agrees that the city needs to provide more supports for people who are choosing encampments over shelters.

“Sleeping in a tent is currently the least bad option. If this is the best option people have, what does that say about our system?” she says.