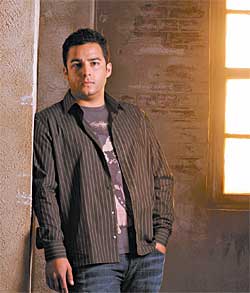 ENNIS ESMER IS standing in the dark on the stage of Earl Haig Secondary School’s Cragin Hall for the first time in more than a decade.

“This was definitely my favourite place in high school,” says the 30-year-old actor. “It’s the first place where I performed.”

It’s also the place where the students hosted assemblies, put on Hair and Carmina Burana and where Esmer performed his first comedy skit that was not lifted from Bill Cosby. It’s where his career in theatre, comedy, film and television originated.

Thirteen years later, the Torontonian’s new CTV show, The Listener, is about to air as a part of NBC’s Thursday night Must See TV lineup, the very one that once was occupied by the very shows that inspired him as a kid: The Cosby Show, Seinfeld, Friends and ER. On June 4 at 10 p.m., The Listener will premiere simultaneously on NBC and CTV.

The drama, set in Toronto, tells the story of a young paramedic who can read people’s thoughts. NBC and CTV have ordered 13 episodes. Craig Olejnik stars as Toby Logan, the paramedic with paranormal powers, and Esmer as Osman Bey (Oz) is his sidekick paramedic.

Esmer was born in Ankara, Turkey, and moved to Canada when he was three. At St. Andrew’s Public School, he was bitten by the acting bug, playing a few different characters in Little Shop of Horrors and attending his first drama class.

“It was the first time I had ever taken a class like that,” says Esmer. “But for an overweight, emotional kid whose second language was English and whose name was a letter away from the word ‘penis,’” he says, acting was a way of channeling his insecurities. “Once I figured out how to make fun of myself before anyone else could, I was good to go,” he says.

Esmer moved on to Earl Haig Secondary’s Claude Watson program in Grade 11 and took improv and experimental theatre classes. When he was elected to student council, one of his responsibilities was to produce the school assemblies, which became miniature talent showcases.

“It was my first taste of putting on shows, getting people to audition for them and all that stuff,” he remembers. “It was all laying, albeit in a ridiculous context, groundwork for the things that I would do later for money.”

For his parents, who are both systems analysts, a career in acting was about as bizarre a concept as possible. “I know that they brought me here for different opportunities, but I don’t think they imagined that getting [killed] by an alien in a science-fiction comedy would be one of the opportunities I’d have,” Esmer says, referring to the 2004 Canadian film Decoys.

From these beginnings, Esmer found success in television and film projects. He landed the job of hosting The Toronto Show, an hourlong variety program that showcased Canadian comedic and musical talent. He shot 120 episodes of The Toronto Show over four or five months.

“Ultimately, I have fond memories of the learning experience,” he remembers.

“For something that had a relatively nominal impact on my career it was actually a great way to learn the ropes. It was great to have all that air time and experience in a live-to-tape environment, but what I really wanted to do was act. Unfortunately, because of the time restraints, I didn’t have a lot of freedom as a comedian. I was finding that film and TV acting was something that was bearing a bit more fruit at the time.”

These fruits included Billable Hours where his one-appearance character, the “ethnically ambiguous, cantankerous janitor,” became a series regular. For The Path to 9/11, a six-hour miniseries on ABC, he researched his part to ensure his terrorist character was a human being rather than a caricatured villain.

Young People F***ing, which came on the heels of the ABC miniseries, was a fan favourite at the 2007 Toronto International Film Festival (TIFF). “It was a thrill to be a part of it. I’ve known [writer] Aaron Abrams since I was 12. We went to Earl Haig together,” he says. “With all the success of the movie and the exposure of it, it’s been an unbelievable experience. Considering I had two auditions, a day of rehearsal and four days of shooting, what’s come from that has been phenomenal. It’s gone beyond what I ever expected it to do for my career.”

As Esmer walks toward his alma mater, he notices that the neighbourhood has changed a lot. He barely recognizes the Black Sheep Pub where he used to come with friends after school. Sonic Temple, a used cassette store where he went after school to buy collector’s edition hip hop tapes, is now closed down. And the convenience store on Spring Garden Avenue, where he went to play video games, has been replaced by new restaurants and bars.

But then, as he walks down Princess Street toward the modern high school that was rebuilt in 1997 (while Esmer was in his OAC year), recognition and nostalgia flashes across his face. One would expect Earl Haig to be nearly deserted at 4:30 p.m., but it appears this is not a school that students want to leave. There is a soccer practice underway, a handful of students are taking down school council election posters, and others are playing Hacky Sack in the front courtyard.

Inside the school, he finds one door to the auditorium that is slightly ajar. This space is the only part of the original building that remains. Esmer stands on the dark stage and looks out over the rows of 600 empty seats.

“There was so much going on artistically and creatively that it wasn’t the type of place you wanted to get away from when you went to school,” Esmer remembers. “Next time I do standup for six people at an open mic night somewhere downtown, I can think about the time that 500 children were herded in here and forced to listen to me.”

Esmer has come a long way since his days in front of the Earl Haig student body. His method may still be comparable to those high school days, but his audience just keeps growing bigger and bigger.