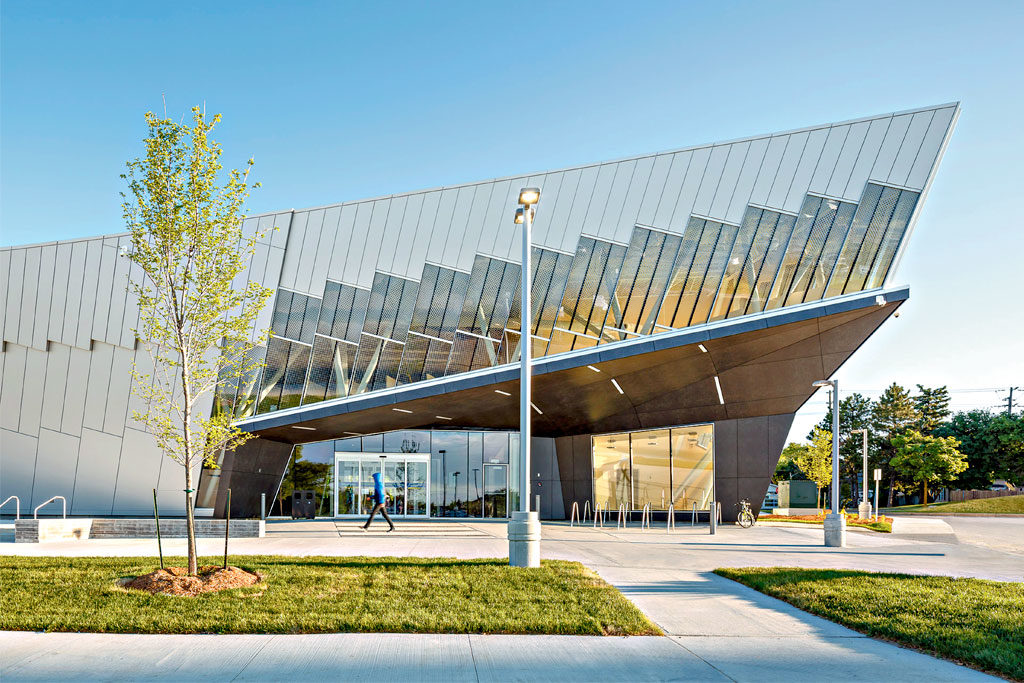 From strip malls to subdivisions, the suburbs often get a bad rap, when it comes to urban design and architecture, but that doesn’t mean there isn’t plenty to celebrate.

The City of Vaughan is in the midst of just that, accepting nominations for its Urban Design Awards, recognizing the best in sustainable design, heritage projects, high-quality architecture and other enhancements to the public and private realms.

It’s the first time since 2012 the city has hosted the awards (they’re accepting nominations until Sept. 22) and indeed there’s plenty of change to celebrate.

A likely winner is the Civic Centre Resource Library which, if you live in the Thornhill, may be beyond where you typically travel.  The library has already rightfully received laudatory press, and its swooping exterior design (allegedly inspired by the nearby roller coasters at Canada’s Wonderland) makes it instantly iconic, but the inside is even more impressive. I walked in for the first time last summer, shortly after it opened, and it’s hard to say what was most impressive. There’s a small café, a station where you can borrow iPads, a recording studio, a courtyard, a sun deck, an amazing amount of natural light and almost nothing (well, aside from books!) that makes it feel like the library you went to growing up.

Just across the parking lot (eventually it will be a civic square) is Vaughan city hall, itself a huge improvement on the old concrete bunker it replaced. Although a friend and I are apt to refer to it as the “Vaughan Mahal,” it definitely helps make the statement that Vaughan is a city in its own right. (That said, the steps — and maybe the biggest wheelchair ramp I’ve seen — going up to the front door drive me a bit crazy.)
Markham’s own civic centre, designed by Arthur Erickson, is nearly 30 years old, but Richmond Hill is on the brink of creating a new civic district.

The hiring of Jack Diamond to do the Richmond Hill Centre for the Performing Arts, not to mention his firm’s previous work on the central library, demonstrates a similar understanding that we deserve our fair share of beautiful buildings, and they both capture what we’ve become and demonstrate how far forward we can still go.

Other changes to the local landscape include the new Spadina line subway stations, which will start operating later this year. Lucky visitors have already been getting tours, and the stations definitely look impressive. The UFO-esque 407 station seems a bit random, sure, but the Pioneer Village station, at Steeles, and Vaughan Metropolitan Centre (VMC), at Jane and Highway 7, are instant landmarks. Some have sneered, as cynics like to do, that the money spent on such bold design is a waste, but when you’re bringing transit to the suburbs, there’s nothing wrong with taking the opportunity to make a statement.

I feel the same way about the Viva Rapidways. Although you can focus on the buses and ridership, the real key is how those canopies redefine the streetscape and how the addition of landscaping, urban lighting and bicycle lanes are fundamentally and literally changing the shape of our communities.

Both around VMC and up and down our major thoroughfares, highrises are changing the skyline, some nicer than others. It’s going to be a constant challenge for our politicians and civil servants going forward to ensure a high standard of design is maintained, especially after generations of cookie-cutter development.

Preserving our past, of course, is just as important as building that new future.

In Thornhill, the historic Robert West House will open to the public after receiving accessibility upgrades, and right next door, the century-old carriage house — most recently a sad Mac’s Convenience Store — is being transformed into a handsome-looking pub. (Although they’ve been working on it so long, I’m wonder if it’ll qualify for the 2022 awards.) Across the street, new streetscaping has transformed the sidewalks through the Yonge Street heritage district into places you might linger instead of racing through to get to Tim Hortons.

From the public art and carousel in the burgeoning Markham Centre to the sustainable Oak Ridges Community Centre, beautiful public and private spaces are popping up all over, and not a moment to soon.

For a long time,  we were complacent as our historic towns were transformed into sprawling suburbs, but expecting something better is part of growing up. So is demanding better and so is celebrating how far we’ve come.