Faceoff: Should speed limits on Toronto’s streets be reduced to prevent fatalities? | TRNTO.com
Skip to content 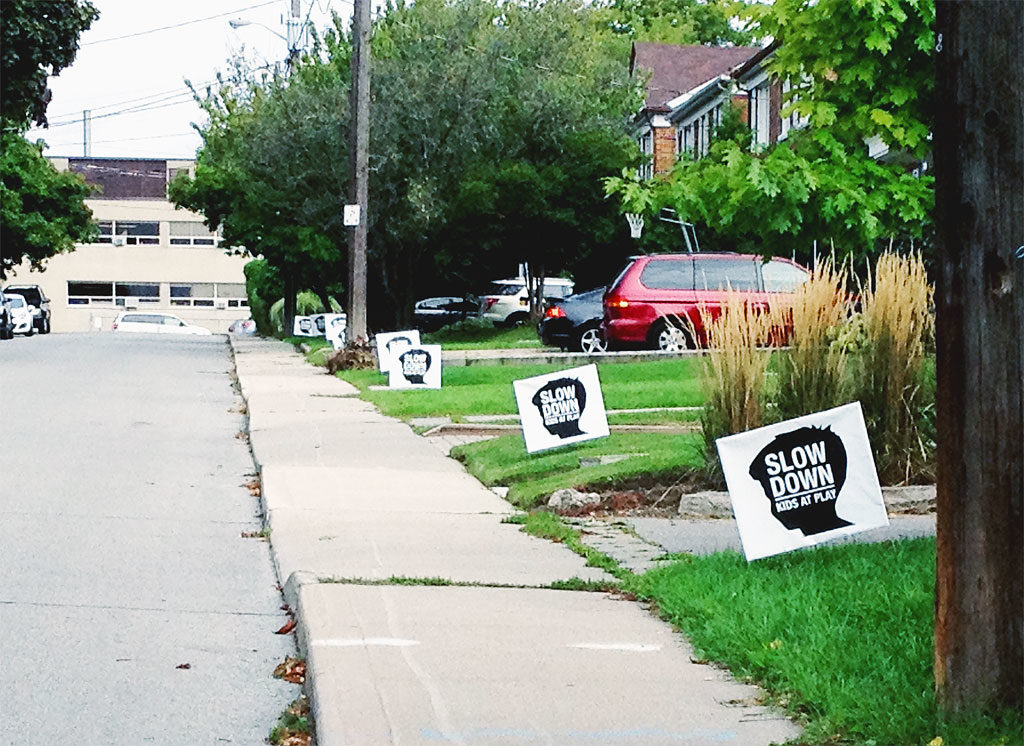 The proliferation of “Slow Down — Kids at Play” signs in neighbourhoods across Toronto, in the wake of the death of a child hit by a vehicle in Leaside this July, shows that there is widespread demand for reducing speed limits to 30 kilometres an hour (km/h) on local streets in all parts of the city.

Indeed, in Walk Toronto’s electoral survey, 92 per cent of candidates and 100 per cent of the 24 responding incumbents supported the idea.

There is good reason for this support — pedestrians in slow zones are much safer.

At 30 km/h, less than 10 per cent of pedestrians hit by a car will be killed.

As well, slower drivers have more time to react and so are less likely to hit a pedestrian in the first place.

But it’s not just about safety — lower speeds also create a friendlier community.

Streets are a neighbourhood’s public space, but fast traffic discourages residents from spending time outside on their street and getting to know each other.

These are the reasons why cities around the world are already slowing their local streets and, increasingly, other streets as well. New York City has just made its default speed limit 25 mph (40 km/h) for all streets unless otherwise marked.

Slower speed limits are most effective if accompanied by changes to the street that encourage slower speeds, but that doesn’t have to mean speed bumps.

There are many less aggressive ways to encourage drivers to go more slowly, such as narrower lanes, trees along the street and sidewalk bump outs, which also make neighbourhoods feel more appealing in the process.

Slower speeds create cities that are not only safer, but more attractive.

Founder and director of Stop100.ca, a group that supports a speed limit increase on 400-series highways.

A typical driver will drive slowly, at 40 to 45 kilometres per hour (km/h), through a busy subdivision with driveways and children, even if the posted speed limit is 60 km/h. A typical motorist driving through a less busy street posted at 40 km/h, will likely ignore the low limit and continue driving at 50 or 60 km/h if such speed is more appropriate and safe.

Police constables often make up for bad laws by using their logic and reason, and they frequently choose not to enforce laws that are not set with proper engineering in mind. This can be easily observed on the 400-series highways where a low speed limit of 100 km/h is ignored by most drivers and police.

Speed limits should not be set politically to appease groups of local residents, but with proper engineering principles in mind.

Safety is always of the utmost concern for Stop100.ca. As studies have shown, safety is not always achieved by reducing speed limits, but also by setting proper limits based on science and engineering principles.

On most city roads and highways, the 85th percentile speed limits are the safest ones: they guarantee voluntary compliance by the majority of motorists and less interactions between vehicles (passing, following too closely, etc.) and less resulting collisions.

Residential streets could benefit more from warning signs in accident-prone areas, rather than reducing speed limits.

The main culprits of most vehicle crashes and deaths are typically inattention and distraction, which is confirmed by the recent announcement of the Minister of Transportation, Steven Del Duca, to increase fines for such behaviour. The Minister also spoke out against blanket 40 km/h speed limits in Ontario. The Ministry’s own statistics confirm little effect of speed on road fatalities: 6.7 per cent of all fatal vehicle collisions in 2009 were attributed to exceeding the posted speed limit.​