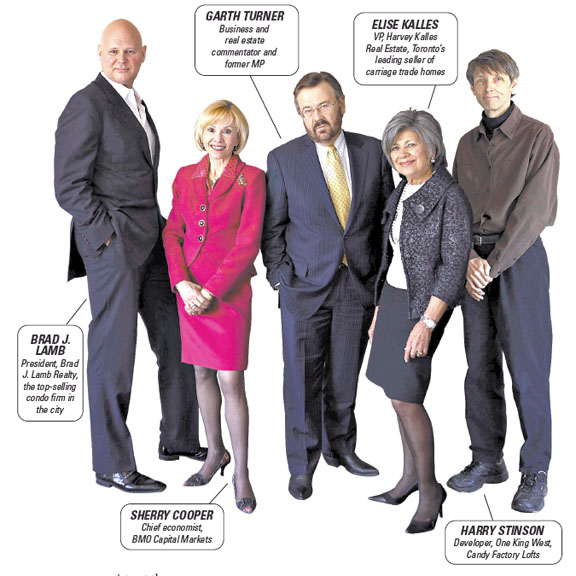 POST: When we met in the spring, you experts were optimistic about the future of Toronto real estate, and rightly so: the market soared through April, May and June. But July saw a major drop-off, with only 6,564 homes sold compared to 9,967 the previous July. So what’s happening? Is this just a seasonal trend, or is something more precipitous ahead?

Garth Turner: You say that the experts were “optimistic” about the future of Toronto real estate at the last chinwag. Not so fast, editor! I was decidedly grumpy at the event, forecasting that the second half of the year would see a substantial correction,with the possibility of a multi-year price melt after that, reminiscent of what has hit many U.S.cities.

And I was right.

Sales have declined now for a string of months, and prices have begun their descent. Listings swelled and have now contracted — and this all adheres to a classic pattern of spent markets. My only surprise is that anyone should be surprised. Give it up, expert dudes. You choked.

Sherry Cooper: Toronto’s housing market is merely cooling down. Home prices are just off recent record highs — some correction. Home sales are returning to more normal levels after hitting record highs around the turn of the year. Listings have gone up but not terribly so. The market is becoming better balanced.

Turner: Sherry, you’d have made a damn fine realtor. “Balanced” is the industry’s favourite word. I think David Lereah used that description in 2006 when he told Americans the market was correcting normally, home sales were returning to pre-boom levels and there was no cause for concern. Five years later the U.S. middle class is gutted … Surely you do not want a statement like the one you just made to go on your record? Just askin’.

Cooper: Garth, surely you aren’t comparing the housing situation in the U.S.to Canada. Since when did our mortgage lenders make loans to people with no income, no assets, no money down and no documentation?

Harry Stinson: While it has not been my historic behaviour pattern to agree with bankers, I would tend to agree with Sherry on this perspective.

Many of Garth’s points are valid, but overall I think that real estate, particularly in Canada, remains one of the more comforting places to invest.

Cooper: Our bank and all of the others qualify people based on interest rate levels that are significantly higher than current “teaser” levels. It is, however, true that a small proportion of homeowners with recent mortgages might be in over their heads if they lose their job or interest rates rise sharply, but there is a very low loan-to-value ratio in Canada.

Stinson: Even if Garth’s “facts”are correct, if there is one thing that Canadians are passionate about, it is their complete discomfort with passionate behaviour. You can yell “fire” in a crowded Canadian theatre and the audience will respectfully shuffle out in an orderly manner or possibly even wait for an official-looking person to issue instructions. I certainly recall the early ’90s slowdown (when Brad and I worked together selling condos). Indeed the market slowed down and prices did recede, and many people were disappointed that hoped-for riches did not materialize, but there was no sense of serious panic. Most people simply resigned themselves to holding on … And life went on.

Elli Davis: Perhaps I am not the “normal” realtor in the central core of Toronto, but I have experienced an excellent June and July and have several new listings in August.

They are selling at about two per week and I am far ahead of 2009 sales figures.

The HST impact was nil, as far as my business is concerned, and I feel that the “slowdown” is based on seasonal rather than economic factors.

Cooper: The recent clear signs of slowing in Toronto (and Canada) housing markets were in fact widely predicted by almost every mainstream economist out there through the spring (based on the tighter mortgage rules, the HST and higher rates). We saw a classic pulling forward of activity from the second half into the first half of the year, so just as the underlying market strength was exaggerated by the huge sales gains in the first half of 2010, the weakness is now being exaggerated by sharp sales drops from a year ago.

Turner: I appreciate Sherry’s attempted recovery, especially the part about “almost every mainstream economist out there” predicting a real estate correction long ago. In fact in this very magazine in March, when I was warning of a convergence of negatives for real estate, Sherry boldly said: “Frankly, I believe that Canada is going to be a real magnet for money. The money’s going to come in to stocks and bonds,but it’s going to come in to real estate,and it’s serious money. And we are seeing it already.” That sure doesn’t sound like a note of caution to me, and you are the quintessential mainstream economist … At least you are backpedalling now. That’s something.

Stinson: Well, Garth, I think you can cross BMO off your list of possible financing sources, should you ever need any.

Davis: This year has been much healthier than last year, and the listing inventory is low in certain pockets and certain buildings. The listings that are still on the market after 30 days need a price reduction and that is the best prescription for a sale. Toronto has always been price sensitive, and if the seller is truly interested in selling and will listen to educated advice, success will follow. The slowdown in sales in the carriage trade is more seasonal than economic.

Stinson: I totally agree. The general level of motivation is pretty slack during this season. There are far fewer clients looking around, and vendors are not taking the sales process as seriously

Turner: I admire people like Elli, and it’s obvious what the foundation of her success is. However, the economy is not eternal, and it seems clear we’re in a period of deflationary angst. Those with wealth may be more insulated than the average household, but real estate is a fairly integrated commodity, and the journey from Etobicoke to Leaside to Lawrence Park is dependent upon rising incomes and accumulated wealth. That chain is being broken by this economy. I would pay it heed, even when toiling on the carriage trade.

Brad Lamb: As usual, Garth chooses the end of the world scenario, which is right only once … You really need to listen to what consumers of all levels of real estate are saying. We are seeing the market ease off the accelerator after getting ahead of itself.

The HST is causing prices to rise this year by a few percentage points. While resale volume is down from highs, it shows that there is tremendous liquidity in the market with a mid-6,000 unit volume and 33 days as the time to sell.

Sixty-six hundred July sales would normally indicate an 85,000 sale year, which is a strong annual number … All in all, the market is fine and will continue to chug along without any real incident. Garth, I think you’re wrong here; however, sometime in the future, I am sure we will see a real estate correction in Toronto. It is unlikely that will be any time soon.

Elise Kalles: We are still optimistic in the market. An 85,000 sale year is definitely a strong year.I agree with Elli: we’re still experiencing bidding wars this summer, and if there is a slowdown, it’s seasonal, not economic. The summer is slow historically, and the attendance to open houses for new properties has diminished to less than half. My only worry is that buyers read Garth’s predictions!