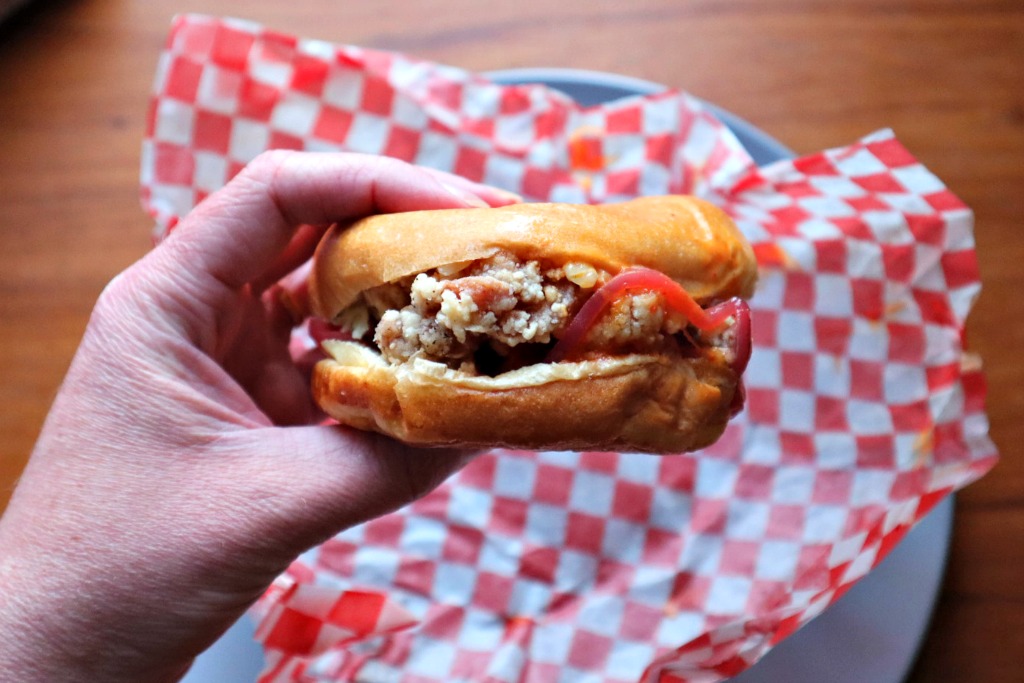 Pivoting to takeout and delivery has been a particular challenge for Toronto’s upscale restaurants, many of which have menus that don’t easily translate from dine-in to take home. While some have overcome the hurdle by introducing meal kits or special set menus, others have focused on warming our hearts with unfussy, comfort food fare.

Chef Brandon Olsen has temporarily closed his French restaurant La Banane, instead focusing his takeout efforts on Brando’s Fried Chicken (who can blame him? Fried chicken is certainly more delivery-friendly than sea bass en croute). Olsen had previously hosted occasional fried chicken pop-ups in the pre-COVID era but, since early April, he’s been making it available for takeout from Tuesday to Saturday. The brief menu includes buckets of fried chicken, chicken sandwiches, and sides like macaroni salad, plus his signature CXBO chocolate bars for dessert.

Brandon Olsen isn’t the only chef catering to our comfort food needs with fried chicken during the pandemic. Canis chef/owner Jeff Kang has partnered with Omai chef/owner Edward Bang to create a new takeout pop-up dubbed Kang Bang Fried Chicken. Chicken combos are served with fries and slaw, and you can choose from varying spice levels for your seasoning. Aside from chicken combos (which range in size from two pieces to a whole bird), they’re also doing sandwiches, chicken tenders, and kimchi. You can add bottles of natural wine or sake to your order if you want to make it fancy.

Grant van Gameren’s stylish spots like Quetzal and Bar Raval continue their temporary closures but his casual burger joint, Harry’s Charbroiled, is open for business and slinging out patties. Although the restaurant’s brick-and-mortar location closed last October, Harry’s returned for pick-up and delivery in mid-April. The menu stays simple, offering just a handful of different burger options (including the Red Burg with red chorizo, cheese, pineapple, and jalapeño mayo) and wedge fries.

King West’s Marbl restaurant has added a number of comforting classics to its American bistro menu since making the move to takeout and delivery. In addition to long-running menu staples like Chinois prawns and tuna nicoise, the restaurant is now serving up hearty fare like Shepherd’s Pie with braised lamb, peas, and a mashed potato crust; and macaroni and cheese with a housemade cheese sauce.

The team behind upscale plant-based restaurant Avelo had been planning to launch a new vegan Italian restaurant on Queen West, but the pandemic combined with the sudden passing of their pizza chef prompted them to switch to a vegan pizza concept instead. Named after their late chef Dualco de Labio, Pizzeria Du features plant-based pies served on a crust that the chef had spent two years perfecting. In addition to takeout pizzas, they’re offering pizza kits and a small selection of grocery items.