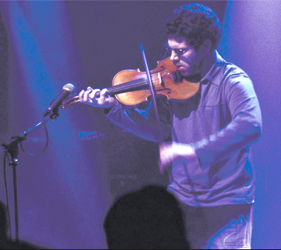 ACCLAIMED FIDDLER ASHLEY MacIsaac has been in and out of
the spotlight over the last two decades for his music, for selling a stake in
his career on EBay, even for yelling obscenities to an unsuspecting
audience as part of a performance art project. He defies convention and
pushes the boundaries of what it is to be a Canadian musician.
And he’s back.

Just 34 and after living in Toronto for the last decade, MacIsaac had
settled down with his partner Andrew MacIsaac (née Stokes), married
since 2007. Now, with a new traditional record released on the east coast
and a solo pop album to come, MacIsaac looks ready to return to the
spotlight.

“I plan on getting a lot busier with the new record,”says MacIsaac, who
plays Hugh’s Room in Toronto on Nov. 13. “I’ve got seven titles for it at
the moment. I was going to call it Crossover and do two albums, but
everyone’s doing that, so it’s not cool any more.”

MacIsaac has one foot firmly in the traditional Cape Breton fiddle
scene, where albums are sold from the trunks of cars and off the stage but
the “money is good,”and one foot in the mainstream, where an album may
take “three to six years from start to finish.” He has a unique perspective
as a result. “I feel more blue-collar than most artists, I imagine,” he
explains. And it was this blue-collar MacIsaac that drew the fiddler from
the comfy confines of Toronto to the border city of Windsor in
southwestern Ontario.

“Windsor is very blue-collar, and there are lots of Cape Bretoners,” says
MacIsaac. “I don’t think I picked up my fiddle more than three times at
home in the 10 years I lived in Toronto. In the first week here, I had 65
Cape Bretoners at my place bringing biscuits and rum and playing fiddle
all night long.”

There are legends aplenty concerning young MacIsaac, a prodigy from
his beloved Cape Breton — hanging out with the likes of Allen Ginsburg,
being trumpeted by the late, great Peter Gzowski at the CBC, who
introduced MacIsaac to a wider audience.With charisma and rare talent,
MacIsaac combined his fiddle prowess with his love of rock ’n’ roll to
create a riotous blend of new music. He exploded in popularity in the
mid-’90s with his breakthrough Hi, How Are You Today? featuring nowclassic
songs such as “Sleepy Maggie.”

Following that album, he was
productive, but also plagued by a number of problems, from label
mismanagement to personal issues, and never rose to those heights again.
But, being Ashley MacIsaac, he could continue making records for
another two decades and people would still pay attention. But his interests
have broadened to include a foray into politics and a desire to return to
university.

“I’ve got more interest in doing other things with my life as well as
being a recording artist,” says MacIsaac. So what does he think of
Stephen Harper’s recent move into the musical realm? “What a shame.
He had the opportunity to perform with the greatest cellist ever,” says
MacIsaac.“Why couldn’t he perform better? I’d rather hear Freddy Kruger
sing it.”