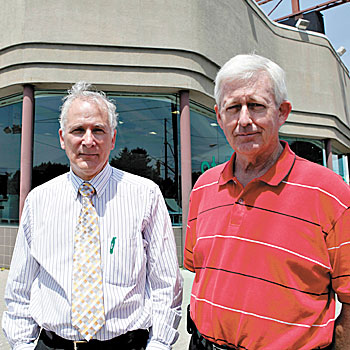 While Last Month the committee of adjustment (COA) voted down development plans for a proposed Bayview Avenue and Broadway Avenue grocery store and LCBO site because of size and traffic concerns, most say the decision was the first battle in what will likely be a long war.

“It’s crystal clear that the developer’s strategy is to bring his application in front of the OMB as quickly as possible,” said Coun. John Parker, who has fought in opposition of the site, alongside Coun. Cliff Jenkins, as its location at 1860 Bayview Ave. (the former Brennan Pontiac dealership) virtually borders the two wards.

In November 2009, when plans first came to fruition, owner MJB Corporation sought approval at the COA instead of applying for a zoning bylaw, the usual route for this type of development. When the plan was rejected, the developer applied again in July for a minor variance, after making only small changes to the plan. “This shouldn’t be a variance, this should be a full rezoning application,” said Jenkins. He said the COA is for projects such as adding a garage to a house, hence both councillors believe the developer chose to apply with the intention of appealing to the OMB where there might be more of a fighting chance to win the case.

However, if the case does go to the OMB, there will be fierce opposition. Locals in the area have formed a residents group because they think the 75,000-square-foot site plan, which also includes loading areas and two parking levels, is just too big. “They’re basically putting up a building lot line to lot line,” said Keith D’Souza, a member of the group. He said, as well, the service trucks and customers coming into the retail space will likely cause widespread traffic and parking problems.

While Michael Goldberg, the developer’s lawyer, said there has not yet been a formal decision to appeal, Jenkins said that, if it does happen, the city is prepared. City council recently passed a motion to ensure that lawyer and representation costs in the case would be covered.