Fighting for life in Africa | TRNTO.com
Skip to content 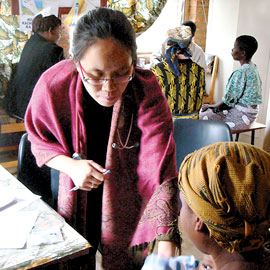 In stark contrast to the waiting rooms with flat-screen television sets at St. Michael’s Hospital in Toronto, is the waiting area of the HIV clinic where Dr. Adrienne Chan also works in Malawi, Africa.

“Sometimes it’s so busy that people are housed on the floor,” Chan says, “with the rats and the bugs and the dirt.”

As the medical co-ordinator for Dignitas International — a medical-humanitarian group that is dedicated to improving access to HIV and AIDS drugs and preventative care for people in the developing world — Chan spends 10 months of the year residing in Malawi and the other two in Toronto as a physician specializing in infectious diseases.

“I love that about coming back,” she says. “I get to see the best of what medicine has to offer and what we can aspire to. Everybody deserves to have the best.”

Chan has been working for Dignitas since 2007. She provides access to life-extending antiretroviral drugs, which help prevent HIV from developing into AIDS.

“Those drugs have revolutionized HIV treatment in Africa,” she says. “Since Dignitas has been there, since 2004, last week we put our 10,000th patient on those drugs.”

Around 70,000 people live in the district that Chan serves, which has one of the lowest doctor-to-patient ratios in the world. According to Chan, an astonishing 18 per cent of the adult population is HIV positive.

The organization also provides HIV testing, counselling, support, pediatric care and interventions. Chan decided to get involved in international health in 2005, after a life-changing visit to Zimbabwe. “I was going to be an academic physician, focusing on clinical work,” she says. “I came back from Zimbabwe and basically said, ‘Now I want to go and work in Africa.’”

“ I came back from Zimbabwe and basically said, ‘Now I want to go and work in Africa.’”

She spent the next year planning the most effective way to make that happen. While at Harvard University, she attended a lecture by Dr. James Orbinski, one of the cofounders of Dignitas. After the lecture, Chan introduced herself to the man who, coincidentally, had also spoken at her University of Toronto convocation.

“I felt inspired by the mission of Dignitas and their philosophical approach to doing international work and development work,” she says.

Chan is currently the only Canadian and the only doctor working in the HIV clinic. Most of the staff are Malawian, which she finds inspiring.

“When you are confronted with the huge inequity between Malawi and Canada, it inspires a whole bunch of different feelings — it inspires rage, it inspires sadness,” Chan says. “You really want to try to do something to change the system that has allowed such inequity to happen. Chan says, when she’s back in Toronto for those two months of the year, she likes to de-stress by visiting her family in the same North York home that she was raised in and by taking advantage of local food luxuries, like drinking Tim Hortons coffee and going to Terroni for a mushroom salad.

But Africa always calls her back.

“I have all these skills, I have all this training,” she says. “I’m at a place in my life where I can leave my comfort zone and move to a place that needs me more.”