Fine dining on the subway: more NYC weirdness for Toronto to copy | TRNTO.com
Skip to content 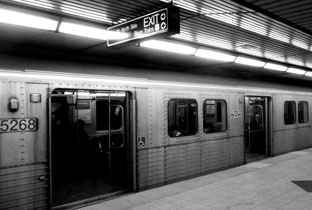 Toronto’s food scene may be on the verge of going underground (figuratively speaking) but how about literally underground? Like TTC underground? After all, nothing could be more appealing than the thought of dining on black garlic and morels while on the screeching, jolting subway. Well, the coast is clear for Toronto to experiment with fine subway dining because New York City has done it first.

According to The New York Times, a formal luncheon was staged aboard the Brooklyn L-train last weekend by a group of supper clubs. Diners, who were enticed by the promise of a “clandestine dining experience,” were invited to meet at the North East Corner of 8th Ave and 14th St, where they were escorted onto the subway and treated to a luxurious, six-course lunch that included filet mignon, foie gras and caviar. Makeshift tables — complete with holes to fit water glasses — were tied to subway railings with twine, and guests were served by gloved waiters and a maître d’.

The feast lasted for about half an hour as the train proceeded to make its usual stops (some passengers were invited to take the seats of no-shows). Apparently, there was no sign of the cops, but bigwigs at the Metropolitan Transportation Authority weren’t impressed when they found out what went down. “A dinner party on the L train?” Charles F. Seaton, a spokesman for the authority, told The Times. “No. Subway trains are for riding, not for holding parties.”

It was a lunch party, Mr. Seaton, and we could have sworn subway trains were built for the express purpose of holding parties. So now we’re left wondering: when is this going to hit Toronto? Charlies Burgers, we’re looking at you.