First Look: Toronto gets a taste of neo-Neapolitan pizza | TRNTO.com
Skip to content 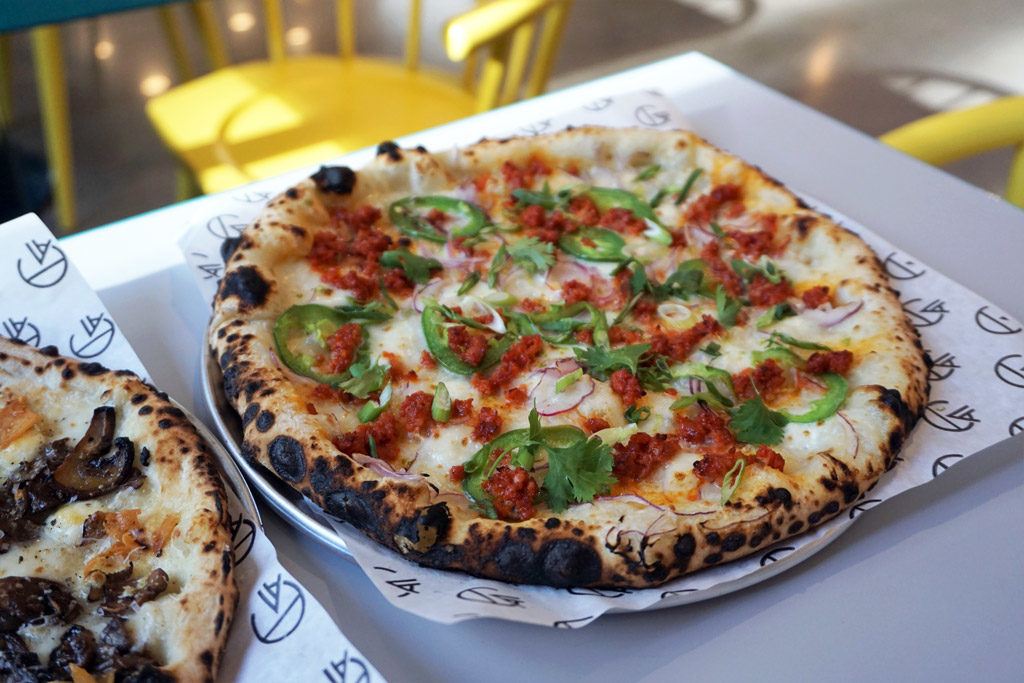 As of today, Toronto has a new downtown source for pizza with a niche, Naples-meets-New-York pedigree.

The owner of General Assembly, Ali Khan Lalani, who is also a certified sommelier and pizzaiolo, explains the restaurant’s name and meaning: “The ‘General’ speaks to the industrial leaders who built beautiful items (like General Motors, General Electric); they were pioneers in their field and for us, this reflects the heritage of pizza and its artisan roots. As for the ‘Assembly’ component, it speaks to the act of meeting and socializing (similar to gathering for a school assembly). In this case, we congregate for pizza which by nature, is a very social activity.”

Located at the corner of Adelaide and Peter, the heritage building (once a fur wholesaler and retailer), has been transformed into a place for pizza. Its concept is a niche entry into the Toronto dining scene and they're aiming for fine fast-casual, straddling the realm of fast-casual outposts and casual but pleasant sit-down restaurants. 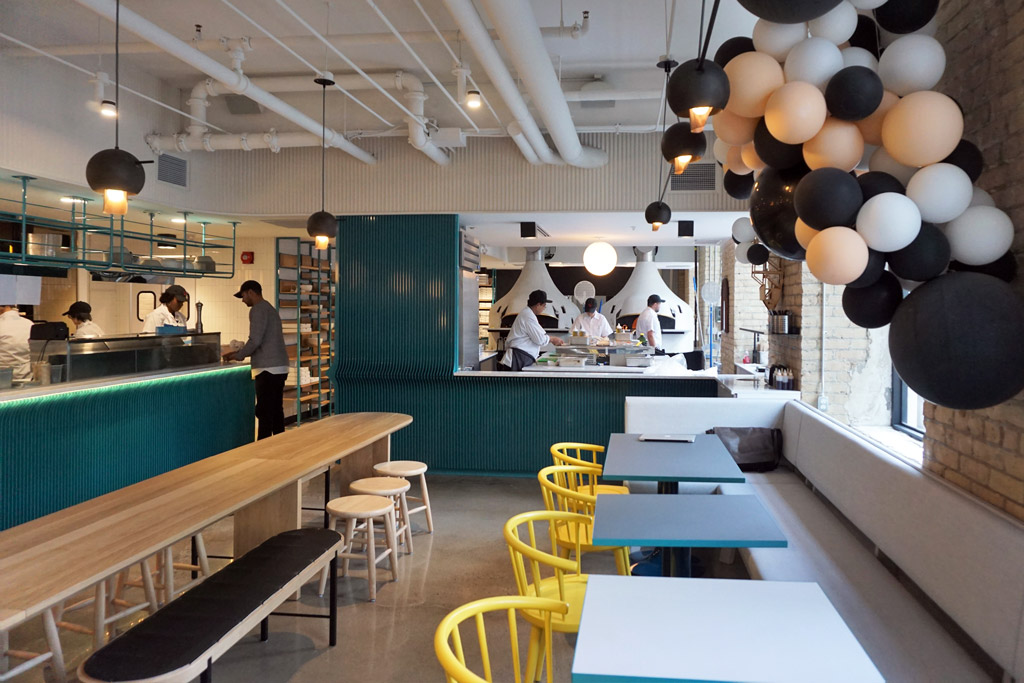 Commute Home’s (Alo, Byblos) design offers welcoming touches with a balance of artisan and modern elements. Along with a “General City” skyline of mini model skyscrapers that line the back wall of the bar and charcuterie area, they also have a “dough showroom” where guests can see pizza prepped from scratch.

Lalani explains that the pizza room is part of the whole “assembly theatre” aspect of dining here, which puts food on stage. It also reinforces the artisan and handmade aspects in lieu of plastering signs everywhere that cite these qualities. 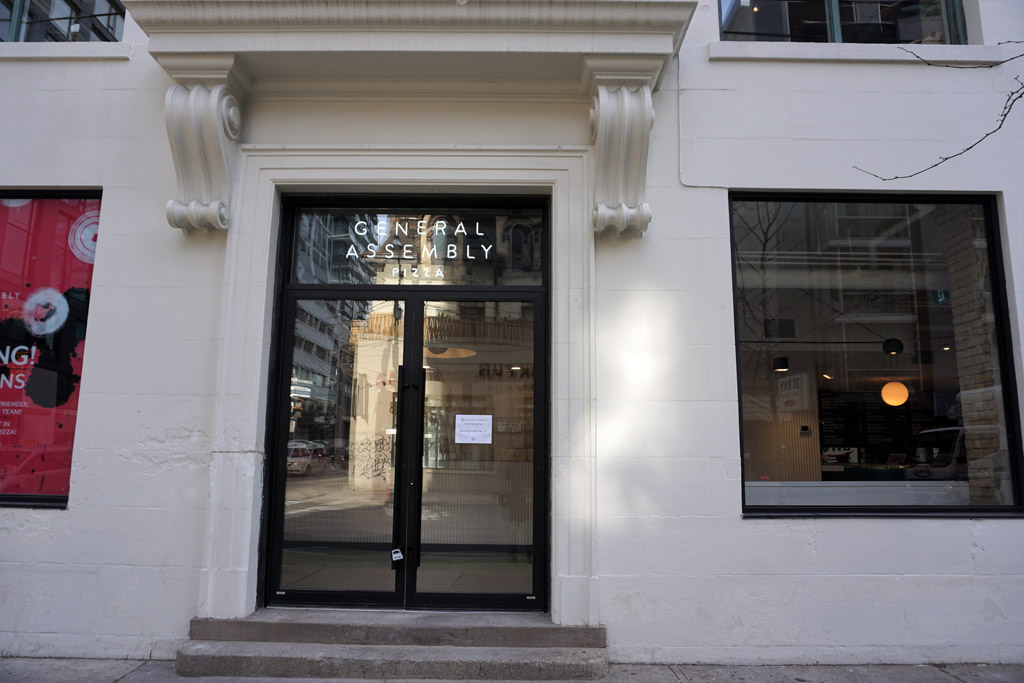 The large windows that face Adelaide Street allow natural light to stream in and shine on the splashes of turquoise panelling, shelves, yellow chairs and communal seating in the centre. To pay homage to the heritage building, the original concrete floor and exposed brick remain untouched. The space seats 75 people in total.

To bolster flow and efficiency, there is also a dedicated entrance and waiting area behind the two ovens for delivery and take-out with a grab and go fridge. Currently, General Assembly has partnered with Foodora and Ritual; they will consider UberEats in the future once they get a feel for volume of demand.

As for drinks, there’s a brief wine and beer lists that features local options. Keeping with the quick and efficient style, the cocktails are on tap. These drinks were developed by Shane Mulvaney, a cocktail consultant whose previous work includes developing bar items for Dailo and The Chase. 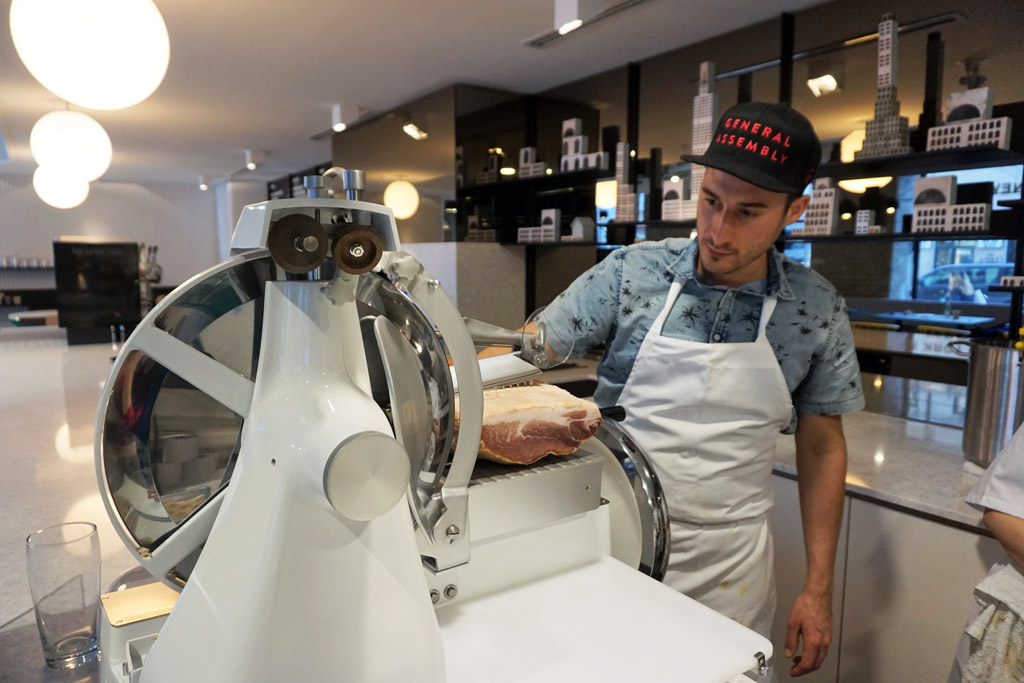 The food menu is divided into Pizza, Snacks, and Salads. The concise menu was a collaborative process between chefs Cale Elliot-Armstrong (Splendido, Terroni, Canoe) and Chef Anthony Falco, an international pizza consultant who pioneered the concept of “Neo-Neapolitan” pizza in Brooklyn.

Falco helped lay the foundation to ensure that the pizza dough itself was robust in flavour and prepped “the old school way” with lots of labour and patience.

General Assembly uses the wild yeast culture Falco brought from Brooklyn to make all the pizzas. It is five years old and apparently is already absorbing flavour notes from Toronto’s environment. Other influences include the type of flour they use to “feed” the yeast — a blend of Italian 00 pizza flour and unbleached all-purpose flour from P&H Milling in Hamilton.

After the initial mix, the chefs use a front-loaded fermentation process including a 24 – 48 hour period where the dough sits in a cool fridge. By the time the pizza is ready to be cooked, there’s no need to do anything else (no extra proofing) except lay on toppings and pop it into the oven. Chef Falco says that this method allows for a slow, natural fermentation; the rest periods and wait time allow for the development of flavours while accounting for and balancing out the structural integrity of the final product (the crust).

To cook the pizzas within 60-90 seconds, General Assembly uses two large clay ovens that were specially imported and assembled brick-by-brick on site. The ovens are from Acunto, a family-run business from Naples, which holds a reputation for their oven craftsmanship. Lalani says they are currently the only restaurant in Toronto to use these types of ovens. The structure and build allow for the ovens to retain a roaring heat of 800°F – 1000°F.

The chefs describe the pizza style as a New York and Neapolitan hybrid (Neo-Neapolitan), which means using Italian techniques and embodying the philosophy of using what’s around you to showcase local ingredients and fresh flavours. Therefore, not every ingredient has to be from Italy. Instead, they cherry-pick the best ingredients from around the world to make great tasting pizza. The chefs explain that it is not about being rigid and elitist; having fun is what’s at the heart of their food. “At the end of the day, it is about how delicious our food tastes and I think it’s damn near perfect,” chefs Elliot-Armstrong and Falco muse. Wherever possible, the chefs do try and showcase ingredients from Canada like cheese, vegetables and flour.

The Don Diego is a highlight of the pizza section. It combines familiar Mexican taco flavours and is topped with cheese, ground chorizo, cream, onion, jalapeno, cilantro and lime. 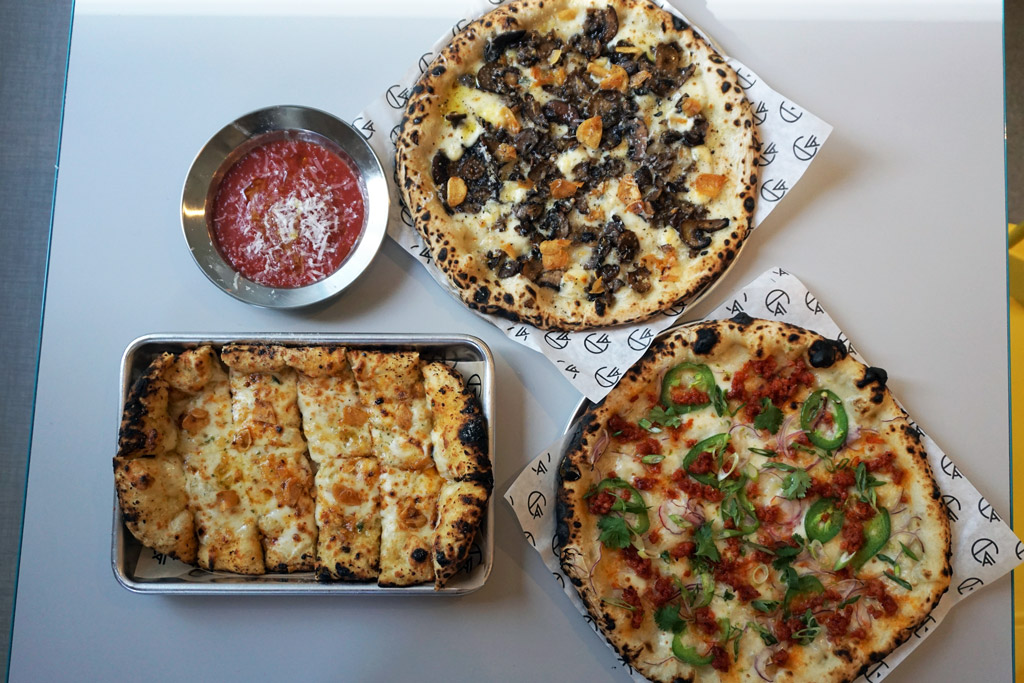 As for snacks, the General Bread is a gooey cheese lover’s delight. It uses the same dough as the pizza, aged mozzarella and grana cheese and is topped with fried garlic slivers, aleppo pepper and finished with wild oregano. It is served with a house-made marinara sauce that's drizzled with olive oil and grated parmesan.

The Meat Plate sees a melange of meats which include cacciatore, jamon iberico and prosciutto; it is served with house-baked crostini. 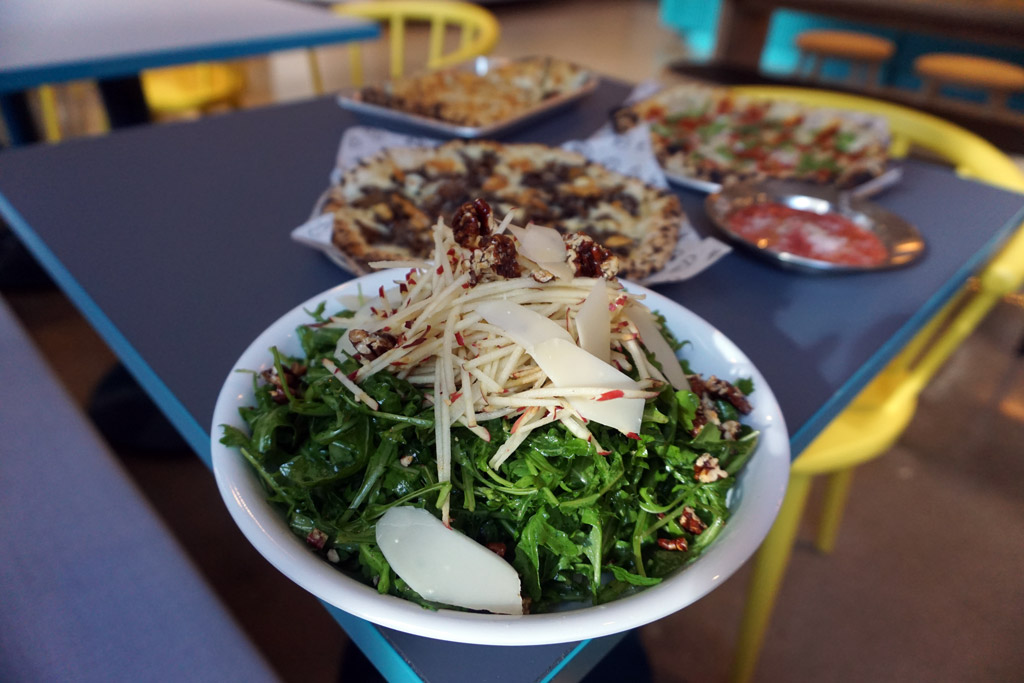 Arugula Apple is sweet and acidic salad; a mountain of bitter arugula is tossed with olive oil and lemon and the salad is topped with shaved parmesan and candied pecans. 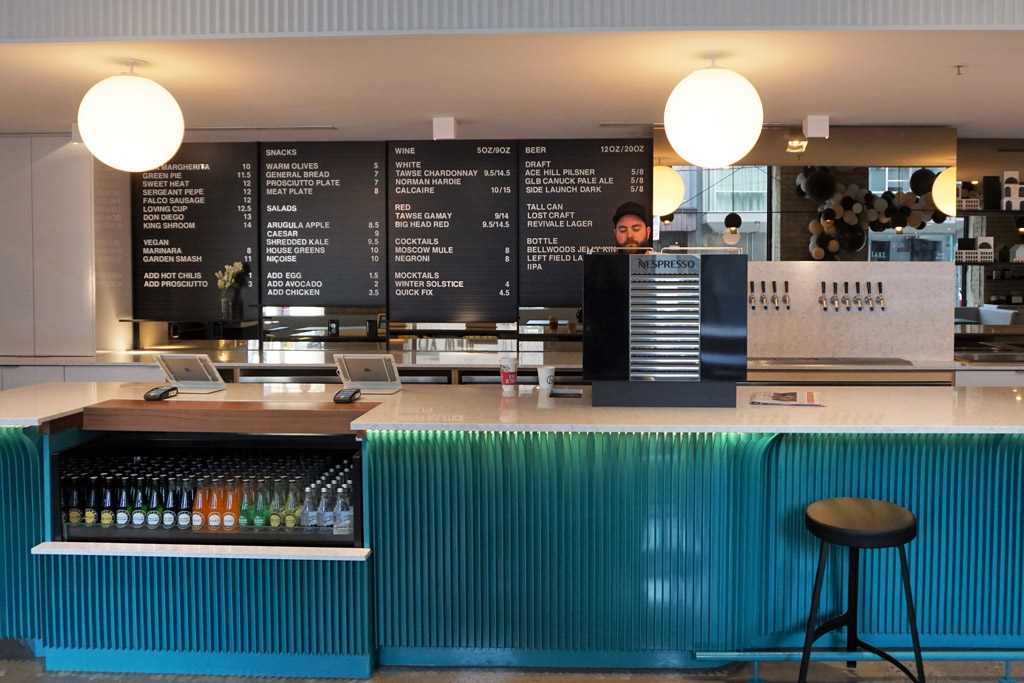 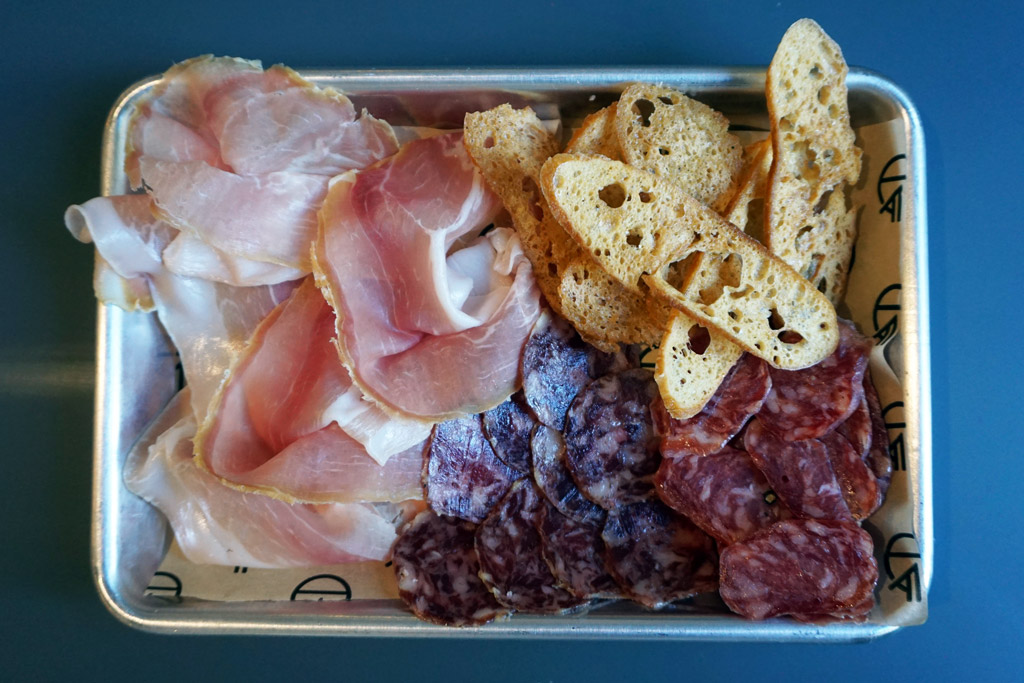