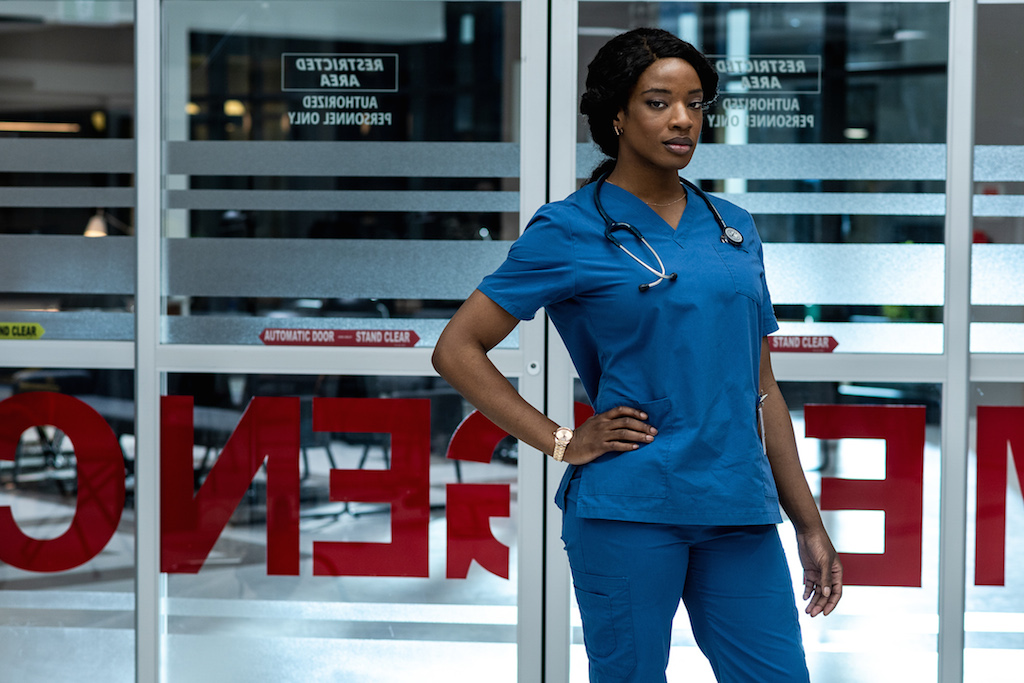 Actor Ayisha Issa earned a Prix Gemeaux for her portrayal of Brittany Sizzla in the highly acclaimed French Canadian series Unite 9, a role for which she also nominated in 2017. Currently, Issa stars as Dr. June Curtis in the CTV series Transplant.

The series follows Dr. Bashir “Bash” Hamed (Hamza Haq), a Syrian doctor who flees his country with his younger sister Amira and arrives in Canada where he works to navigate a new environment and forge new relationships after earning a coveted residency at a hospital in Toronto. It airs Wednesday nights at 10 p.m.

While in quarantine, Issa has been on a “self-help rampage,” will all her newly found me time.

“While I’m currently exploring 10+ self-help workbooks the books I’m recommending today had a significant impact on my outlook and productivity in all areas of my life,” she says.

Ayisha Issa is the fifth in our series of Quarantine Reads. Here are five books that matter to her:

I’ve suffered from anxiety for most of my life and learning to give a little less of a f*ck made a huge difference. This book takes a humorous, down to earth and carefree look at life. It reminds you of the ways in which you might be taking yourself a little too seriously and shows you how that might be getting in the way, of getting what you really want out of life.

This book sat on my shelf for two years. One day I decided I needed to address some of my own intimacy issues in order to better serve a character I was playing. It’s about the underrated power of vulnerability and how fear and avoidance of being vulnerable can set off a chain of dysfunction, taking you further and further from yourself and keeping you stuck. I went from being a proud vulnerability avoider to an advocate. I still fall asleep to the audio version some nights.

The Obstacle is the Way by Ryan Holiday

I had a hard time with this one at first but it quickly became one of my favorite motivators. This book is broken up into small chapters and usually starts with a quick story about real people who achieved amazing success simply by facing down the obstacles in their lives. As a small business owner, it can be scary. Especially during times like this when the future is uncertain. This book reminds me of the silver lining and opportunities that exist in all situations for those who are relentless in seeking them out. I recommend this as bedtime audio as well.

I’m a scatterbrain. I was put on Ritalin in high school and still struggle with the typical symptoms of adult ADD. It’s always been difficult for me to stay focused enough to form any regular routines and change habits, mostly because I’m too distracted. This book broke down how habits work. How they are formed for better for worse and how we can use that understanding to form habits that help shape the life we want. Pairing the formula for habit building I found in this book with a tip found in the first chapter of The Obstacle is the Way, I quickly made a consistent habit of making my bed every morning. That sounds lame for a 36-year-old but it was a big deal for me and it set off a chain of habit-building that is keeping me both productive, relaxed, healthy, and feeling pretty good about this quarantine situation. On the flip side, understanding the negative habits I’ve developed in different areas of my life almost instantly robbed them of their power making them easy to repair nor replace. Again, I also own it on audiobook (lol).

Another one that sat on my shelf for ages. This is the first of over 10 workbooks I plan to complete over the next couple of months. I bought this one after finding out my ex had cheated on me but didn’t open it until I finally left almost four years later. This book is my new thing. It’s informative, easy to read, relatable, and gives you practical exercises you can do right in the book to help you work through some of the vile and toxic things you’ve been saying to yourself. I didn’t realize how hard I was on myself (and subsequently those around me) until completing this book. Messaging that is programmed into us as kids and evolves over time becomes a tool we unknowingly use against ourselves day in and day out. The consequences of this effect if and how we pursue our goals, who we date, our sexual health, depression anxiety, parenting, and everything in between. I don’t recommend the audio for this one, but you’re going to want to dedicate a notebook and a pen to how to show yourself some well-deserved self-care.