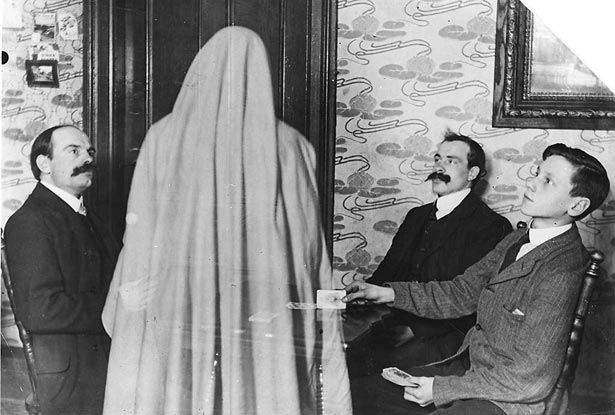 We hate to break it to you, but your favourite Toronto haunts are probably haunted — that is, if you believe in ghosts and that type of fourth-dimension stuff. If you do, Halloween is the perfect time to embrace your inner Robert Stack (or Peter Venkman) and investigate spooky things. So here are our top five haunted places in Toronto. Grab your proton pack and trench coat and get going.

Toronto’s funkiest hotel is also the city’s oldest continually-operating hotel, so that’s a pretty good sign that it’s haunted. And it just so happens that the Gladstone is rumored to be haunted by a piano-playing ghost. As long as he doesn’t play “Chopsticks,” we’d welcome the musical distraction.

If a place has secret tunnels, then chances are there’s going to be a few ghosts roaming around, including a stern-looking old man gazing out from a window (who’s probably Sir Henry Pellatt, the castle’s original owner), a British redcoat in the stable, a lady in white walking the halls and someone knocking in the tunnel. Sounds like a party.

You want some spook on the side of your strip loin? Then head over to The Keg Mansion. During the time the Massey family owned the mansion, Lillian Massey died in the second-floor bedroom of the house. Her ghost is said to be roaming the woman’s washroom on the same floor. Trumping Lillian’s apparition is the ghost of the hanging maid, whose body has supposedly been spotted dangling in the foyer of the mansion. Apparently the maid hung herself because of grief over Lillian’s death, or, she may have been knocked up by one of the Massey sons and couldn’t bear the shame. We’re going with the latter.

So it turns out the vacant Lower Bay Station isn’t so vacant after all. The TTC station, which opened for six months in 1966, is rumored to be home to a lady in red who is said to have no legs and just kinda floats above the ground, which is pretty helpful if someone wanted to dance with her cheek to cheek.

If you’ve ever gone to the Winter Garden Theatre and thought, “One of these seats is not like the other,” then you’re on to something. While the theatre was undergoing renos, chairs were shipped in from Chicago’s legendary Biograph Theater, including the last seat on which John “Public Enemy #1” Dillinger sat. Fittingly, Dillinger’s last chair is specially upholstered to point out its significance, but its weird energy probably gives itself away anyway (apparently the chair has “a mind of its own”). Special note: the notorious bank robber was gunned down outside the Biograph after attending a show with Anna Sage, who was nicknamed Woman in Red. We’re not saying Sage got sucked into some weird, ghoulish fourth dimension that has her stuck in the Lower Bay Station, but that would be pretty cool if it happened.