Flight of the Lang-inator: the Harlem Globetrotters come to town | TRNTO.com
Skip to content 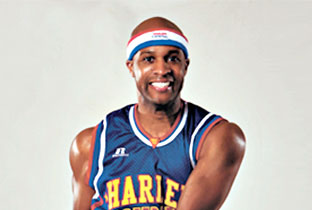 The Harlem Globetrotters are in town tonight and tomorrow, including the deft dribbler Herb “Flight Time” Lang. We chatted with him about basketball, his participation in reality shows like The Amazing Race, and the new four-point shot.

What’s your favourite tour stop?
I’ve been on the scene with the Harlem Globetrotters for 12 years. I definitely enjoy going to Arkansas. It never gets old.

And what’s been the best moment on this particular tour?
Just last Sunday, actually! I got a couple slam dunks and four, four-pointer shots in a row. That’s when the referee allows you to shoot from the four-point box.

Do you still get nervous before performances?
Not so much anymore. But even after doing this for more than an decade, I still get excited. I definitely love what I do.

Any tips for budding Globetrotters?
For me, I never imagined [this profession] for myself. It’s more than a dream come true. But I always tell people, even though you’ve gotta work on your game, the younger kids should focus on education first.

Who’s your favourite basketball player?
Kobe Bryant. Growing up, though, I was a Michael Jordan fan.

Speaking of reality shows, we understand you’re a huge fan. Can you tell us how you got into this?
I just like the people on the shows — they’re funny. Right now, I’m in The Amazing Race for the second time around with [fellow Globetrotter] Big Easy. We ran a good race the first time we were on the show, but this one’s a different challenge. It’s harder.

What’s your favourite reality show right now?
I’ve been watching a lot of Undercover Boss. I like the way the people react; I think it’s brilliant.

After you finish The Amazing Race, what reality TV show is next?
I’d do Dancing with the Stars. I’m pretty nifty with my feet; I’ve got moves.