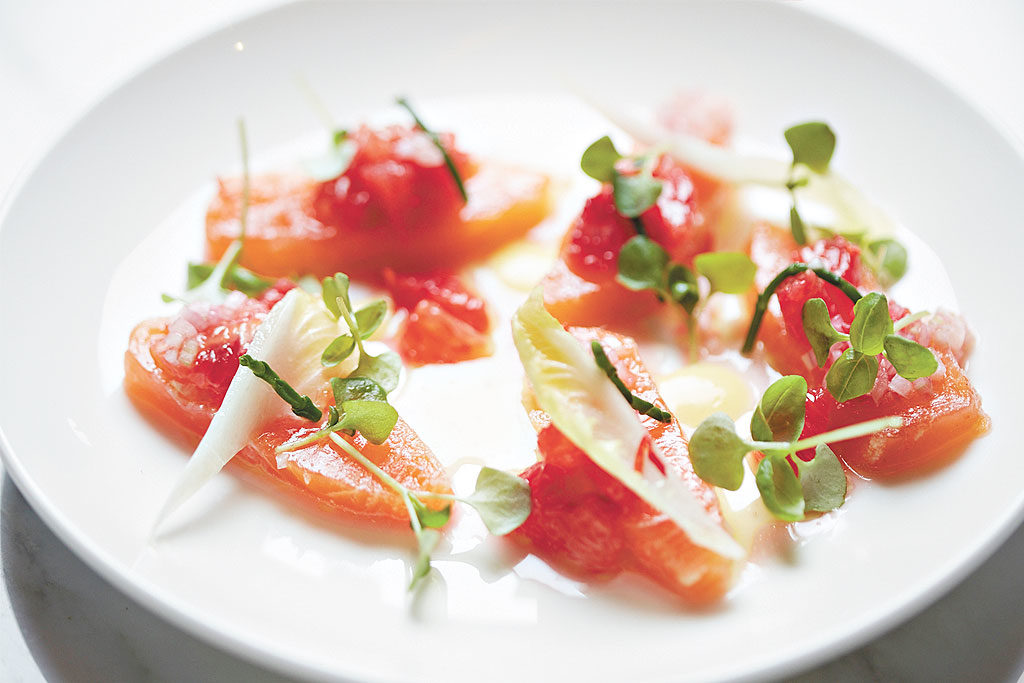 The strip of Dundas West between Ossington and Dovercourt has come a long way since its days as  a home to just Brazilian sports bars, Portuguese bakeries and churrasquerias.

In 2010, Enoteca Sociale led the way to this stretch of DuWest becoming a crosstown dining destination. Around the corner, Ossington has continued to flourish, and empty storefronts have been filled with inventive places to eat and drink.

Meet in the lovely park at the foot of Lakeview Avenue and plan your attack on one of the city’s hottest dining destinations.

The Fountain
This spot is to Hanmoto and Ufficio what the Press Club and Magpie were to the Black Hoof in 2009 — a rough-around-the-edges bar to hang out at while you wait for your dinner table. Dark ’n’ Stormys are the popular house cocktail. 1261 Dundas St. W., 416-262-4986

Hanmoto
Leemo Han’s restaurant feels like the five-years-later successor to the early Hoof. It exists on the idea that the food doesn’t need to be harmonious from dish to dish or arrive in a particular order as long as execution is faultless and the flavours are loud.

The only element it lacks is a Jen Agg equivalent. I don’t think she’d let service be as chilly as it can be at Hanmoto or the drinks presentation  as sloppy. 2 Lakeview Ave., 647-334-3005

Ufficio
At Ufficio, exec chef Jeffrey Bovis — along with consulting chef Craig Harding (Campagnolo) — is fighting a daily campaign to introduce T.O. to a new brand of Italian cuisine. Flavours are drawn from across the Mediterranean, and the focus is on seafood and vegetarian dishes.

Many tables start with the creamy-but-light house-made burrata that will open your eyes to the wonders of freshly made cheese. From there, it’s on to conserva di tonno — olive oil-poached tuna strewn with blood orange and celery. Pasta dishes include the porcini agnolotti, a house favourite which comes laced with truffle oil. 1214 Dundas St. W., 416-535-8888

Churchill
If Ufficio and Hanmoto are serving the best food on the strip then Churchill is having the most fun. They have a decent beer selection but their approach to food that really sets them apart. Instead of trying to go it alone, they’ve made a habit of opening their kitchen to rising culinary stars.

This spring, Luther’s Chicken, the previous kitchen-sharing tenant at Churchill, made way for Almighty Bao so that Luther’s can open a stand-alone chicken place. (Imanishi, now a full-fledged resto further west on the strip, popped up before LC.)

Items from the Bao menu, like the California club bao, embody bright contrasts by fusing Asian and western flavours and techniques almost at random. The irony of serving fried chicken with elements of a California roll on a super pillowy steamed bun is deep and layered, but this is also a remarkably delicious snack. 1212 Dundas St. W., 416-588-4900

Mr. Flamingo
The compact room, a bit further west on Dundas from Churchill, feels like both bar and restaurant at once. A seat at the bar is a great vantage point to take in this combination.
The Mister does a house burrata, very good pasta — such as gnocchi with green pea purée — and seafood. The dishes change frequently, but recently the fried cod cheeks were a standout.
An anything-goes concept for the menu — order a snack and a cocktail or a three-course meal — makes Flamingo perfectly suited for a crawl. 1265 Dundas St. W., 647-351-1100

Julie’s Cuban
Mojitos on the leafy patio of this Dovercourt hidden gem (the area’s go-to date spot for decades) make for a perfectly tranquil end to a crawl.

By this point, you’ll probably want to stick to snacks from the tapas section: frituras de maiz (peppery corn fritters) and the picadillo-stuffed papa rellena are particularly worth trying. 202 Dovercourt Rd., 416-532-7397