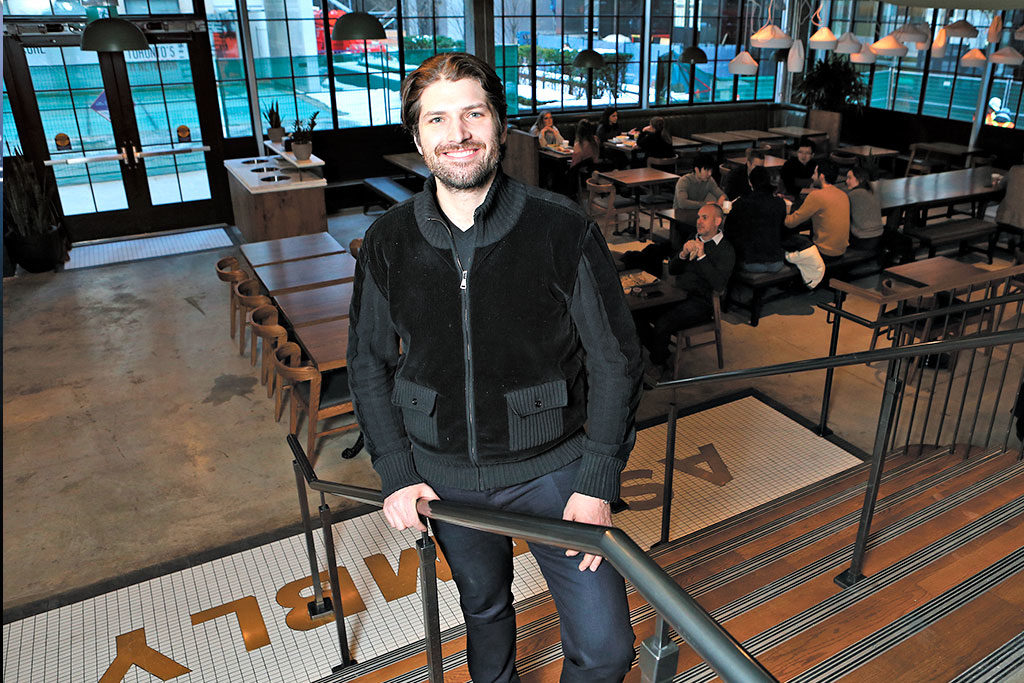 “Are you looking to be healthy or indulgent?” asks Andreas Antoniou, a second-generation Toronto food innovator, as we tour his new, fully licensed 24,000-square-foot food emporium, Assembly Chef’s Hall.

“Everything’s possible. That’s the kind of program we built, and that’s the one-of-a-kind program Torontonians deserve. For me, all that matters is food.”

The offerings, created by 17 of the city’s best chefs — some known, some unknown — are like a food court in heaven if God was into fried chicken, sushi and barbecued ribs. Featuring chefs like Vittorio Colacitti (the Good Son), Nick Liu (DaiLo) and Ivana Raca (Ufficio) partnered with Chopped Canada’s Brad Smith, this one-stop shop at 111 Richmond St. W. is meant to appease every manner of craving.

To help a rookie navigate the smorgasbord of Assembly Chef’s Hall options, the charismatic restaurateur and salesperson gives this pro tip: “Why don’t you get a Tromba tequila margarita on draft and poke around?”

Always eager to do our due diligence for the readers of Post City, we follow his advice and, walking past the two DJ booths, two gourmet coffee stations and an outpost of Tokyo Smoke — whose founder Alan Gertner was Antoniou’s classmate at UCC — we get a taste of the food wizard’s pleasure-obsessed vibe.

Part of the concept of the food hall is that the big-name chefs who run the fancy food stands actually appear at their restaurants. In the age of the celebrity chef, this is more novel than you might think.

And for Antoniou, it just makes business sense. His team handles bussing tables, electricity, licensing and all of the ancillary management conundrums that befuddle restaurateurs, leaving them to focus on the food. To hear him tell it, he’s a foodie evangelist, enabling chefs to concentrate solely on cooking while he pursues his mission of improving Toronto’s culinary landscape.

“We need to stop thinking about good things in Toronto as being ‘like Silicon Valley.’ This is Toronto, and yeah, it could exist in Silicon Valley, and it may, but that’s not our focus. We’re trying to build an incubator space right here for chefs to design and build their own restaurants within our ecosystem,” says Antoniou, a former private equity banker and university football star, who is tall and wears a Blue Jays cap and a five o’clock shadow. He’ll be marrying his fiancée in July. Perhaps no surprise, he was raised in the same area as Assembly — he grew up in a condo at Wellington Street and University Avenue.

“We’re bringing value back to the restaurant business model, and I know this place is great, not just for Toronto, but compared to anything around the world, because I have 17 chefs who share our singular desire: to concentrate solely on the deliciousness of the food.”

To recruit his food co-conspirators to Assembly Chef’s Hall, Antoniou dined out in the city on his own for a year and gained 35 pounds. (Before making his selection, he visited each of his 17 new partners six times.)

The mix of talent was important. But equally essential was a chef’s passion and drive.

He wanted true partners who were ready to work, innovate and add to the unique hive mind. On our tour, Antoniou introduces us to Ness Levy who manages Short & Sweet, a purveyor of handmade baked goods. Showing how the restaurants work together, Ness and his team have a spin on “bottle service” for birthdays, in which a cake is delivered to your table and the whole Assembly Chef’s Hall universe comes together to sing.

“It’s a good idea, and it doesn’t just help Ness. It helps everyone in the ecosystem because guests come here for a celebration that they can’t find anywhere else,” says Antoniou, who greets guests and restaurateurs alike on our tour, often stopping to sample cookies and bites of fried chicken and snapping Instagram-worthy shots of displays like the outrageous Bluenose Lobster stand, which boasts a heaping pile of glistening red crustaceans flown in from Nova Scotia.

“I’m not OK with the status quo, and I don’t accept that things have to be a certain way,” Antoniou says. “I always try and challenge, and I always, always want to make things better.”

To that end, he says the venue will host monthly food events in which the whole space might transform into a theme, such as Midnight in Paris or Full Moon Bangkok Party.

He dreams of expanding and intentionally leaves space open at the front of Assembly Chef’s Hall for a rotating chef.

It’s a community market of which Antoniou says, “There’s no better assemblage of chefs anywhere in North America.”

To hear him tell it, it just might be true. But then again, after choosing indulgent over healthy and enjoying our fresh, spicy afternoon drink, we’re feeling fairly intoxicated by Assembly Chef’s Hall and the confidence of its creator.

“The beauty of the venue is that it’s so flexible,” Antoniou says, with a smile. “The only limit is our imagination.”