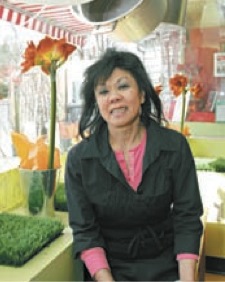 DINAH’S IS A happy place. Sunshine pours into the pale green room dominated by counters and coolers. Planters of orange tiger lilies and quirky fake grass patches alternate on the sill, these colours accented by the plastic coverings on just three wooden tables with chairs for sitting.

Mounted and hanging copper pots and soup pots draw attention to Dinah Koo’s new culinary adventure, the latest in her long line of successful endeavours in Toronto’s restaurant scene. Tiger Lily’s noodle house on Queen West may have been her most famous project to date, and some of those most popular dishes make a reappearance here.

The casual fare carte changes daily. Dinah’s incredible warm Kobe beef pastrami on marble rye ($7.95) needs neither mustard nor Swiss cheese. The thickly sliced meat explodes with flavour — thanks in part to Kobe’s marbling and tenderness. Dinah doesn’t skimp on the portions, either.

An edamame, cucumber and seaweed salad is given a vinegary, salty-sweet kick with snippets of pickled ginger. A small serving of the cool, crisp salad (priced by weight) is more filling than expected.

A $3.95 price tag for a single egg roll seems out of place, but that thought is extinguished quickly. Near-fluffy pastry bundles a mix of stir-fried vegetables in mild seasoning. It looks more like a dense croissant than an egg roll you might order somewhere on Spadina.

Peking duck “quesadillas” ($5.95) fly the coop faster than they can be assembled and displayed in the cooler — and for good reason. Soft, thick tortilla folds around slabs of sweet, hoisin-basted duck meat; sprouts; red pepper; and sesame seeds. There will be no sharing.

Plenty of tofu cubes swim in a flavourful broth made sour by vinegar and spicy by red peppers in hot and sour soup ($6.95). An abundance of wood ear fungus, chicken bites, red pepper slivers and bamboo shoot strips make this soup a mini meal in itself.

Not too big to induce personal- trainer guilt and not too sweet that the roof of the mouth tingles, Dinah’s pre-wrapped, house- made desserts make the perfect post-repast. Dense marble chocolate cheesecake balances savoury with sweet, and chocolate brownie — under a thin layer of sticky icing — boasts of much dark cocoa. A selection of take-away soups and sauces are available in the fridge and freezer. Immensely popular for catering.