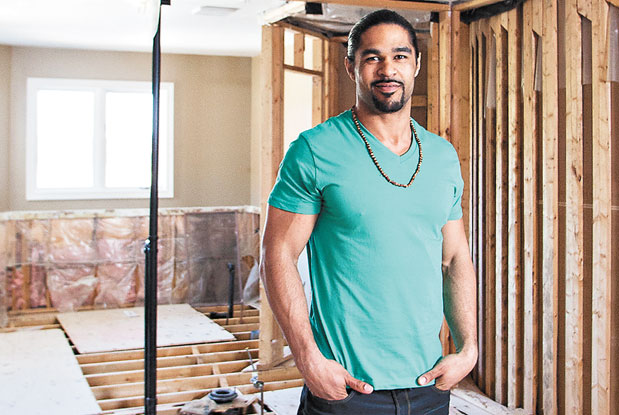 When a reality television crew showed up on his construction site, Sebastian Clovis knew his work life was about to get a lot more interesting.

Clovis, a builder and home designer, was working on independent contracts in the GTA when he was scouted out by HGTV Canada to host his own home renovation show, Tackle My Reno.

Although many fantasize about turning their daily grind into the stuff of TV magic, Clovis was never one to seek out the spotlight.

“To be honest, I’ve always considered myself to be somewhat of an introvert, so it was kind of funny that I ended up in this field,” he says.

Of course, he was not plucked out of total obscurity — CFL fans will recognize his name from his Grey Cup-winning run with the BC Lions in 2006.

Few of those fans, however, know of Clovis’s second career or that he’s been developing his building know-how for just as long as his athletic skills.

Growing up in the east end of Toronto, Clovis was a track and field and football star by the time he reached high school.

At 15, he also began to nurture a passion off the field. His parents planned a kitchen renovation, and knowing of their son’s budding interest in construction, they negotiated a deal with the contractor that allowed Clovis to apprentice with him during the project.

It was a perfect fit. Clovis landed himself an annual summer job until he left for university on a football scholarship.

“I worked really well with that contractor and we built a great rapport,” recalls Clovis. “I really got the fundamentals of building at an early age. I could install a window and frame a door before I graduated high school.”

His talents were on display in more than one room at home. Once the kitchen was done, Clovis convinced his parents to let him renovate their unfinished basement so he could use it as a bedroom.

“I could install a window and frame a door before I graduated high school.”

His pet project was no small task: he built from the ground up, including insulation, drywall and lighting. Clovis is modest about the job, even though it stood the test of time.

“Now it’s not the nicest bedroom in the world — you can kind of see the drywall tracks through the mud in the wall and it’s a little bit rickety, but it’s still standing,” he says. “I’m one of five children, and after I left that bedroom, every single one of my siblings went through it and it’s still there, so I guess that’s a testament to how well that first contractor taught me.”

When Clovis left his Toronto bedroom behind, he also temporarily put his renovation career on hold for football glory.

He played throughout university and was scooped up by the CFL after graduation. His time in the CFL with both the BC Lions and the Saskatchewan Roughriders was bright but short-lived — he was sidelined by an injury, first in 2005 and then again in 2007 — but in the interim he won himself a coveted Grey Cup ring. He completed the entire 2008 season before making the decision to retire.

When it was clear he wouldn’t be suiting up again, Clovis moved back to his T.O. home turf and purchased a house on the Danforth. He returned to building, sharpening his skills on his own renovation projects.

He moonlighted as a personal trainer, but his focus was on his home, and before long, it was attracting attention.

“It really became a showcase, and as people started to come over, they would ask, ‘Who did this kitchen? Where did this addition come from?’ ” says Clovis. “When they found out I was doing it, they were pretty amazed, first of all, but also I started getting jobs. Word of mouth just spread, and I’ve been doing kitchens and bathrooms and basements ever since.”

And so it was on a construction site that HGTV Canada found Clovis, happily working on one of his many contracts. He had not sought to capitalize on his sports career by moving into entertainment, but when the opportunity presented itself, he was up for it.

The show that the network proposed to him is unlike most reality renovation shows where a team of experts saunters in to make over a flawed space. Instead, Tackle My Reno features homeowners in the GTA who are stuck on DIY house projects. Clovis shows up to guide the family through the morass of studs and wires (and even clutter), and together, expert and rookie pull off minor reno miracles.

It’s a concept that sees Clovis work not only as a builder, but also as a teacher, motivational counsellor, and even couples’ therapist. Luckily, he was already familiar with the interpersonal component of his job.

“Whenever you’re going in to build somebody a house, you need to get a sense of who they are and what their personality is,” he explains. “I’m not into building a kitchen just to give them a kitchen. I really want to give them something that has a personal touch to it.”

Once Clovis settled into the improvisational flow of reality television, his natural ease with building translated easily to the small screen.

“What I’m really hoping to do with this show is to empower those guys who try so hard with their DIY jobs and make them feel proud at the end of the day that they contributed to building their home,” Clovis says. “When they tell the story about that particular renovation, they can say, ‘I remember when I did this and when I did that’ and it just makes the experience so rich for them.”