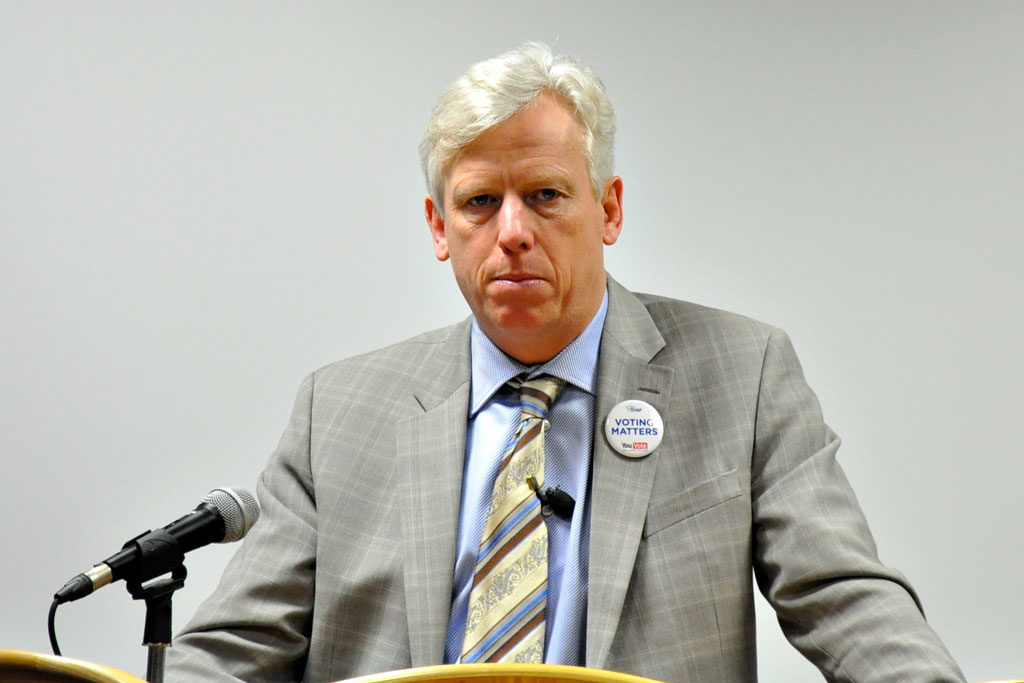 When word came down one week ago today that Premier Doug Ford was redrawing the ward boundaries across the city, dramatically cutting the size of Toronto city council three months into an election, David Miller took to social media to express his, shall we say, disapproval. The tweets got so lively, that some began to suggest he consider entering the race himself. Though that didn’t happen, Miller has continued to express his opinion that what Ford is doing is wrong both morally and legally. Post City sat down with the former mayor, who defeated John Tory back in 2003, to chat politics and ask if he really did think of running again.

You’ve been speaking out vigorously on this issue and I got the sense that you were considering running yourself. Did you?
This is like Groundhog Day for me. What Premier Ford has done has so many parallels to what Mike Harris did when he amalgamated the C​ity of Toronto against the wishes of its residents expressed overwhelmingly in a referendum.

For me, it’s like living through this terrible period of Toronto’s history when the rights of the people of Toronto to collectively make decisions about its future was taken away from them. And it’s being done again.

So, yes, when I was vigorously tweeting, when the rumours came out Thursday night, I did think somebody needed to step forward and the thought crossed my mind briefly.

Did Jennifer Keesmaat’s decision to run have anything to do with you deciding against it?
My decision was made independently of hers, but I did feel it was important that somebody run who is taking the position that we need to aggressively fight back against the province. Toronto has three million people, it is the fourth or fifth biggest government in the country depending on how you measure it. Its budget is bigger than that of most provinces. Its population is bigger than that of most provinces. And, continually being treated as a political football on a whim of the premier is just unacceptable, and it’s also not very smart. If you really want the city to succeed, you can’t govern it that way.

Were you surprised heading into this election, that there was nobody from the progressive group of councillors such as the ​Kristyn Wong-Tam, Gord Perks, Mike Layton, Joe Cressy group to challenge Mayor Tory? Or is it that tough to defeat an incumbent mayor heading into the second term?
In my view, it shouldn’t be around whether the incumbent is likely to get re-elected. I decided to run when Mayor Lastman still appeared to be running. It’s about whether the incumbent is moving the city forward in a way you believe in, and whether or not the city is going to succeed and whether your values and experience are uniquely positioned to offer something different.

But it’s a really tough position. If you’re, for example, Mike Layton, he has two very young children. Once people have been elected for a while they are looked at as capital P politicians. But they are actually local people just like you and me who have families and lives and deciding to run for office of mayor is daunting.

Must be a tough job.
It’s a fantastic position. It’s a privilege and an honour. It’s the best thing anyone could possibly have the opportunity to do. To help bring together the people in one of the world’s great cities in a way the ensures that it is going to be prosperous and successful in the future for everybody is a magnificent task and a privilege and every second of it is a privilege — even the campaign. It’s just a daunting decision to choose to do that.

What’s going through Jennifer Keesmaat’s head as she really gets into the campaign?
One of the things that people forget a little bit, is that all of the city’s mayors, except maybe two in the history of Toronto (certainly since 1900), have sat on city council. Two have not been on city council and one is John Tory. The very simple reason is that you need to understand the nuance of the issues and understand that city wide and that’s very important. Commenters in the tabloid press used to attack me for being from downtown. Of course, I virtually live in Etobicoke so I’m not, but secondly, I’d been involved as a councillor for 12 years before mayor. Nine essentially as a regional councillor, and I knew every part of the city and understood the issues so that stereotyping didn’t work.

Jennifer Keesmaat has some of that same strength, as a city planner she will understand the issues citywide from northeast Scarborough to northwest Etobicoke. I think what’s going through her mind right now, is: how do I clearly, simply and succinctly explain to people why I’m running for mayor? What her ideas are and why they should inspire people to support her.

Will being the person to take on Ford and defend Toronto resonate enough with voters?
There’s no question people are extremely upset by what Mr. Ford is doing, and want to see a Toronto response absolutely.

The city council voted to oppose what Ford is doing cutting the number of wards in half, but what happens next?
There are a bunch of things. First of all, there are legal grounds to oppose this. And there are different legal grounds for citizens whose rights are being infringed here, and for new candidates whose rights are being infringed. Candidates registered for the election on May 1 and have campaigned for three months and then were told the campaign is being abolished. There are rights of the city as well. All of their legal arguments are slightly different, and they are all important. The thrust of it, as I understand from reading the comments of professors of constitutional law (not from any research I’ve done), is that the Ontario government in these circumstances, where you are setting electoral districts, has a very real obligation to consult and that obligation at least arguably is going to override their ability to make legislation about the City of Toronto, as they clearly haven’t done it.

The other side of things, is that the City of Toronto went through a process of I think about a year and a half, with extensive civic involvement that included appeals to the Ontario Municipal Board to decide the current boundaries. That’s the kind of process that courts have pointed to in repeated cases as the right way to do it. So there is at least a possibility, I think a good possibility that the courts might rule the actions of the province are invalid and in that case the city’s strategy has to be a legal one and pursue very vigorously a legal challenge.

What can Torontonians do?
This is also a political issue. P​eople speaking up matters. People writing to their elected officials, to the ministers, matters. The Premier keeps saying people tell me they want this, well he needs to hear from the hundreds of thousands of Torontonians who clearly said according to polling that they don’t want it.

Is there enough time for a realigned election at this point?
You can’t properly and reasonably run an election under completely new boundaries on this short notice. It is completely absurd. I’m not going to give it any credit. Would an election happen?  Yes. Would it be demonstrably free and fair? Absolutely not.