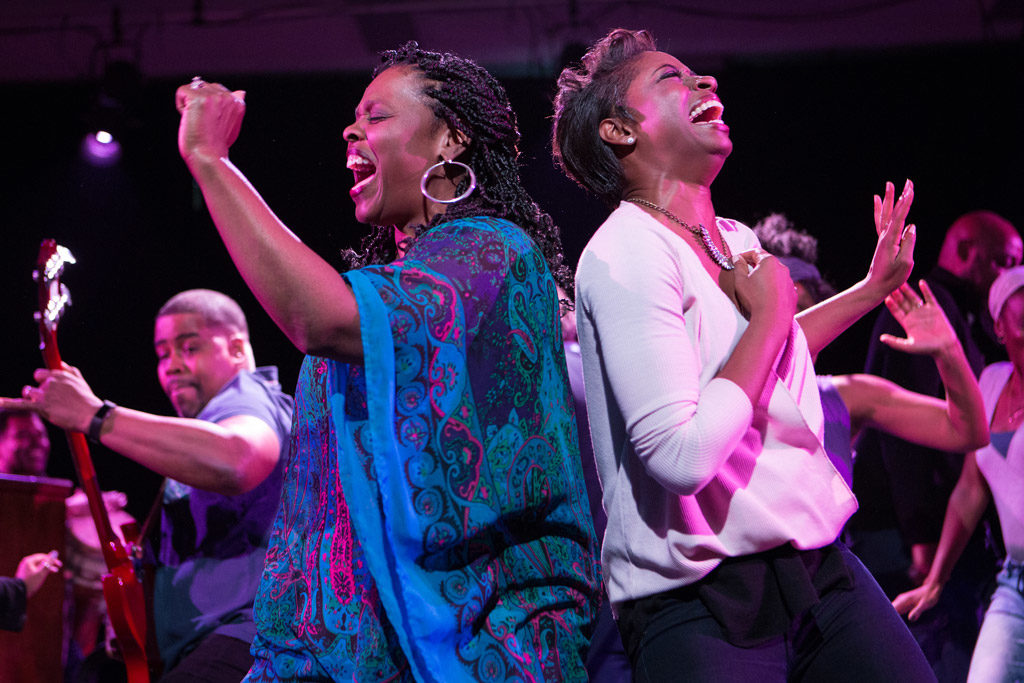 Rehearsals for the large-scale (in every way possible) new musical Sousatzka are well underway at the Elgin and Winter Garden Theatre ahead the first performances this weekend.

It’s a massive undertaking, with nearly as many designers, technicians and producers in the rehearsal space as there are cast members. But the first scene we watch is a small and intimate moment between Tony Award winners Victoria Clark (who plays the title character) and Judy Kay, which reveals some of Sousatzka’s mysterious past.

“My character, Themba, and his mother leave South Africa to escape apartheid and journey to London where the great Sousatzka gives music lessons. He’s a musical prodigy, but he also has PTSD from the death and destruction he witnessed: his father’s imprisoned; he had to leave everything behind. He can’t see what he might have in common with Madame Sousatzka, but we learn she escaped Warsaw during the Holocaust. So they develop this bond, especially through music, of empathy, for their shared refugee experiences.”

The production marks veteran theatrical impresario Garth Drabinsky’s first foray back into theatre. Sousatzka is based on an original novel, which was itself turned into a film. Drabinsky is not a fan.

“It didn’t work. I was involved in it, and it and the book had some of the same issues. [The book] is a rich source of imagery, which is the essence of great lyrics in musical theatre, so that aspect was important. But the powerful triangular relationship [between Themba, his mother and Sousatzka], is, as it was in Ragtime, the key to the story.

And neither the book nor the movie did much to help you understand the context for these people. Where did Sousatzka come from? You see it all in the show. That’s what we’ve created — that and the prodigy’s back story and that of his mother,” Drabinsky says.

For the principal actors, those deep back stories help contribute to their dreams of originating new, complex roles, which is rare in musical theatre.

Toronto’s Ryan Allen (“born and raised!”) plays Themba’s father Jabulani. He has had high-profile roles, including that of the general in The Book of Mormon on Broadway.

“That was a terrific experience, and I learned a lot, taking over for the original General, but it’ll be great to be back on a Toronto stage, originating something new,” he says. “For an actor, this is the dream: to create a role, to have some ownership of it.”

Barrow agrees. “Every actor has dream roles, sure, but my ultimate dream role is one I get to create. And this role … well, I don’t know of any black African-American lead roles under the age of 25 that are written for musical theatre."

Clark originated her Tony Award–winning turn in the hit musical A Light In the Piazza.

“I’ve done [the production] as an actor and director, and it’s such a pleasure and an honour. You find every day that things will shift and change. It’s a process you need to approach with playfulness and joy. You can’t feel entitled to anything, since it’s all about how it all fits together.

“But we have such a great creative team that it’s easy, even for a control freak like myself, to trust the process,” she says.

Despite the big names and potential egos, Allen’s been impressed at the smooth collaborative process.

“There’s so many people involved who are highly regarded in their professions — there’s a lot of cooks! But everyone’s respectful, and it feels like a very cohesive team.”

Part of that cohesiveness may have something to do with after-work bonding. Despite their long rehearsal hours, Allen and other Canadians in the cast have been eager to show the visiting Americans their city.

“I’m a sports nut, so we went to a Blue Jays game this summer, during the workshop process, and tonight, I’m taking some of the Americans to a Marlies game —we may go for poutine after,” he says.

To that end, the theme of the show is bringing lost people together.

“The characters are all refugees,” says Drabinsky. “When I started working on this project five years ago, I didn’t know yet how the world would devolve into the epic circumstances of today, with 65 million people displaced and in exile. And Canada, of course, has become a world leader in dealing with the refugee crisis.”

“In the U.S. right now, we’re wrapped up in a crazy political transition,” says Clark, “and a lot of misunderstandings and tension about race and immigration, which Canada seems to be much better about.”

When we ask Allen how he thinks the show will appeal to audiences in both Toronto and, eventually, New York City where it is slated to land on Broadway later this year, he’s quiet for a moment.

“I’ll be honest, I don’t know — but I’m really curious to find out,” he says. “One of the songs I sing is called ‘Rainbow Nation’ [what Desmond Tutu called the ideal of a post-apartheid South Africa], and who’s going to say that’s not a really great idea?”