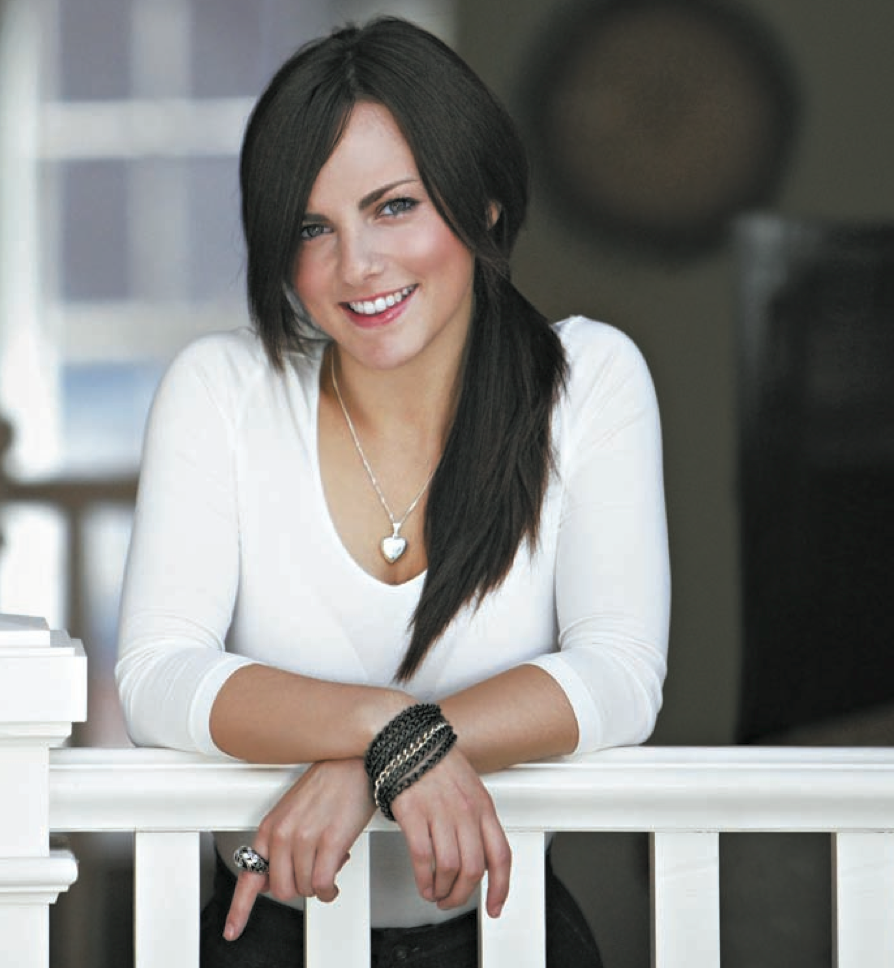 WHEN GEORGINA REILLY moved to Toronto at age 16 from her native Surrey, England, she left something behind.

“I know, it’s so weird!” the 23- year-old actress says with a laugh during a recent chat. “When I came [here], it just sort of went away. But if I’m home and around English friends, I have an English accent…. It’s all very confusing!”

Dubbed Canada’s “next big thing,” by a host of media outlets, including the celebrity star- making website du jour, She Does the City, she certainly has the charisma to follow in the footsteps of other breakout stars like Nova Scotia’s Ellen Page or Vancouver’s Seth Rogen, both of whom have seen their careers take off in the past two years. (Page’s Whip It will debut this month at the Toronto International Film Festival and Rogen’s Funny People opened in July).

It doesn’t take long after meeting Reilly — who has a wonderful sense of humour — to realize that there’s something behind the buzz.

One can’t help but notice that the actress appears poised for stardom. She finds herself at TIFF again this month, starring in Dev Khanna’s short film A Hindu’s Indictment of Heaven. In the film, shot on location in Guildwood Park in Scarborough, she plays a woman standing at the gates of heaven, who refuses to enter until her soul mate can join her.

“It’s kind of a dark comedy,” Reilly explains. “She says she’s going to wait outside the gates of heaven with Saint Peter, and then she finds out that her boyfriend actually found a new soul mate. It’s kind of funny. She’s, like, ‘I’ve been waiting here for 10 years for you!’”

Heaven comes on the heels of her leading role in Bruce McDonald’s Pontypool, which debuted at last year’s TIFF.

Reilly’s got plenty to look forward to, as well, with the lead in McDonald’s latest collaboration with Don McKellar, This Movie Is Broken, which intercuts a fictional story with local Toronto indie band Broken Social Scene’s summer Harbourfront concert.

Growing up in England’s idyllic countryside, the acting bug caught the fresh-faced brunette at an early age.

“I’m a sucker for musical theatre!” she gushes, citing Guys and Dolls and Thoroughly Modern Millie among her favourites. “It’s always great when there are good songs to sing,” she says.

Her first foray into television came in the form of an animated character on the popular BBC children’s series — Number Time. “I was 10 at the time and loved it. I would record songs in my PJs,” she says.

While a lot of Britons take trips to Paris, Rome or the Swiss Alps on vacation, Reilly recalls her family always came to Canada.

“When I was younger, we always went to Vancouver and Victoria because we have family here in Toronto,” she recalls fondly, adding, “I just remember loving the beaches there when I was little.”

While her parents’ decision to move to Toronto was based partly on her father’s career, she’s quick to point out that the whole family fell hard for the country as well.

Like a lot of women her age, shopping is among Reilly’s hobbies. She also loves to read and keep in shape by taking classes at the local gym.

“Do you know what else I love?” she asks. “Rainbow Cinemas. On toonie Tuesday you can go to the movies for, like, four dollars.”

And, being English, a love of Indian food is a definite must.

The Reillys always order takeout from the Indian Kitchen, a local restaurant. “The butter chicken is amazing there,” she says.

The family home — which Reilly describes as being different from her home in England, what with all the open spaces and modern design — sounds like the perfect environment for a budding actress to hone her craft.

Her father, a writer and composer, spends his time these days working on screenplays. Her mother concentrates on the production side of the industry. Her older brother is a DJ, among other things.

And of course, Reilly’s two “wiener dogs,” Bodie and Alfie, serve as great sounding boards when she is reading through scripts.

Reilly has decided to postpone university indefinitely and is instead focusing on acting classes and taking up smaller TV roles in lesser-known series like Beautiful People, Runaway and MTV’s upcoming Valemont. But She attended her final two years of high school at North Toronto private school Havergal College. “It was kind of like the movies for me,” she says of her experience, “with all the lunch tables and cliques and stuff. The school uniform was like a Britney Spears outfit!” Spoken like a true actress.

And now, reflecting on the just completed shoot for  This Movie Is Broken with McDonald, famed for such cult flicks as Highway 61 and The Tracey Fragments, she says the film was a great way to flex her acting muscles, performing under the hectic conditions of a live concert.

“It was just so confusing,” she says. “Bruce was dealing with like 20 red cams on the stage to shoot the show, and we were running around with Don and a handheld camera, and he would just shout at us, ‘Now do this!’ ‘Light your cigarette!’ It was just go, go, go, and it was really funny, because we would look at him, and he’d be, like, ‘No, don’t look at me!’ It was really interesting and just kept us on our toes.”

She plays Caroline in the film, a girl visiting Toronto on break from a study abroad program in Paris, who is conflicted over starting a romantic relationship with her long-time friend on the night of the concert.

“It’s just about this couple going to the concert and also intermixed with their confusion about each other and whether she’s going to leave or stay,” she says. “It kind of works beautifully with the music of Broken, just the feel of their stuff.”

She does admit that she doesn’t fancy watching herself onscreen.

“I know some people find it very beneficial for critiquing, but I find it very difficult. I end up looking at how my face moves instead of what I’m doing. You can’t always be constructive in your criticisms.”

Regardless of her process, the future looks bright for Georgina Reilly. With a few future projects in the works (How to Be Indie and Majority Rules), she is most certainly one to watch.

Wherever the future takes her, chances are she’ll always enjoy coming home for a trip to the Indian Kitchen for her favourite butter chicken.