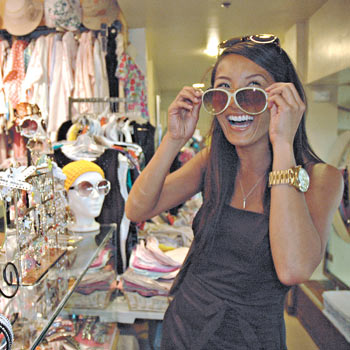 JUST WEST OF the heart of the Annex lies a little strip of Bloor Street known sometimes as Koreatown, sometimes as the Korean Business Area (or K.B.A.) and sometimes as Ktown, but to most, it’s simply called Little Korea.

The same young urbanites who shop the bohemian blocks to the east frequent K-town’s restaurants and businesses on the hunt for perpetually hip and authentically Asian offerings, from buckwheat noodles to animae-emblazoned fashions, and much of the Annex seems to run together. But make no mistake, K-town is unique.

My guide to the area is Tanya Kim, the Korean-Canadian cohost (along with Ben Mulroney) of the CTV entertainment show etalk. Born in Sault Ste. Marie, Ont., Kim came to Toronto and studied at Ryerson before moving on to a job at MuchMusic and, ultimately, the hosting gig. She also lived in the Annex for a time and was charmed by the ethnic strip.

“Growing up in Sault Ste. Marie, there wasn’t a big Korean community,” she tells me as we walk along. “Basically, there was my family. That’s it. It’s so unlike here where you have access to your culture full-time.”

As we head along, we pass small, corner groceries with produce stacked outside; gift shops; and small restaurants. “You should try these little corner joints,” says Kim. “Places that look suspect are sometimes really delicious.”

Food is foremost in Kim’s mind this morning, as she tells me that one of her favourite things about K-town is that it gives her access to authentic, Korean dishes that take little prep.

“You just throw stuff on the barbecue,” she says, adding quickly, “but, of course, it’s not as good as my mom’s. Put that in!” It’s early in the the day, so we forgo a BBQ stop and head instead to Hodo Kwaja (656 Bloor St. W.). The small bakery, also known as “Walnut Cake” serves (you guessed it) walnut cakes. Reminiscent of doughnut holes (think Timbits), these Korean pastries are stuffed with red bean paste. “They’re best when they’re fresh and hot,” says Kim, and we head in to buy some. Alas, it looks like we’ve missed much of morning prep, which is perhaps the most interesting thing about Hodo Kwaja. The shop features an open concept production area up front where patrons can watch the cakes being made (often between around 10 and 11 a.m.). A massive, iron machine presses the dough into shape and the assembly-line process is mesmerizing. The cakes are also inexpensive. Six go for about a dollar.

We move on to restaurants — Korea House (666 Bloor St. W.) and Il Bun Ji (668 Bloor St. W.). Kim stops between the two and is loathe to pick a favourite. “I can’t. I like them both. But I’m boring, I always order the same thing.” At both joints that thing is kimchi jjigae. She hunts the windows for a picture. (Photos are a staple at restaurants in the area.)

“You either love it or you hate it,” says Kim. “And I love it. Anything that is hot and spicy, I love. Kimchi, you know, is fermented cabbage, sort of like sauerkraut, and jjigae means, like, ‘stew’.” She hastens to reiterate that no one makes the dish better than her mother. Across the street we check out P.A.T. Central Market (675 Bloor St. W.), a large, white block of a building that resembles a Kinkos. Inside, it’s an Asian grocery paradise, with a focus on the prepared foods mentioned earlier. Row upon row of frozen dumplings, a staggering array of instant noodles and more condiments than you could imagine give way to marinated, refrigerated meats, tubs of fresh and preserved seafood and, of course, kimchi.

Kim focuses on a display of red-tinged tubs, which she holds up one by one. “I love this area! People are going to think I’m gross, but it’s so good. Spicy squid, fish eggs, and here’s the kimchi!” P.A.T. is something of a department store and above the main level is a mezzanine of booths selling clothing, jewellery and beauty products. Kim tries on funky shades and a bejewelled visor, amid buckets of mock Crocs, blingy earrings and sleepwear. “It’s one-stop shopping. You can get everything here — food, clothes, underwear,” she quips.

At the beauty counter, we chat with Joo Joo, a salesgirl who tells us that P.A.T. is a mini-chain with six Toronto locations and that they’ve been open for 16 years. Though we aren’t buying, Joo Joo insists we take free samples to go. “Korean products are really great,” says Kim. “I remember looking at my mom’s Korean fashion magazines, and they always had the newest and latest age-defying stuff.”

With food and fashion checked off, our last K-town stop is BMB Karaoke (593 Bloor St. W.), just one of the two popular crooning halls in the ’hood. (The other is XO Karaoke, 693 Bloor St. W.) Karaoke being more of a nighttime activity, the place is closed, but Kim likes the idea of their private rooms. “I like singing karaoke, but I don’t know if other people like me singing karaoke, if you know what I mean,” she says. Besides that, she notes a sign in the window: “Look! You can make your own record. It’s only $10.”