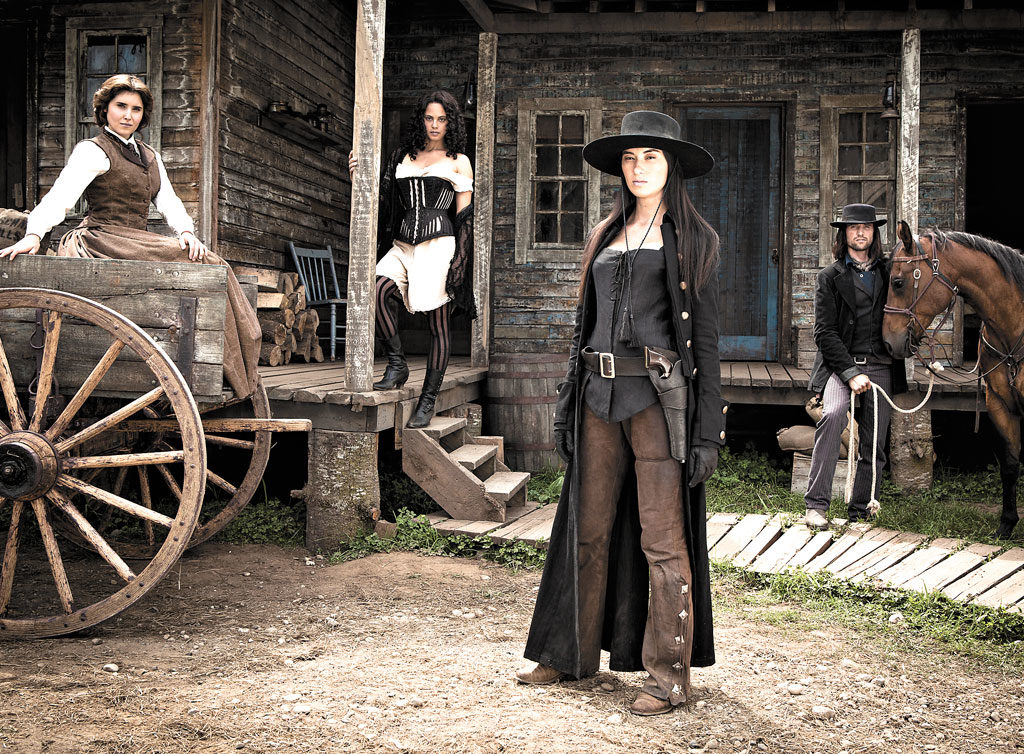 After years playing very strong women in very dramatic plays, when asked, Cara Gee says she is ready for a rom-com—but not before her new starring role in the new and decidedly different CBC series Strange Empire.

“Oh my God, I can’t wait,” she says, from her temporary digs in Vancouver where she is staying while shooting until the end of October. “Great question, hopefully soon. I’m really funny. Nobody knows … but man.”

Gee went straight into shooting Strange Empire after starring in her first feature film, Empire of Dirt, which premiered at TIFF in 2013, where she was also named one of the festival’s “Rising Stars.”

The show, styled as a gothic western, is about as far from traditional CBC fare as we’ve seen in recent memory, and that makes Gee very happy.

“I feel like I’ve had this conversation amongst my peers for a long time now,” she explains. “This is the golden age of television; it’s great to see CBC throw something daring into the mix. I am so lucky that I get to be the one to do it.”

Set in 1869, Strange Empire tells the story of Kat Loving, a Métis woman who moves west with her family to start a new life in Janestown on the Alberta-Montana border.

“Her life becomes a bit of a nightmare,” says Gee. “Everything goes awry, so far from what she planned. Every scene, every moment, she is asking herself, ‘How is this my life?’ ”

Although Gee is a wee bit tight-lipped regarding any significant plot points, we can assume by the old “sizzle reel” that her family is attacked, hubby and son killed and daughters sold into “whoring.” Gee trades herself for the freedom of her children and then all hell breaks loose.

“It’s a lawless country, and how do you survive that? It takes enormous strength to, you know, carve a life out,” she says. “My character is Métis, and man, the people who survived that had to be pretty f**kin’ tough you know, because lots didn’t.”

As an Aboriginal actress, Gee, an Ojibwa, readily admits that a western isn’t the first genre that she would gravitate toward given the sorry representation of her people, but she says Strange Empire is something very different.

“The characters are all so complex,” she says. “It’s more about looking at this time and place. It really existed and people were really there whose stories haven’t been told yet. We’ve never seen the Métis woman who survived, the woman who was fighting to become a doctor, the madam of the brothel who clawed her way to her position to free black people. They were all there and they are all really interesting.”

Gee was first introduced to acting at her Newmarket high school when she signed up for dramatic arts for an easy credit.

But I had this incredible drama teacher.… He took the work so seriously, definitely at a university level. In his class there was deeper analysis, great scripts, breaking them down and using our brains, so I was, like, OK. And he also encouraged me, made it feel that it was a very real possibility of making a career out of it. And I thought that, if I can make this my job, I could be the happiest person in the world. And I’m very lucky that it has worked out that way.”

Gee worked in theatre for years, starring in productions of The Rez Sisters, Stitch and the Dora Award–winning remount of Margaret Atwood’s The Penelopiad that played at Buddies in Bad Times in 2013.

Her lead role in Empire of Dirt, an intergenerational drama involving an Aboriginal family, garnered Gee a 2014 Canadian Screen Award nomination for Best Actress. So, despite her willingness to give comedy a try, the gritty stuff seems to be working pretty well.

“These are refreshing roles written for women that are substantial and complex,” she says. “I haven’t been on this side of the industry for very long and haven’t had to deal with the bullshit, playing idiots you know? I certainly don’t want to do that. These are whole, complex people. And I’m cool to keep doing that. Comedy would be fun though.”