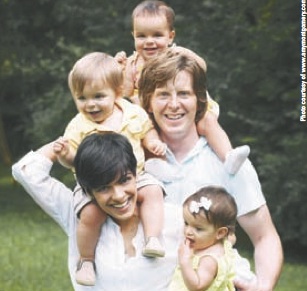 BY DAY, SHE’S a barely showered mom trying to create order from chaos with one-year-old triplets. By night, she’s the well-puttogether, incredibly intelligent coanchor of Global TV’s 6 p.m. newscast. Anne-Marie Mediwake has the uncanny ability to transition between her two worlds seamlessly. Naturally, I took full advantage of chatting with her to get some advice on balancing life and babies.

“My key to survival is being in the moment,” says Mediwake. “Driving down the highway at 2 p.m. on my way to work I’m all about the day’s headlines, meetings and what’s on the show today.”

As we chat, it’s clear we have a lot in common — both living in and out of the public eye while dealing with the stress resulting from wanting to have it all. I relate to her pragmatic personality and ability to focus on the task at hand.

It’s hard to imagine what it must have been like for Mediwake and her husband, Global reporter Darryl Konynenbelt, to hear the news she is carrying three embryos. While dealing with that shock, she’s then told to spend 10 weeks in hospital on bedrest to help her babies gestate. Not an easy task for anyone, especially someone as energetic as Mediwake. But, she took it in stride. “I’m all about setting goals,” she says. “All I thought was, ‘What is it going to take to keep them all healthy?’ I would have stood on my head for three months to keep them all in.”

What’s it like to be pregnant with triplets? “I gained 80 pounds, and it literally took me seven minutes just to roll over near the end!” she says laughing.

For most women, myself included, making the transition into motherhood is difficult to say the least. For Mediwake, who went from working woman to instant mother of three, the shift was surprisingly smooth — although not easy.

She’s quick to point out she couldn’t have gotten through the early days with triplets alone. In fact, the biggest piece of advice she has for new parents is: “Don’t be afraid to ask for help. In the small town I used to live in, neighbours and the church would help. In big cities like the GTA, we don’t get a lot of help.”

“My mom was awesome. I could not have done this without her. The difference between having two and three babies is that it’s almost physically impossible to take care of three babies by yourself.”

Not one to do things halfway, Mediwake tells me she breast-fed all three babies. “Basically you nurse non-stop all day with maybe a 15-minute break between shifts.”

After a few weeks of this new life caring for three newborn babies, Mediwake and her husband agreed they needed more help. They sold their car to pay for a night nurse and bought her sister’s 10-year-old rusty minivan for a dollar.

“It was the best decision we made,” she says. “I was worried about postpartum depression because the risk increases with the number of babies you birth. My mental health is worth the money for a night nurse. It’s the difference of enjoying the first year.”

After eight months of a yearlong maternity leave, Global called to ask Mediwake to return to work four months early. “I had to do a lot of snot and tears in our living room,” she says. “I felt I was putting a price tag on my kids’ heads. I felt horrible.”

That is, until her husband surprised her by suggesting he take a four-month paternity leave so she could go back to work guilt-free.

Being a busy mom has forced Mediwake to make some personal adjustments, the biggest of which is learning to let go. “I am such a perfectionist,” she says. “If my house didn’t look perfect, I wouldn’t let anyone come over. That stuff doesn’t matter now.”

When once she had fresh cut flowers and a perfectly manicured lawn, today her dining room set is gone, replaced with an inflatable ball park, a four-foot-high circus tent and collapsible tunnel.

She laughs. “I never wanted to be one of those people whose house was overrun by toys. I used to think, ‘That’s disgusting!’ Instead, we outdid all our friends.”