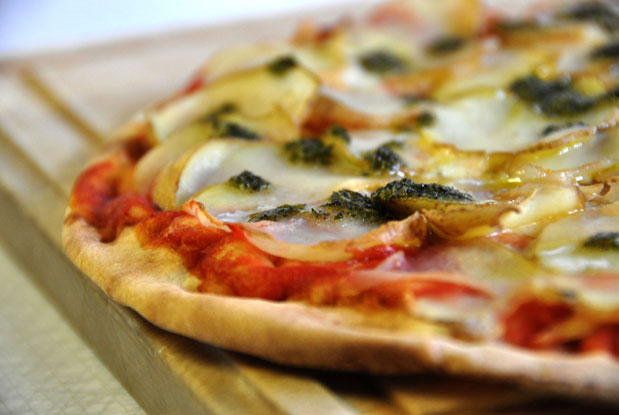 Searching for “pizza” on Canada411.ca in Toronto yields 41 pages of results, ranging from gourmet Neapolitan pies to 3-for-1 cheap-and-cheerful people pleasers. Every day is a hard-fought battle, as large corporations square off against mom and pops for a place at your dinner table or to put a slice in your hand.

Pizza offerings basically break down into three categories: quick-service chains like Pizza Pizza and Domino’s, independent shops and gourmet pizzerias, and frozen “just like delivery” pies from grocery store aisles. The economic underpinning of all three is cheese, which accounts for up to 50% of every pizza sold.

The recent motion by the federal government to stop U.S. pizza cheese from flowing across the Canadian border without paying a tax of about 245%, coupled with the Canadian Dairy Commission’s decision to raise the cost of key butter and milk products by 1%, has many in the pizza business wringing their aprons over 2014 budget prospects.

However, the higher-end pizza shops that buy cheese from local dairies may be the exception to the rule if their pizza becomes more price-competitive.

“The quick-service chains are going to have to raise their prices, which would get them closer to our price point. Then it’s a no-brainer for people to eat our pizza,” said Gary Quinto of Pizzeria Libretto. His locations on Ossington Avenue and Danforth Avenue are already paying top dollar for ingredients from local farms, butchers, and cheese mongers.

The now closed loophole at the border allowed so-called “pizza kits” – consisting of shredded mozzarella and sliced pepperoni – to be classified as prepared foodstuffs, and therefore not subject to the tariff on imported cheese. Many of Toronto’s gourmet pizza shops would likely scoff at the thought of serving pizza from these kits.

“What we do and what they do is very different,” said Quinto, whose pizza recipe is governed by a group in Naples, Italy.

But the head of the organization representing most Canadian pizza-makers feels differently.

“The government is pitting one group against another,” said Garth Whyte, head of the Canadian Restaurant and Foodservices Association. “They’re doing everything possible to keep our prices high for all our pizza makers. Our members are being hurt. They are being hurt by the increased prices. They are being hurt by frozen pizza prices that are 30% less because they are not influenced by the high supply management prices.”

The supply management system that protects the price of domestic milk, cheese and butter dates back to the World War Two era.

“This is a system that benefits something like 0.01% of the population and penalizes 99.9% of it. It’s essentially a tax that all Canadian consumers have to pay in order to buy the peace or buy the vote of influential dairy producers in rural areas, especially in Quebec,” said Pierre Desrochers, a University of Toronto professor specializing in food policy and economic development, and a former Canada Customs Border Services Agency officer.

Far away from Parliament Hill, however, the upper-crust players in Toronto’s pizza market are working up an appetite for more traffic as a result of their buy-local business model. They are hoping 2014 will be the year that Torontonians support the local slice.

“This actually may work in our favour. If the big chains [had been] taking advantage of the shredded mozzarella, I would say yes, we would probably be in a much better situation if they had to raise their prices,” said Mario Mazzotta, a manager at Abruzzo Pizza in Richmond Hill. His shop has been buying local for over 30 years.