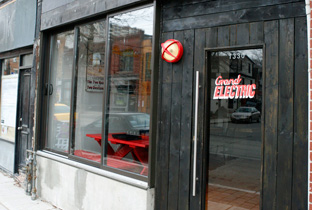 Looks like that Parkdale moratorium isn’t only affecting new businesses. When Grand Electric started expanding into the second floor of its building last year, the last thing anyone expected was for the plans to come to a crashing halt. Now, thanks to the moratorium, the 40-seat expansion has been suspended.

“As far as I know, we did everything right,” says co-owner Ian McGrenaghan. Permits were dealt with ahead of the bylaw, he says, and construction was pretty much completed on the upstairs space. “The next thing we know, ‘Sorry…’”

Feeling blindsided, the kids at Grand Electric may decide to fight the suspension, which would, of course, require dealing with lawyers and legal bureaucracy. If the suspension isn’t fought, it will likely last until the moratorium is lifted.

“Right now we’re exploring our options,” McGrenaghan says, “and focusing on getting the wait times down.”

Fortunately, Grand Electric will soon be offering lunch service seven days a week. The first weekday lunch will begin this Thursday, running 11:30 a.m. to 4 p.m., with dinner starting at 5:30 p.m.

And what about rumours that the Grand Electric team is working on a new location?

“I don’t know anything about that,” McGrenaghan says.