Graydon James and The Young Novelists bring their raucous folk-rock to The Cameron House - TRNTO.com
Skip to content 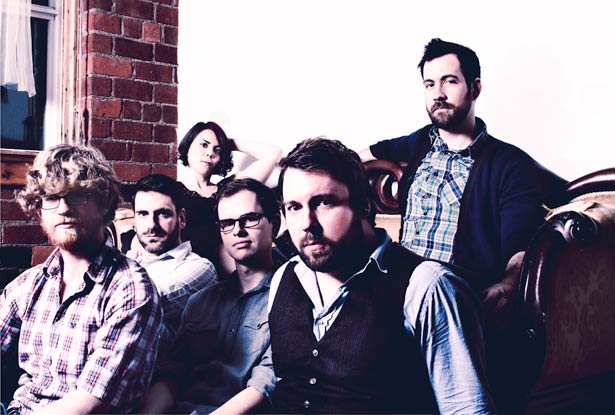 Folk music has made a glorious comeback — and Toronto is blazing the trail. With bands such as Great Lake Swimmers and Cuff the Duke getting mainstream air time, local indie groups have to work overtime to give us something refreshingly unrivaled, and at the same time, something wonted. Which is exactly what Graydon James and The Young Novelists gave us last night — and will continue to do every Wednesday night this month.

Postman by day, cavalier crooner by night, frontman Graydon James delivered (get it?) an intimate set at The Cameron House on Wednesday. Backed by the full Young Novelists band, most of us in attendance felt as though we were seeing an old familiar friend that just happens to have killer jam skills. But the show was far from habitual.

Another local (Hamilton counts, right?) songstress, Paula Perri, warmed up the crowd and cajoled us with her honeyed, lulling voice, which was punctuated by blustering drum beats and smoothed by the fluidity of keys.

When it came time for the The Young Novelists to take the stage, it was immediately clear that they would keep true to the folk resurgence, and they performed in full-blown symphonic form. That included four-piece vocals, a trumpet, double keys (of both the old-school and electronic variety) and a tambourine, amongst traditional drums and guitars. So it’s no surprise that their brand of raucous bluegrass has likened them to other folk heavyweights such as Blue Rodeo and Wilco.

Instantly, the band jumped into its first full-length record, In The Year You Were Born, which was released in September (and seemingly an eternity after their critically-lauded EP, A Small Town Eulogy). Hands down, “It Takes All Kinds” remains the fan favourite, so kicking off the set with such a warming and winsome tune had us eating out of the palms of their hands for the remainder of the night. A veritable country-fried cacophony.

The cowboy-boot-mobiles dangling from the ceiling, plush couches and romantic lighting make for an undeniably cozy venue with serious acoustic abilities — but it’s obvious that the Young Novelists need a bigger space to hold their sound. Even now, my tinny iPod headphones aren’t powerful enough to handle the loudness of the studio album, let alone the live set, the latter of which you can (and probably should) experience.