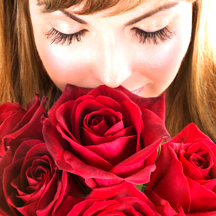 Whether you’re hoping to profess your undying love or simply show your affection this Valentine’s Day, the red rose is one of the most popular ways to do it. As the holiday of Cupid nears, we called up a high-end florist and a moderately-priced florist to see how their long-stemmed roses measured up.

If you’re looking to splurge on your sweetheart, you can treat him or her to a dozen long-stemmed red roses from Demarco-Perpich, located at 1044 Queen St. West. Ranging in price from $145 to $165, you’re paying for presentation and the quality of the flowers. Check the flower heads and the stem size to see the difference in quality.

Roses are paired with apple-green coloured viburnums and complimented by dark, glossy, green foliage instead of clichéd accents, such as baby’s breath and fern. Wrapped in bio-degradable cellophane and natural-coloured tissue, the arrangements are tied with twine. Prices include a creamy white, embossed card on which Demarco-Perpich will print a personalized message.

The high-end florist also sells spring-cut flowers, offering an alternative to the traditional red rose. These flowers include the pianese and the tulip, with nice arrangements starting at $75. Call 416-967-0893 for more information.

For a less pricey option, try BURST Flowers & Jewelry on 198 Walnut Ave, where a dozen long-stemmed red roses sell for $49.95. Roses are paired with a stiff green leaf called salal and a sprig of mini orchids. Similarly to Demarco-Perpich, BURST’s bouquets are wrapped in bio-degradable cellophane and natural-coloured tissue but with the added garnish of a green orchid on the front.

For a less conventional pick, try Memories of Summer, one of three floral arrangements BURST has designed specifically for Valentine’s Day. At $29.95, the vibrant display of flowers, which includes boxing and gift-wrapping, is quite the bargain. All wrapping is earth-toned, the box made from unbleached cardboard and the tissue, natural. Call 647-436-8565 for more information.

The biggest difference between the rose arrangements done by these two florists appears to be the viburnums included in Demarco-Perpich’s arrangements, making for a full bouquet. Accents are also rather different, when comparing the high-end florist’s use of deep green foliage to BURST’s use of a leaf and sprig. Packaging is quite similar, using environmentally-friendly wrapping materials in the same colour palette.

Both source their roses from Ecuador.