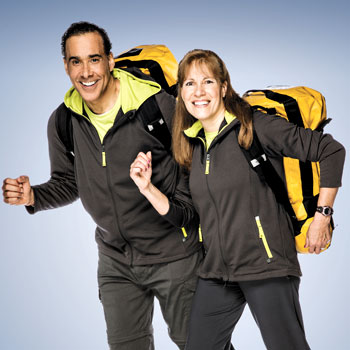 Hal Johnson and Joanne McLeod are Canadian icons whose faces are familiar to anyone who has had a TV set over the past 25 years. Their Body Break interstitials have played across the country, offering Canadians their unique tips for a healthy lifestyle that include exercise, good nutrition and staying active.

And, last month they took their way of life and their motto of “keep fit and have fun” to a new level as contestants on the premier edition of CTV’s The Amazing Race Canada.

“It was an amazing, phenomenal experience,” says Johnson, who grew up in North York. “It was really about pushing yourself that little bit extra and never giving up.”

Johnson says he and McLeod have been huge fans of the American version of The Amazing Race and have watched almost every episode of the show over the past 20 seasons. When auditions were announced in Canada, he says they both instantly jumped at the opportunity to try out. They add that their reasons for competing in the race were more personal than people might realize.

“We have a 14-year-old daughter together,” explains McLeod. “We really wanted to inspire her by doing this and to show her that we could still kick butt in our 50s.”

The two say they have always tried to influence their daughter to live an active lifestyle and now enjoy going back to North York to watch her play hockey, on the North York Storm hockey team at York University.

Johnson and McLeod have been business partners for 25 years now and have built a brand for themselves that includes the Body Break TV spots, exercise videos, equipment endorsements and speaking engagements. The two former competitive athletes, Johnson an all-star baseball player on Team Canada and McLeod a track and field star also representing the country, met at a gym in Toronto in the ’80s and quickly hit it off. Their marriage came after they started spending all their time together working on a show for television that would promote the healthy lifestyle they both believed in.

With very little production experience, Johnson and McLeod surrounded themselves with pros in the industry and set out to write, shoot and produce short TV spots around the simple concept of offering Canadians quick and accessible tips to improve their lives for the better through common tasks like gardening, pursuing a sport or creating a balanced diet. The spots, though, almost never made it to the air.

“Broadcasters wouldn’t run it because there I was, a black man on the air with a white woman, “ says Johnson. “They thought people would be put off by that in those days.”

“It was amazing to us just how warmly accepted we were by Canadians. ”

That reaction could have ended the business in its very early tracks, but instead Johnson approached a government-funded agency, ParticipAction, as a partner for the project, thinking it was something they could get behind, and his instincts proved to be right on. The partnership grew and the spots were soon on the very stations that had rejected them before.

For Johnson and McLeod the experience was an eye-opening one.

“It was amazing to us just how warmly accepted we were by Canadians,” says Johnson, adding, “99 per cent of people were so positive of the race issue that it actually influenced us in making the show, too, and knowing we were on the right track.”

McLeod also points out the spots were inclusive in another very important way. “Here we were presenting men and women as equals in an athletic setting, which wasn’t the way it was done back then,” she says. “I wasn’t in a flimsy leotard outfit just standing next to Hal. I was right there doing everything he was doing at the same level.”

And, the two have continued to work and live together as equal partners. They say it’s the years of working together that has brought an unspoken language to their relationship that they think gave them an upper hand on The Amazing Race.

“We didn’t have to coach each other to do anything because we’re already so in sync from years of competing and doing things together,” says McLeod.

Johnson adds, “We could anticipate the other person’s moves, so we saved a lot of energy on that front and worked in unison really well like we always have.”

The Amazing Race Canada, which premiered on July 15, took nine teams of contestants across the country in a series of challenges that would be physically demanding on anyone, and Johnson and McLeod, being on the older range of participants, were not naive about that fact. Before the competition began they trained in Toronto together, but they were both surprised by how ready they already were.

“There were moments where we really had to dig deep, but I was surprised it wasn’t more physically challenging. We were really able to keep up really well,” says McLeod.

The couple credit their physical readiness to their continued active lifestyle off-camera. Johnson still plays hockey, sometimes at the Herbert H. Carnegie Centennial Centre in his old North York neighbourhood where he first learned to skate, and they both enjoy a variety of indoor and outdoor sports.

And, now with this most recent goal marked off of their to-do list, Johnson and McLeod are excitedly looking forward to the next chapter in their careers. They’ve recently launched their Body Break website, complete with nutrition and exercise tips and a regularly updated blog and video blog, and they hope to use the site as a vehicle to take their brand in an edgier direction by commenting on things they feel strongly about like sugar products being marketed directly to kids and manufacturers misleading consumers about the nutritional makeup of their products.

The move will be a departure for the duo, who have mostly had a non-controversial approach to their healthy living tips, but it’s one they feel is worth the risk.

“We’re at a point now where people know who we are, many of them have grown up with us through the years,” says Johnson. “And, now we can really go after some of the things we feel are contributing to the issues that really concern us like childhood obesity and diabetes, among others.”

One thing’s for sure, though: These Canadian competitors are nowhere close to showing signs of slowing down any time soon.