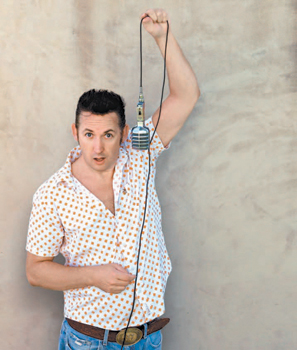 IT’S NO EASY feat to get a serious quote out of Toronto-born funnyman Harland Williams. Just try asking the Midtown native what his favourite thing is about growing up in the city.

“I spent many of my days spearfishing in the Don River with a dandelion remover,” he says during our chat at Toronto’s Diesel Playhouse. But he never ate what he caught … right? “No. No. Nobody eats Don River fish. You might as well have a nuclear cheeseburger.”

A tad quirky? That’s Williams for you. The 45-year-old’s streamof- consciousness rants have become his trademark, and his stand-up routine is full of stories about everyday occurrences, which inevitably get turned on their head.

He jumps from Mickey Mouse to whales to America’s Next Top Model all within 20 minutes. Even if you can’t quite wrap your head around what the heck he’s talking about, it’s a sure bet you’ll be kept in stitches.

In fact, you might have enjoyed this comedy king in his most recent release, My Life in Ruins, alongside Richard Dreyfuss (Jaws), fellow Canadian Nia Vardalos (My Big Fat Greek Wedding) and Saturday Night Live veteran Rachel Dratch.

A romantic comedy set among the ruins of ancient Greece, it was the first movie ever allowed to shoot in the historic Greek Parthenon.

The film, which was released in June, centres on a travel guide (Vardalos) who rediscovers her mojo as she leads tourists around Greece.

Williams describes his character as “an over-the-top American tourist who never shuts up,” a role he has surely injected with some mojo of his own. What was it like working with the legendary Dreyfuss? “Oh my god, it was just fantastic!” says Williams.

Although these days he’s based in L.A., Williams calls Toronto home. The comedian-actor grew up on a little Midtown crescent. As irreverent as Williams is, he comes from a family pedigree that is anything but. Williams’ father, John Reeser Williams, was a member of provincial parliament who briefly served as Ontario’s solicitor general.

While the junior Williams certainly has the charisma to be a politician, it seems evident that comedy was his natural calling. When I ask him a second time what else he loves about our city, he responds, with a straight face: “Probably the blueberry picking.” It’s difficult to tell whether or not he’s joking.

Williams isn’t the only entertainer in the family. His cousin is Kevin Hearn, the keyboard player for Canadian rock band the Barenaked Ladies. Hearn grew up not far from Williams and his five siblings. Actually, “four sisters and one werewolf” he jibes, “but we don’t talk about him.”

Williams appeared in the band’s video Falling for the First Time, and the two even released their very own tongue-in-cheek CD, fittingly entitled The Cousins, the Love Song Years.

“He does all the instruments, and I do all the singing,” Williams says. “It’s our little rock ’n’ roll project.”

Williams’ brother, Steve “Spaz” Williams, chose the bright lights of show business as well. A director, his most recent project was Disney’s The Wild.

“I’m a little bitter toward him because he got a really welldefined chin, and I got no chin,” says Williams of Spaz’s physical attributes. “That was a bit of a drag.”

Har, as he is fondly called, loves discussing his high school days. “I was more of the class sniper,” he says when asked if he was the class clown. “I would wait for the class clown to jump out, and as soon as he did, I would try to trump him, hit him back with a joke that was better than his.”

While working toward a degree from Sheridan College in animation, Williams had a brief foray working as a forest ranger in Fort Francis, Ontario, giving him the chance to “plant a few trees” and “get charged by a moose,” he recalls. “I did it during the spring and summer, to make ends meet, and loved it up there.”

After school, the next seven years were spent honing his stand-up act in Canada before planting himself in L.A. “Once I felt ready and I was confident, I said, ‘It’s time to make the move,’ and I did.” Success followed.

Williams made his big-screen debut alongside fellow Canadian Jim Carrey in Dumb and Dumber in the early ’90s. He has since had a lucrative acting career, appearing in The Whole Nine Yards, There’s Something About Mary (seven-minute abs!) and the stoner comedy Half Baked, filmed here in Toronto. He is currently taking up the directing chair, directing Wing Man, a comedy about the lengths men will go to to hook women.

Despite his success on the big screen, stand-up and sketch comedy are still close to Williams’ heart.

He continues to appear in live stand-up acts and plans on releasing a live DVD in October called Child Wild, which features a taping of one-night-only standup, along with brand new wacky sketches.

He just may be the hardest working Canadian in Hollywood. The man wears so many hats it’s difficult to keep count. In addition to playing actor, director, comedian and musician, he’s a regular radio personality and a favourite of late-night host Conan O’Brien’s. Just last year, he served as judge on ABC’s reality show Wanna Bet?

The show featured celebrities making wagers on various stunts, tricks and challenges performed by average Americans — the perfect venue for Williams to show off his comedic prowess. Adding one more notch to the post, he is also the mastermind behind a series of children’s books (which he wrote and illustrated) about a dinosaur called Lickety Split.

“I just sat down one day, and I thought, ‘I love dinosaurs and I want to write a little story.’ It’s a cute catchy name, and I remembered seeing a movie called Jericho Mile with Peter Straub way back in the ’70s,” says Williams of where he got his inspiration.

“It was a jail movie, and the inmates gave him the name Lickety Split because he was a runner. When I started writing my kids’ story, it jumped out.”

How does he feel about his jack-of-all-trades status? “I love it all. I’m like a master medium maniac.… I love to jump in and at least try it. I don’t know if I’m good at it, but I like to taste the buffet.”

One can’t help but inquire about his personal life. After all, at 45, Williams makes no secret of his affection for kids. Is there a family in the future?

“I love kids” he says, flashing a mischievous smile, “I’m looking for a breeder.” He looks my way again and leans in: “Helllllloooo, magical interview that turned into a family … Helllllloooo.…” He does admit to being single at the moment. “I gotta find a good person,” he says.

“I would love it if it was a Canadian girl, but if you find someone with a good, kind heart, it doesn’t matter who they are. So hopefully it’ll come my way one of these days.… We’ll see.”

Certainly the funniest character to have come out of Midtown in recent history, Williams’ star is continuing to rise.