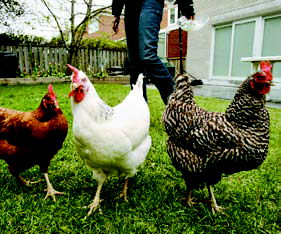 INSPIRED BY THE local food movement, a growing number of urbanites have adopted smallscale chicken farming. In a time when everything from luncheon meat to bean sprouts are being recalled, producing one’s own food just seems safer, say advocates.

“We have a basic right to be able to control our own food,” says one hen owner in the Forest Hill neighbourhood, who asked to be called Toronto Chicken since keeping poultry is illegal in Toronto. “Once I had kids, I started thinking, ‘What am I putting into them?’ You see what’s coming out of factory farms, and it’s all bottom line oriented.”

In March, Vancouver’s city council responded to the henownership trend by approving a plan to allow city dwellers to keep chickens in their backyards. The birds are also permitted in Niagara Falls, Brampton, Los Angeles and New York City, along with dozens of other North American cities.

If local campaigners have their way, Toronto’s bylaw will be similarly amended. Since the 1980s, it’s been illegal to keep most farm animals inside city limits.

Coun. Joe Mihevc has been instrumental in drawing attention to this issue. At his urging, Toronto’s medical officer of health has begun researching it. “More and more people have chickens,” he says, “And they are not having problems in Vancouver, either from a nuisance or a feces point of view. We’re watching that very carefully.”

“We’d want it to be a limited amount, between three and five [hens], and no roosters for obvious reasons. Even maybe some kind of licensing system just so we know where they are.”

“ You see what’s coming out of factory farms, and it’s all bottom line oriented.”

There are numerous reasons people want the bylaw changed. Hen owners report that eggs from their birds are healthier, with higher levels of vitamin E, beta carotene and omega-3 fatty acids.

Great taste is another draw. “They taste incredible,” says Toronto Chicken, who also grows her own vegetables and herbs. “There was a brief period when we didn’t get any eggs from our chickens, so we bought some. I made eggs for the kids and they said, ‘Ewww.’ There’s no flavour to them.”

Still, there are as many detractors as supporters. The Toronto Humane Society (THS), for example, endorses the current bylaw.

“Right now, the city bans agricultural animals. We think that’s a good idea. People don’t have the expertise and knowledge to maintain them,” says Ian McConachie, THS spokesperson. It can be difficult to keep them safe from neighbourhood animals, such as cats and dogs, he explains.

Another issue is that most residents don’t have enough room in their backyards for their chickens to roam, adds McConachie.

The stigma of bird flu, and the possibility of noise and odour complaints, also have more than a few people on high alert. However, Grain, an international sustainable agriculture group, has concluded that: “Backyard, or free-range, poultry are not fuelling the current wave of bird flu outbreaks stalking large parts of the world.” In fact, large-scale poultry farms account for most of problem.

As for noise, Toronto Chicken insists that her neighbours have never complained — in fact they quite like her hens. Smell is also not a concern. “One chicken produces one pound of waste per week. That’s what a dog produces in a day,” she says. “Not only that, but bird droppings are rich in nitrogen and great for the compost.”

According to her, by capping the number of birds that urban dwellers may own, the smell issue will never become overwhelming. “If people visited even one factory farm, they’d see that backyard farming is so much better,” she adds. “Chickens in farms are so cramped and stressed. What we’re doing is humane.”