He loves the nightlife: A gossip’s guide | TRNTO.com
Skip to content 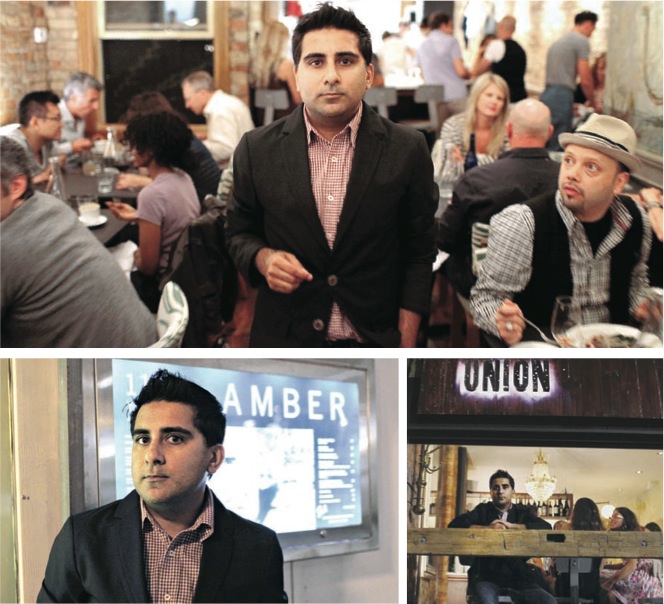 NATIONAL POST GOSSIP columnist Shinan Govani may well be the hippest guy in the city, but don’t call him a hipster.

“I’ve been called worse, I guess,” he says, “but there’s a stigma associated with it. Hipster has become a dirty word. There’s a sheep connotation with it. But that’s part of living in society, I guess. Being part of a herd.”

Govani certainly makes it his business to know where the herds congregate. “By the very nature of my job, I’m going out every night of the week to parties and events,” he says. “I could stop right now and beat most people’s life records for nights out.”

As a result, Govani is the person to ask about all things cool (or is it hot?) in the city, and he’s agreed to tell us about his ten favourite places and give us a mini-tour of a few. We thought of calling it Shinan’s Guide to Hipsterville, but he balked at the idea. “I wouldn’t say that,” he says. “I might call myself a social arbiter. It’s my job to know where the tribes congregate. And that varies.”

With that, we’re off. Diverse as Govani’s picks may be, they do have one thing in common: they all embody that elusive thing, hipness.

Our first stop is Yorkville’s Amber (119 Yorkville Ave.) Known for it’s seamless fusion style, this exclusive venue is one part club, one part high-end eatery and one part patio. It features everything from tasting menus to bottle service to DJ-spun dance beats. The clientele is typical of the Yorkville scene, and Amber is frequented both by the monied and the beautiful. And, of course, by celebrities who are both. Having a lot of ground to cover, we don’t linger. Besides, being with Govani means constant stops to chat, which takes time.

“Being in Yorkville is like being in the eye of the storm,” he explains as he is recognized again and again and frequently stops to chat and plug his new book — Bold Face Names — part novel, part roman à clef, just released by HarperCollins. It’s a text that just happens to mention a number of the places included on our tour, though not always by name.

Amber, for example, “is not called Amber in the book,” he says. In many instances, names have been veiled or changed. (Perhaps to protect the innocent.)

When your business is gossip, that’s to be expected, and part of the fun in reading the book is figuring out the who’s who. We escape the storm that is Yorkville and pop southwest to the second stop on our mini-tour: Trattoria Giancarlo in Little Italy (41 Clinton St.).

“It’s been around for a while, but it’s just had a bit of a makeover, and they’ve added a bar,” explains Govani as we walk in. Initially, the joint appears quiet, but Govani is soon recognized and welcomed by the bartender, Nathan, just one member of the family working for this family-run business. Nathan shows us that the underpopulated bar is misleading. Just inside, Giancarlo’s dining room is bustling, and the side patio is packed. Diners on this Tuesday evening include couple Joe Mimran and Kim Newport-Mimran (of Joe Fresh and Pink Tartan); Heather Reisman, CEO of Indigo Books; and even Hollywood star Harry Connick Jr., in town for TIFF and dining in one of Giancarlo’s private rooms. “For a lot of celebrities and CEO types, when they come to Little Italy, this is where they come,” Govani explains. It’s clearly not a see and be seen sort of place so much as an authentic A-list haunt. Govani attributes the restaurant’s popularity to a great atmosphere and quality Italian cuisine. As we leave (after a long bit of mingling, meeting and greeting), he seems pleased. “Everybody was here tonight,” he says. “I knew everybody at every table.”

Our third stop on the hipster mini-tour is further west still, at Union (72 Ossington Ave.) It’s a chic, industrial-country bar/restaurant with a Parisian flavour, and though it’s only newly opened, like the up- and-coming street it’s located on, it’s already generating a lot of buzz. Again, the place is packed, and Govani knows the handsome bartender.

“Union has an open kitchen, plus a good-looking chef. It’s a great combination,” says Govani. Indeed, a peek toward the kitchen does reveal striking chef Teo Paul, known for previously working under Michael Stadtländer and developing his skills abroad. Indeed, Govani says Union is an homage to a restaurant in Paris, which explains a lot about its atmosphere.

“I don’t really like big places,” Govani explains. He says he prefers cozy hangouts and places with a bistro flavour. “I like a bar, and I like to eat at the bar,” he says. “The service is usually faster, too.”

We linger at Union while Govani chats with people he knows and people he doesn’t and is equally charming to all. He seems authentically interested in everything, so I can’t help but inquire about how he manages to separate the truly cool from mere imitators. He says the criteria is simple.

“People who are self-possessed and self-aware are usually cool,” he says. “People who have relationships and friendships that cross generations are cool. People who don’t stick to one tribe. People who are both interested and interesting. They’re cool.”