Here's a list of some of the best new restaurants that opened in Toronto in 2021 - TRNTO.com
Skip to content 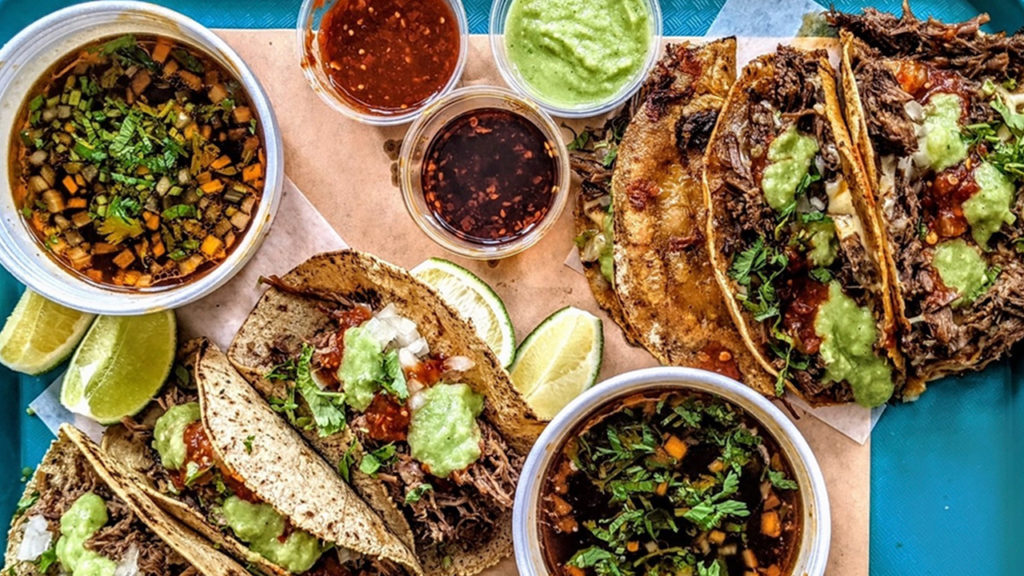 Toronto is home to some incredible restaurants.

We’ve rounded up a few of the best new spots in the city that have recently opened.

Whether you’ve already visited a few of these, or have been eagerly awaiting a meal, don’t miss our top picks for some end-of-summer patio dining and beyond!

Former Quetzal chefs Julio Guajardo and Kate Chomyshyn have partnered with celebrity chef Matty Matheson to open Fonda Balam. Fonda Balam replaces pop-up Birria Balam on Spadina Ave. The Mexican eatery is inspired by the cooking techniques and style of Mexico. The tacos here are birria-style, which is a dish originating from the Mexican state of Jalisco. They can be ordered crispy or soft and are served with red and green salsas.
802 Dundas St. W.

Top taqueria Gus Tacos has landed in Parkdale, with the opening of a third Toronto outpost. The best part about this Mexican spot? All of the tacos on the menu are just $5! Served in a handmade corn tortilla with onions and cilantro, protein options include grilled steak, braised lamb, chicken, grilled pork, braised pork and fish. A mushroom taco and a cheese taco with avocado are the two available vegetarian options.
1533 Queen St. W

Joybird Fried Chicken is back at STACKT MRKT. Run by Trevor Lui, JoyBird is located inside Belgian Moon Brewery and features an impressive 200-seat licensed patio. Along with their OG Taiwanese fried chicken sandwiches, this spot’s got a menu that includes street-style eats like fully-loaded smash burgers, as well as an assortment  of fried snacks.
28 Bathurst St.

When the pandemic brought their brick-and-mortar restaurant plans to a halt, chefs David Schwartz, Braden Chong and Keith Siu channelled their creativity into the pop-up concept Sunny’s Chinese. The menu is only available by signing up for their weekly newsletter, as dishes rotate that frequently. All of the dishes are elevated approaches to Chinese regional specialties. No fixed address.

Celebrity chef David Rocco is unveiling his latest project in the Yorkville neighbourhood. Although a full menu has not yet been released, Bar Aperitivo will focus on its namesake Italian tradition. Derived from the Latin “aperire” (to open), an aperitivo is a drink designed to open the stomach, or stimulate the appetite, before a meal.
95 Cumberland St.

Chris White and Jonathan Nicolaou (Brothers Food & Wine) have opened Restaurant 20 Victoria, one of the finest restaurants in the country. Expect the menu to build upon the style of cooking that Brothers was known for, which means a focus on seasonal ingredients and simple yet nuanced flavours (plus plenty of top-notch wine).
20 Victoria St. 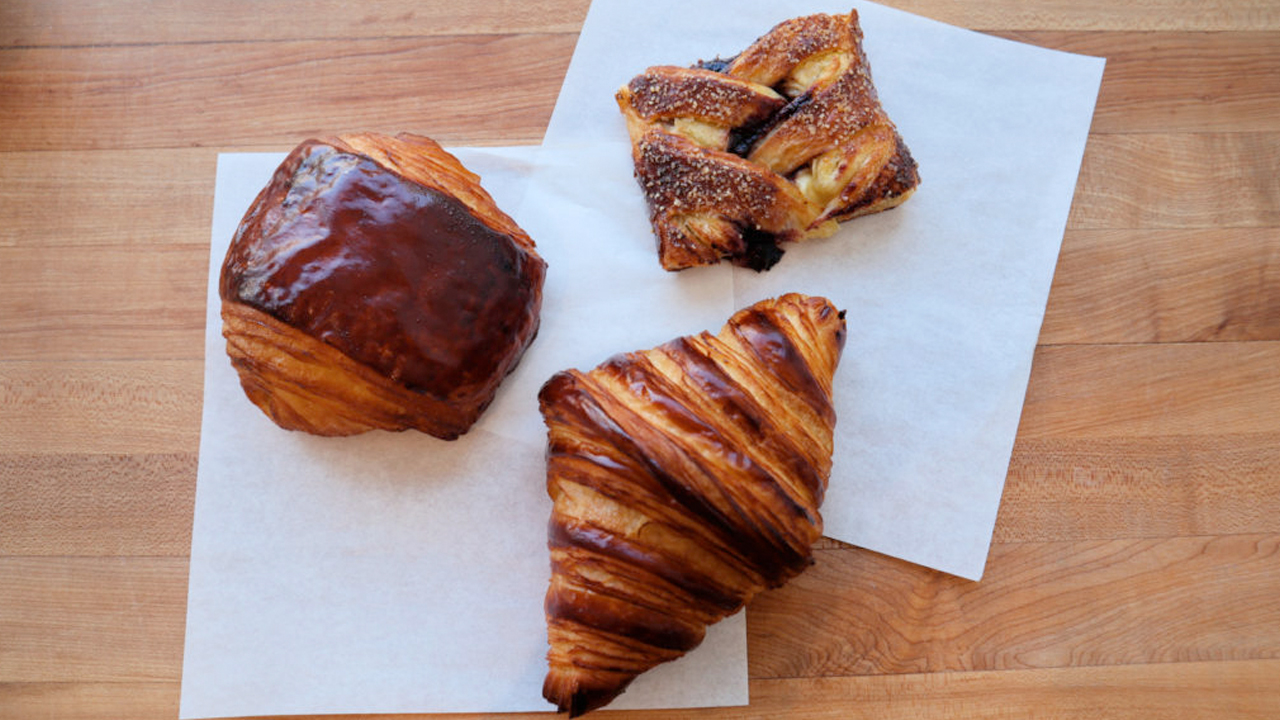 Emmer is selling baked goods out of its new Harbord Street location. Previously operating out of Donna’s, Emmer offers ham and cheese baguettes, bacon butties, breakfast sandwiches, canelé and several different varieties of croissant. If you’re hoping to snag some of Emmer’s delicious baked goods, arrive early and be prepared to line up.
161 Harbord St.

The grand opening of Baroness Bubble Tea marks the second Canadian location for the brand. The popular chain has locations across Asia and stands out in a saturated market by using oat milk as opposed to whole milk, making the drinks thicker and sweeter. Baroness is known for its brown sugar pearls but also serves smoothies and iced teas.
421 Yonge St.

Palgong Tea has a new location in the city. The popular Korean bubble tea chain has partnered with Jakeman’s Maple Products, so you can rest assured that you’re getting a drizzle of genuine Canadian maple syrup in your next iced maple milk tea. Palgong Tea also has a dessert menu that features sweet treats like macarons, cheesecakes, raw cookie doughs and ice creams.
53 Bloor St. E.

Named after the British term for the bridge of a song, Middle8 is the latest restaurant and soon-to-be live music venue to hit Yorkville. Chef Andrew Carter quietly opened the restaurant in the former Amber nightclub on Yorkville Avenue in June of this year, after pandemic-related delays. The menu focuses on oysters and charcuterie as well as seasonal meals and small plates.
119 Yorkville Ave.

Little Sister, a popular midtown restaurant known for its distinctive Dutch-Indonesian fare, has opened a second location. Little Sister’s menu is divided into skewers, snacks, sides and traditional dishes, many that feature the restaurant’s homemade spice blends. The menu consists of small- to medium-sized dishes perfect for sharing.
2031 Yonge St.

Cops Doughnuts sells their mini doughnuts in three flavours: classic cinnamon sugar, the OG sour cream, and a weekly special (check their Instagram for the latest flavours). Past creations have included the ube glazed and lemon poppy seed glazed. All of their doughnuts are made fresh from scratch and are available as a 12-pack ($9), an 18-pack ($13.50), or in variety packs.
4 Matilda St.

Friggitello, named after the sweet Italian chili pepper, is a new Mediterranean spot in Kensington Market. Specializing in grilled chicken, the small but flavourful menu includes wraps, kebabs, donair and poutine. There are also plenty of veggie options to choose from, all packed with flavour and fresh ingredients.
181 Baldwin St.

Opening a restaurant mid-pandemic presented a perfect opportunity, says Thanawat “T” Khamchum, co-owner of Yaksha South East Asian Eatery. Securing the new location was a steal for T and his wife, as many landlords reduced prices to try and attract new tenants. The takeout-inspired menu features various southeast Asian dishes broken down into rice bowl variations. You can build your own bowl too.
2109 1/2 Yonge St.

Domaine Mamo is inspired by French-Italian regional cuisine and offers dishes influenced by the Maritime Alps and the Mediterranean coastline. Owner Robert Prete has been serving guests in midtown for 30 years, and master chef Didier Leroy was born and raised in France. Domaine Mamo has a patio out front and offers private dining and catering.
581 Mount Pleasant Rd.

Where to find the city’s latest and greatest frozen treats to satisfy your sweet tooth.

Creamery X in Toronto turns classic recipes into new custard frozen ice cream. Run by creative entrepreneurs Bonnie Gallant and Melissa Baird, this small-batch spot has a handful of creamy flavours, which can be packed into pints to take home too.
124 Jarvis St. 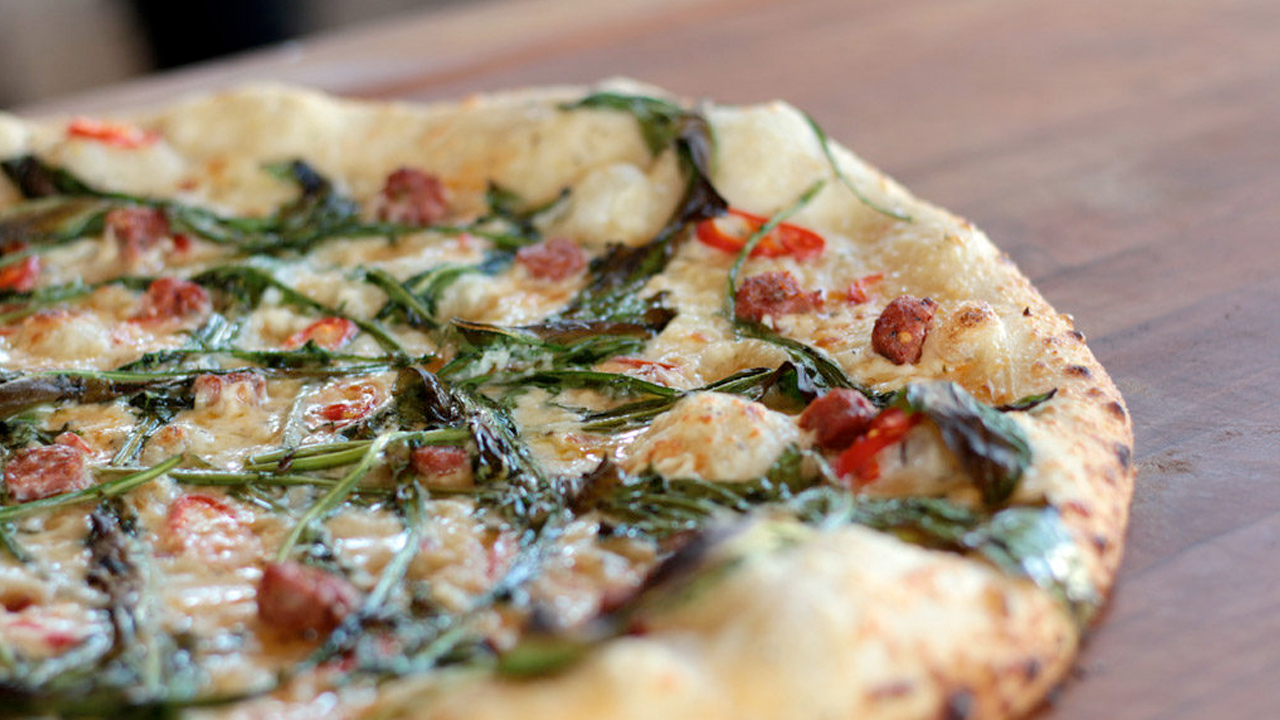 Conspiracy Pizza has found a new home next door to Churnt Up. Dan Rios and his team are known for their self-proclaimed “weird” pizzas, like the Bay of Pigs (white sauce, mozza, pulled pork, bacon, red onion, pickles and mustard sauce). Alongside the weird pizzas, the joint serves up classic and vegetarian pies, but also other light bites, like chicken wings and salads.
856 Eglinton Ave. E.

Taiwanese bakery chain Hazukido opened in Toronto, marking the brand’s first North American location. Launched in 2014, Hazukido now has a whopping 200 locations around the world. The chain is known for its carefully crafted croissants, which are available in dozens of sweet and savoury flavours, such as the molten salted egg yolk tart.
595 Bay St., Unit E-01

New Leaside patty and pot pie purveyor Phamilyeats has been a labour of love for owner Peter Pham. Phamilyeats makes every single patty by hand, right here in Toronto. Patty flavours include beef (mild to extra spicy) and veggie. The dairy-free pies include the braised short rib pie and the chicken pot pie, both loaded with tender chunks of meat and topped with a light, flaky puff pastry.
858 Eglinton Ave. E.

Opening Harlem Bodega, Little Portugal’s new Puerto Rican vegan takeout spot, has been a longtime dream for owner Juss (who prefers not to share his last name). Harlem Bodega has a menu that features classic bodega sandwiches but with a twist — the beef* and chicken* found in every sandwich or burrito is actually plant based! Many items are also gluten-free. Sides include seasoned fries, pastelillos, tostones and fried rice and beans.
1307 Dundas Street West.

Midtown is now home to the first Toronto outpost of Abyssinia YYZ. Specializing in Ethiopian and Eritrean food, the former of which is known for its plentiful vegan options, the restaurant’s menu includes an abundance of stews and stir-fries served with injera, a sourdough flatbread used to scoop up delicious bites.
2038 Yonge St.

The Backyard Smokehouse is a welcome addition to the Annex, especially if you’re looking to get your hands on some smoked chicken. Its extensive menu includes many juicy burger combinations and all your BBQ favourites: brisket, pulled pork, ribs, smoked chicken and smoked shrimp, all ranging from $9 to $35. There’s also an array of sides including cornbread, fried pickles, and more.
264 Dupont St.

If it’s mouth-watering brisket you’re after, you’ve come to the right place. Night Owl is now hosting BBQ joint Matt’s Smokehouse. After popping up at several locations across the city, Matt and his team are now settled in Little Italy. Don’t miss out on the rib and wing combos or the towering 10-hour pulled brisket sandwiches. Mama’s cornbread, with bites of candied jalapeno and cheddar, is an absolute must.
647 College St.

The best new spots to find the perfect decked-out patty of your dreams.

Matty’s Patty’s opened its doors in October 2020 and has been satisfying cheeseburger cravings ever since. Offering seven mouth-watering combos, like the double patty cheeseburger, topped with American cheese, lettuce, and a double patty on a sesame bun.
923a Queen St. W.

Calgary’s much-loved Pigot’s Burger Club now has a Toronto location. There are seven options available, many of which are seasoned with chef Pigot’s secret spice blend. Tater tots, fries, and salad are some of the available sides.
1 Adelaide St. E.

It’s good vibes only at GG’s Burgers, a new spot in the Beaches. Along with a series of smash burgers, GG’s also does crispy fish and chicken sandwiches and hot dogs. Sides include fries, onion rings, milkshakes, and funnel cakes.
681 Lake Shore Blvd. E.