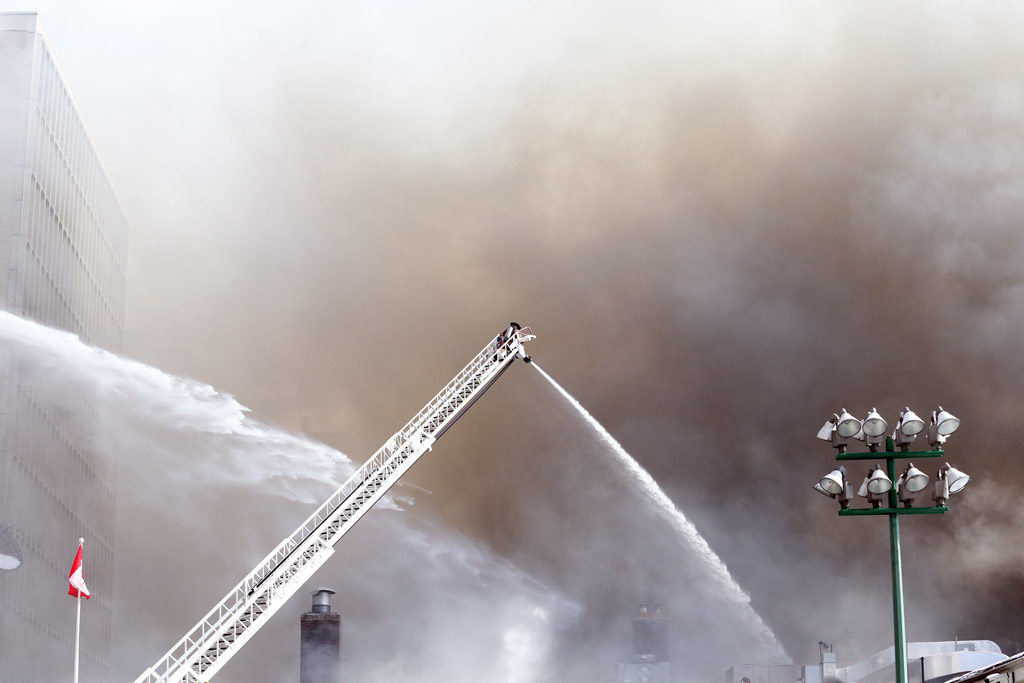 Shortly after 11:30 a.m. this morning, fire trucks were called to Wellington Street West, near Spadina Road, for a two-alarm fire. The buildings engulfed in flames were 422 and 424 Wellington St., two 19th-century heritage structures protected by the Ontario Heritage Act.

The buildings made up what was to be the base Wellington House, a slick-looking condo development by Brad Lamb. At the time the fire broke out they were vacant, though construction crews were working in the area.

Building is on fire in front of my building in Toronto. #wellingtonfire pic.twitter.com/8nHivMXxqw

Many took to Twitter to share videos of the heavy black smoke that wafted through the core.

Fire at the heritage building on Wellington. Quick response by @Toronto_Fire to get it under control! 👨‍🚒👩‍🚒🚒🙌 pic.twitter.com/92IXMYQ9mg

As examples of the Queen Anne Revival architectural style, the much adored McLeish-Powell Houses have significant cultural value to the city of Toronto and are important remnants of the old character of the King-Spadina neighbourhood.

Nothing like this in Toronto. Wellington House is our most striking building to date. Can’t wait to build this world class building. For more information go to https://t.co/Iy4iYvG4RE #TorontoRealEstate #TorontoRE pic.twitter.com/6EVxeIFEh6

Wellington Street remains closed at Spadina Avenue due to the fire investigation. No injuries have been reported.