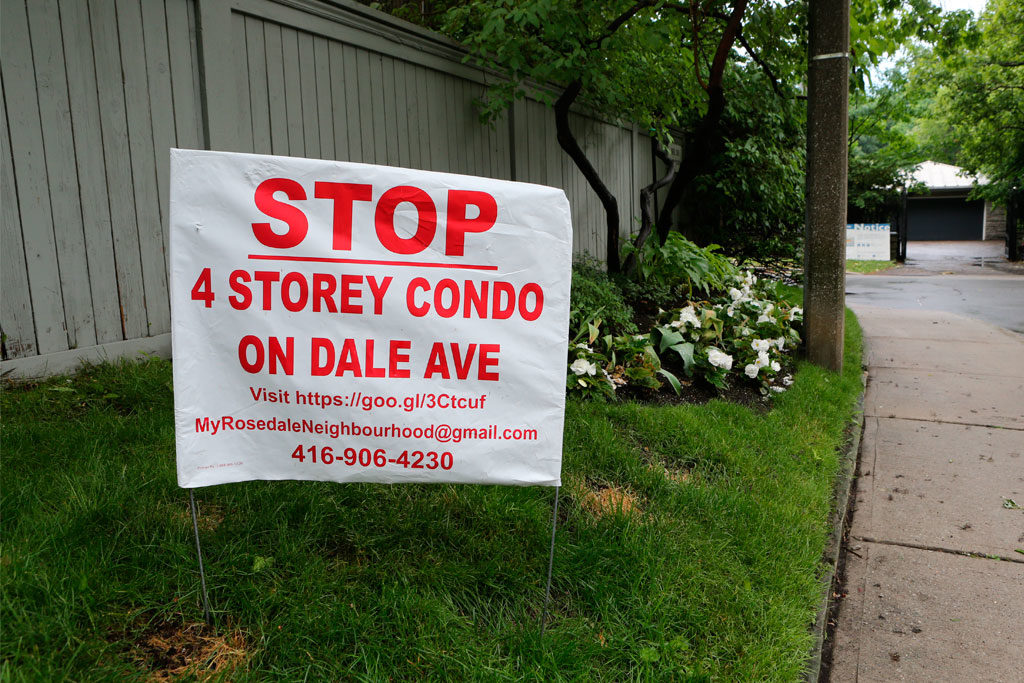 For two years, Rosedale neighbours have been fighting a developer’s plan to tear down three single-family homes on Dale Avenue and build a four-storey condo. Now, the heritage status of one home has been called into question, which could put the project in jeopardy.

Developer Platinum Vista submitted plans for the 26-unit project for 5, 7 and 9 Dale Ave. in the South Rosedale Heritage Conservation District (SRHCD) in 2016 and has held several community consultations since.

On June 20, the Toronto Preservation Board voted to deny the developer’s demolition permit for the three homes and grant individual heritage designation to one of them under Part IV, Section 29 of the Ontario Heritage Act. Toronto City Council will have final say in the matter, with a vote scheduled for June 26.

In 2016, residents closest to the site formed My Rosedale Neighbourhood (MRN), which has spearheaded opposition to the project.

Kathy Lee, founder of MRN, said the group commissioned its own heritage study in 2017, which prompted them to nominate 7 Dale Ave. for further heritage consideration.

“We’re getting beaten up by people who say this came in at the eleventh hour.”

“We’re getting beaten up by people who say this came in at the eleventh hour,” Lee said. “But unlike developers who understand the system and how to operate within it, community groups such as ours are all volunteers.”

The bungalow at 7 Dale Ave. was constructed in 1944–1945 by award-winning architect Gordon Adamson — information that was apparently missed during the SRHCD study conducted in 2002.

“The emergence of new information 15 years after the HCD was adopted points to the possibility that other C-rated properties may also warrant a B rating if additional research is undertaken,” says a city staff report.

According to the report, the bungalow marked a turning point in Adamson’s career from the Colonial Revival styles he was known for in Rosedale and Forest Hill to the Modernist designs of his later years (he went on to design Victoria College’s E. J. Pratt Library in 1960).

Platinum Vista already appealed the official plan amendment and rezoning  applications to the Ontario Municipal Board on Nov. 10, 2017.