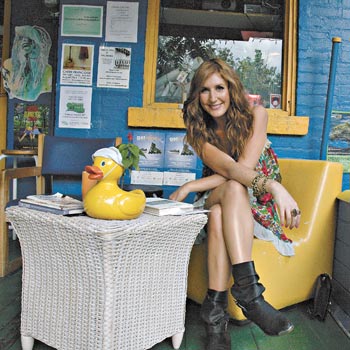 IN THE HEART of the U of T student district, just east of Chinatown and south of the imposing concrete turkey (or is it a peacock?) that is Robarts Library, lies Baldwin Village. It’s easy to miss. Indeed, even calling it a village seems, at first, to go beyond exaggeration.

Taking up little more than a block, the bit of Baldwin that isn’t residential is tiny. Nonetheless, this neighbourhood is home to an abundant array of restaurants and cafés, favoured by students and often flooded with visitors from the nearby AGO.

Visiting Baldwin Village with me is Jessi Cruickshank, a former U of T student who lived in the area before she hit the big time as co-host (with Dan Levy) of MTV’s The Hills Live After Show, the number one Canadian-produced show on the network. Hailing originally from Vancouver, Cruickshank says that Baldwin helped her learn to love this city.

“It was very hard for me to move from Vancouver to Toronto,” she says. “I was living in this concrete jungle … and I was slightly traumatized. So the first time I came to Baldwin, I remember thinking, ‘Ah! There is life in this city!’ It was all lit up, and there were people everywhere and all these cute restaurants. It was one of the first things in the city that I really fell in love with.” Speaking of falling in love, we stop briefly at Margarita’s Fiesta Room (14 Baldwin St.) — a crowded Mexican cantina with a popular patio out front. It’s the spot where Cruickshank began a college romance that would last five years.

“My first date ever in university was at Margarita’s,” she explains. “I remember thinking, ‘I hope this is a strong margarita because I am so nervous!’ It was a great date. I like to say Margarita’s spawned a little romance … apparently, the margaritas were strong enough.”

Cruickshank’s favourite menu items at the joint are fairly classic. “I love their guacamole,” she says. They have it in these big, black, authentic clay pots. It’s delicious. That and their banana margaritas.” Lime is more traditional, but Cruickshank isn’t. “If you can pack as much sugar into one beverage as possible, I’m happy,” she says.

Hard to believe, seeing as how the young TV host is as lithe as any Hollywood starlet. Maddeningly, of course, she says she doesn’t really watch what she eats. “Guacamole, man, I figure it’s vegetable. Anything that’s green is good for you. And I’m a vegetarian, so it’s always good to get in those beans and cheese … That’s protein.”

In Baldwin Village, being a vegetarian is no problem. The street is home to Bloom Creative Cafe and Healthy Eatery (45 Baldwin St.), where patrons can be seen reading while nursing their cold smoothies.

Cruickshank ponders the menu’s tofu scramble, but decides that she would likely order a grilled veggie sandwich or stuffed pita wrap. “Anything with grilled veggies and I’m sold,” she says. Herbivores are also accommodated at the aptly named Vegetarian Haven (17 Baldwin St.), which features Asian-inspired dishes with a lot of tofu, tempeh and seitan.

“I became a vegetarian when I was eight,” Cruickshank tells me as we stroll along. “My dad brought home lobsters from P.E.I., and my sister and I thought they were pets, so we got cages and decorated them and everything. And then my dad said we were going to give them a bath, and we put them in a pot of boiling hot water…. That was it for me!” she says.

Green eateries aren’t the only ones that cater to vegetarians on the Baldwin strip. South Asian food is also in abundance. Matahari Bar and Grill (39 Baldwin St.) sits just doors down from Jodhpore Club Indian Restaurant (33 Baldwin St.) Both offer vegetarian curries and other Asian treats. Cruickshank is a fan of curry, particularly the light, coconut variety.

Aside from edible options, Baldwin Village does offer a bit of shopping and services, too. For film enthusiasts who turn up their noses at much of the mainstream, there is The Little Video Shop (13 Baldwin St.), a place devoted to independent, foreign, and classic films.  Cruickshank, who was a member of Innes College (U of T’s film school), says all her friends were "huge film nerds" who would visit the store regularly.  Though not as big a film buff as she would like to be, Cruickshank says regular field trips to the shop with her classmates gave her a decent celluloid education "by osmosis."

Just a few doors down, we hit Chada Import Gallery (25 Baldwin St.), a shop proffering sarongs and batik fabrics on the sidewalk out front. Work travel required Cruickshank to delve more into world fashion recently. She recently returned from Kenya and early in the year starred in a 30-minute documentary about a visit to Udaipur, India, as a Free the Children ambassador.

“I was so happy to have stores like this to prepare for my trips,” she says.

Chada is packed with treats from places like Indonesia and Burma. Think bedspreads, wall hangings, jewellery and ceramics, perfect for global style enthusiasts or students on a budget.

The affordability of Baldwin Village is one of its best features. Prices are low to mid range across the board, and Cruickshank says she loved the neighbourhood in part because she experienced “real deal college poverty,” that also spawned her love of vintage clothing. Dressed the part, in head-to-toe second-hand even now, the young redhead should blend in on Baldwin, where boho reigns, but somehow she still stands out in the crowd.