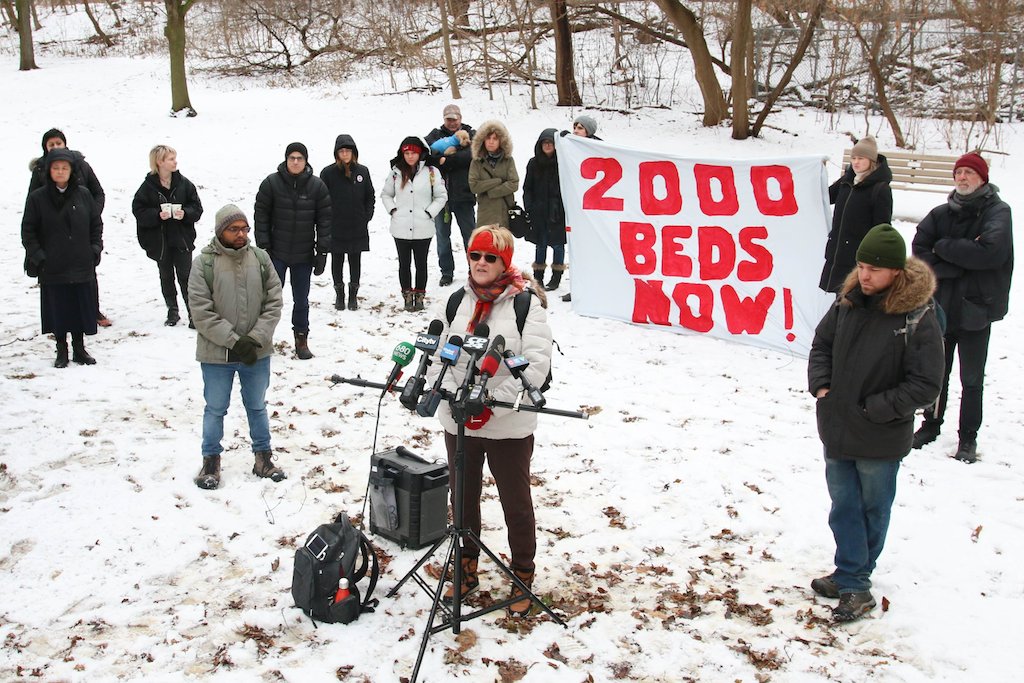 The City of Toronto cleared out encampments of Toronto homeless in Rosedale Ravine this morning. This occurred despite protests from local groups who argue that the city has a shortage of shelter beds.

The city’s Parks, Forestry and Recreation department conducted a similar sweep of the area last year.

“There is no justification for these sweeps in the midst of a deadly shortage of shelter space in the city. People are camped outside in the bitter cold because the housing crisis rages on unchecked and the City’s shelter system is overwhelmed,” read a letter penned by a coalition of groups along with Toronto street nurse and homelessness advocate Cathy Crowe on behalf of the Shelter and Justice Housing Network.

The letter is part of a petition on Change.org directed at Mayor John Tory, who defended the move during a press conference on Jan. 6 citing health and safety concerns.

“It is not safe and it is not appropriate to have people living in encampments in the city, so we go out about dismantling those, the city does, in a very orderly fashion,” Tory said to reporters.

Mayor John Tory with that unmistakable Palm Beach tan explains why he’s sending professional city staff to kick the homeless out of the Rosedale ravines and demolish their encampments. , (That’s @TCDSB trustee @normsworld looking on, in the spirit of Christ, presumably) pic.twitter.com/4JirCv4U6e

Street nurse and longtime homelessness advocate argued that a recent fire in the area was being used as an excuse to clear out the area.

Recent fire being used as an excuse by City of Toronto to evict #homeless in Rosedale Valley. If city wants to minimize fire risks these should be provided to outreach agencies. Fire vessels. @metromorning @RafiInterfaith @c_shadowspaces @SHJNetwork @OCAPtoronto pic.twitter.com/ECX5z4qDrX

According to an article in the CBC, the city, which operates 7,219 overnight shelter beds across its system, gave local homeless residents 15 days notice that they had to leave the area. Mayor Tory assured that anyone evicted from the area today would be able to find space in the shelter system tonight.

He also stressed that the city is making progress on the issue, and needs other levels of government to step up alongside Toronto to continue to make meaningful change.

Some critics of the city’s move to clear out that area point to the neighbourhood of Rosedale suggesting that the area’s well-heeled residents might have had a hand in urging the city forward.

This is Rosedale, home to Toronto’s elite. note the ravines that surround it and separate its multi-million dollar homes from the rest of the city. Those ravines are also home to the homeless who have set up encampments. @JohnTory will be tearing down those encampments Tuesday pic.twitter.com/J3ZY8gZMvq

On the morning the city was set to clear the area, the homelessness coalition held a press conference reiterating that homelessness needs to be declared an emergency and 2,000 more shelter beds should be added to the system.

The shelters are full. There’s no housing. Instead of forcibly evicting people from encampments, we need our city to be honest about the crisis we’re facing, declare an emergency and provide access to shelter and housing for those in need.https://t.co/rsDruqiiIl

In one week, community members are invited to gather at the Church of the Holy Trinity where the 1,000th death will be added to the Toronto Homeless Memorial.