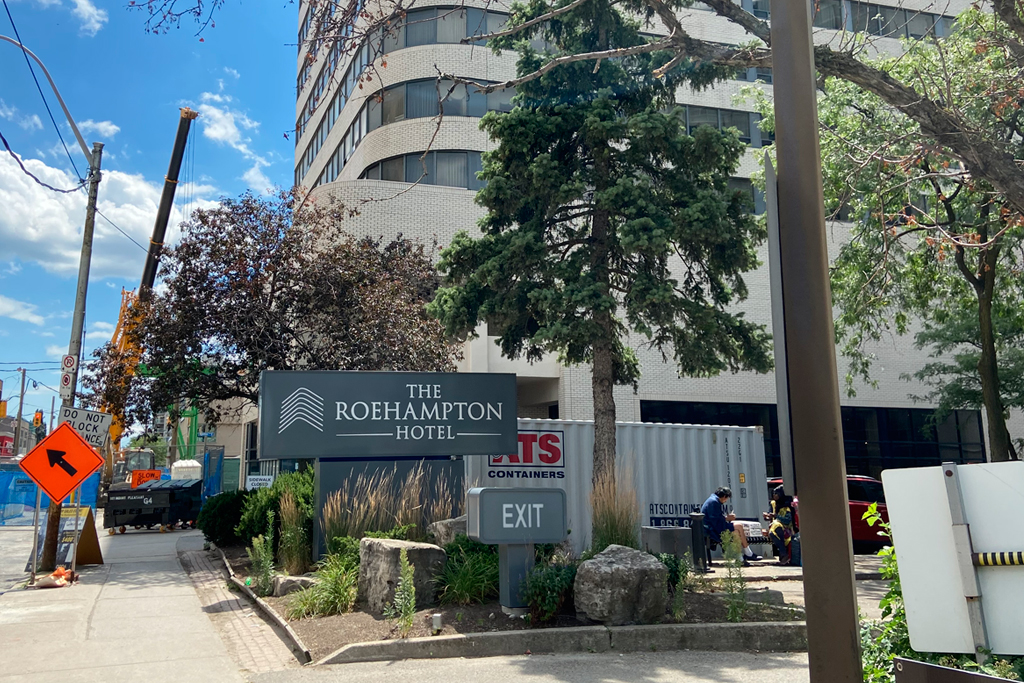 A north Toronto community is raising questions and concerns over the former Roehampton Hotel put to use by the city of Toronto as a temporary shelter to house residents experiencing homelessness during the COVID-19 pandemic.

The Roehampton Hotel on Mount Pleasant is a stark reminder of 60s architecture and budget travel accommodations. A sign on the hotel’s website says “temporarily closed until further notice,” but area residents have noticed some activity lately.

Reports of shipping containers in the hotel parking lot and large crowds of people congregating outside the building have some residents expressing concern.

The city gained possession of the Roehampton Hotel in June (one of 17 new shelters) and began moving residents into the hotel on July 3. Facing pressure to protect homeless populations from COVID-19, the city moved quickly to lease buildings, set up shelters, and move homeless residents.

Residents living near the Roehampton Hotel were not informed of the newly-opened shelter. Many people took to Twitter to ask local city councillor Josh Matlow about the recent changes hoping for answers.

Hey Josh – what’s going on that the Roehampton Hotel all of a sudden? Has it be repurposed a shelter or injection site?

Matlow has been communicating with residents and the city, hoping to open up the lines of communication and put resident minds at ease. He stresses the importance of supporting homeless populations, but he strongly advocates for community residents’ voices and opinions.

“Our support for our city’s most vulnerable is unwavering. Each individual at the Roehampton needs support, but the city must ensure that the community is engaged in these discussions,” he said.

According to the city’s Shelter, Support, and Housing Administration, a regular communication process is in the works.

“In the meantime, residents have been provided with the on-site manager’s contact,” said city of Toronto senior communications advisor Kris Scheuer.

Matlow has also suggested that a stakeholder group of local school boards, condo associations, and other residents be formed and consulted on changes to the neighbourhood. He said that the city has agreed to this demand.

“The city must have a plan in place to care for the local neighbourhood and property,” said Matlow.

Security is in place at the shelter, according to the city.

“The site will be staffed 24/7 with additional video security surveillance and for at least the interim there will be two security guards on-site 24/7,” said Scheuer.

Another question is whether essential services, such as drug addiction counselling and therapy, are in place at the shelter.

“The site will be operated for the City of Toronto that offers a wide variety of supportive case management services. City staff will work with clients to navigate challenges related to mental illness and/or addiction. The site operates from a harm reduction approach as outlined by the City of Toronto Shelter Standards,” said Scheuer.

It’s unclear whether those measures are currently in place or will be part of a future plan. There has also been some concern from homeless advocates who suggested that the city is placing two residents in the same room at the Roehampton regardless of preference.

The practice is known as “doubling-up” and becomes problematic when a recovering addict is assigned the same room with someone actively using.

“We had to fight like hell to make sure nobody was doubled up unless they wanted to be, but it has already happened with the previous move in,” said Doug Johnson Hatlem, street pastor at Sanctuary, in a recent tweet.

Matlow recognizes the need for homeless support and notes that ignoring some issues (such as drug addiction) is fruitless.

“I’m hearing from people who want to help, but people live there who want a plan. There must be a process in place; there must be steps to follow. We cannot ignore problems. Let’s deal with it,” he said.

The city has leased the Roehampton site for two years and could extend the lease. Residents should receive a notice about the upcoming virtual community meeting in the coming weeks.