Hope is where the heart is | TRNTO.com
Skip to content 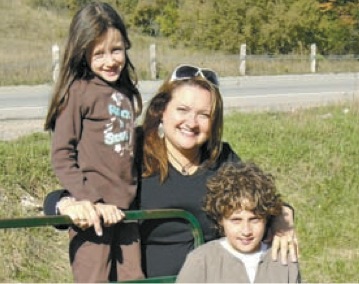 NO ONE EXPECTS to hear the word “cancer” when awaiting a blood test result, but this is exactly what happened to Elena Gallucci. Then, the young mother was only in her early 30s when she became an in- patient at the Princess Margaret Hospital for a quarter of a year. Since that day, Gallucci has worked tirelessly to raise nearly $1 million for the cause, and has just been awarded City of Vaughan’s Ward 2 Resident Civic Hero Award for her efforts.

In 2002, after seeing her doctor for pains and lack of energy, Gallucci’s world was turned upside down. What she anticipated to be a vitamin K deficiency was a diagnosis for leukemia. “You never think the worst could come your way,” she says.

“I remember sitting in the doctor’s office and feeling like a fly on the wall, watching somebody else go through this,” she says of that life-changing day. The very next morning she was admitted to Princess Margaret Hospital and for nearly three months, that is where she stayed.

Gallucci was just 33 at the time. She was working full-time as a kindergarten teacher, happily married and caring for her two small children, 2 and 5 years old.

She was determined to win her battle from the start. “I continued to fight and survive,” she says. “My two children were my fighting cause and significant in my healing.”

During her recovery, together with her family and friends, The Gift of Life Walk was born, an annual 5K walk for leukemia. The walk has attracted hundreds of people and raised more than $750,000 for Princess Margaret Hospital throughout its five-year span, beginning the year of her diagnosis.

“You feel very alone and isolated and I want them [cancer patients] to know, there is so much support out there, you just have to open up and reach out,” she says. “Princess Margaret is one of those places. It’s a special kind of hospital and special kind of people.”

Gallucci used this walk to further awareness about the disease for the hospital. She took the event to the chairman of her school board and promoted it to public and Catholic schools. “We were able to donate an award to the public school who raised the most money,” she says, “and we donated a religious statue to the Catholic school who raised the most. It was given to them in a ceremony and blessed by the priest.”

Today, Elena Gallucci is 42 years old. She says that over the past nine years she has changed, not only because she was diagnosed with leukemia, but because of what she has learned from having it. She now lives by the famous words of Mahatma Gandhi: “You must be the change you wish to see in the world.”

The Post salutes Elena Gallucci for raising awareness and funding for leukemia for Princess Margaret Hospital.