How does thy garden grow? Five tips for eating locally | TRNTO.com
Skip to content 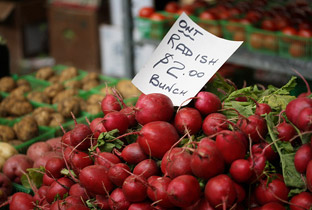 The sun is shining and the asparagus is growing – so what on earth are you doing at the supermarket? Southern Ontario’s growing season is picking up and filling gardens, farmers’ markets and local greengrocers with fresh produce that hasn’t trekked halfway across the globe. If there was ever a time to pay attention to where your food comes from, lower your carbon footprint and support an Ontario farmer, it’s now.

Debbie Field, executive director FoodShare Toronto, says there are plenty of ways to eat healthy, local food. “Any consumer, no matter where they live, can do better or worse things when it comes to food choices.” Here are some of Field’s tips for getting into the locavore spirit.

1. Grow your own: “In Toronto, we have such good soil — it is easier to grow food in downtown Toronto than the whole island of Newfoundland,” she says, noting that backyards, rooftops and even balconies are all ideal places for a small vegetable patch. And if you don’t have room where you live, try joining a community garden. “You can save about $100 a week in the 10 most productive weeks of the year by growing a certain amount of food,” Field explains.

3. Preserve food when it’s in season: Canning, freezing and using dried foods like beans are great ways to have access to a more diverse selection of local produce all year long.

4. Shop at outlets that prioritize local food: “In Toronto, we’re extremely lucky because we get lots of small greengrocers who go to the food terminal and really do get fresh, affordable, local produce,” she says. “Instead of maybe going to a large grocery store, look for those outlets, whether they are farmers’ markets or greengrocers.”