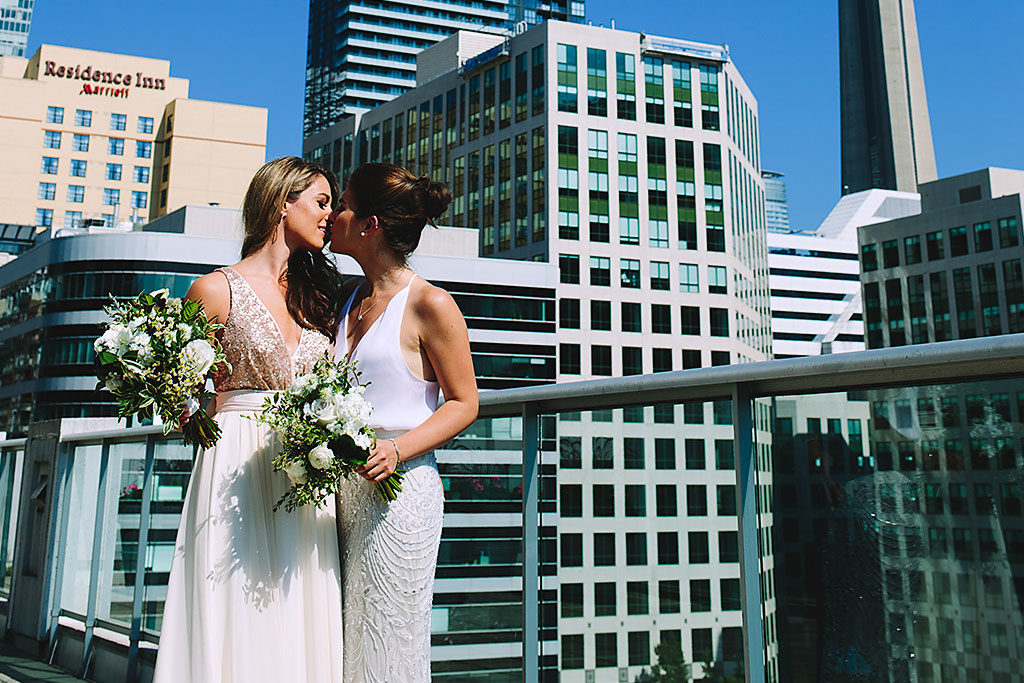 Samara Shuter is best known for her larger-than-life paintings of headless men wearing everything from tailored suits to motorcycle jackets. Her most recent showcase, titled Rhythm + Treble, took place Nov. 18 at the Spoke Club. Back in her film industry days, she met Emily Krouse, and the two were married in 2015. Here they dish on how they met, their proposal and their wedding.

How they met
Samara: Online, before it was cool. It was 10 years ago, before the iPhone, before swipe right was a thing. Emily was living in Florida between her second and third year of university, about to move to D.C. for an internship on Capitol Hill. I was living at home in Toronto working in the film industry. We had both recently joined a dating website called Tangowire, and when I joined, I saw Emily was a “new profile” on the homepage.

The first date
Emily: Since we met online, our first official date was also the first time we ever met, so it was really exciting. Sam flew to Washington, D.C., to meet me in person. We spent the weekend together. It felt like we had known each other for years. It was so natural and organic, even though we had only been chatting online, on the phone and via Facebook video messenger, but there was an immediate comfort with each other.

The courtship
Samara: We did long distance for six years (five and a half of which were before we were engaged), and so a lot of our courtship was memorable since we didn’t see each other that often.

The proposal
Emily: It was my last semester of law school, and I was in desperate need of a vacation, so when spring break rolled around I was thrilled to be heading to Sam’s family’s country house north of Montreal for a week. We spent our first night up north with our best friends, who of course knew Sam’s plan, but I was totally oblivious. I begged them to come back the following weekend to hang with us since we’d still be up there, and they lived in Montreal, but they said they couldn’t. (They couldn’t because they would be in Toronto for our surprise engagement party.) A couple of days later, Sam wanted to go on a walk (unusual for her). I didn’t feel like it because it was drizzling, but she insisted. She wanted to spray-paint our initials on a rock. After an hour of walking, we found a large rock up an embankment. We climbed (and fell) but made our way to the rock. She started to spray-paint, and I wasn’t paying attention. When she said she was done, she looked at me and then looked at the rock. From her red spray paint and the rain, it looked like the rock was bleeding, but I could sort of make out, “Will you marry me?” I thought she was joking. We had been fake proposing to each other since our first year together. But I could tell from the look on her face that she was serious. She pulled a small black box out of her jacket and got down on one knee in the snow. We were both flooded and overcome with emotions that neither of us can tell you who said what after that.

The wedding
Emily: We were married on Aug. 15, 2015, (eight years and one day after we met online) with 155 guests at Second Floor Events on King West. I wore the Eden dress by Truvelle, and Sam bought a sample sale dress that a close friend of ours cut and reworked into Sam’s ideal dress.

The entertainment
Samara: We had Choir! Choir! Choir! play three songs during the ceremony: “Landslide” by Fleetwood Mac as our families walked down the aisle, “The Way You Make Me Feel” by Michael Jackson as we walked and “We Found Love” by Rihanna after we were married and walking back up the aisle. It was amazing, they did the best job, and they were a complete surprise to our guests and families.

The food
Emily: We had Toben Food by Design do a fully custom menu for us. We wanted a Greek/Moroccan/Israeli family-style meal, and Toben and his team delivered tenfold. The food was fantastic, the service was perfect, and we heard from so many guests that it was the best food they had ever had at a wedding.

The honeymoon
Samara: A year later we went to Greece for 10 days. We went to Athens, Mykonos, Paros and Santorini. We can’t recommend that trip enough.