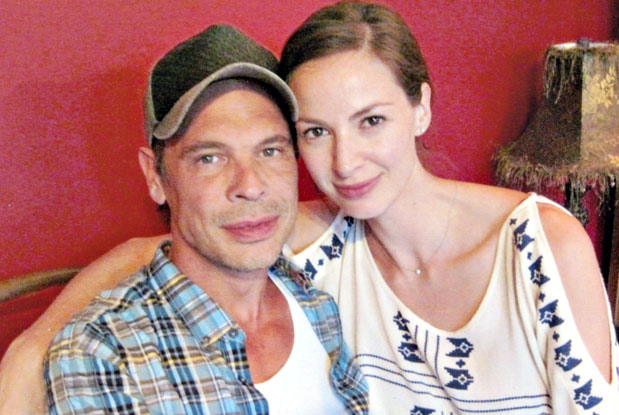 The model who marries a rock star. Sound like a cliché? Well, consider this pair’s story, which is anything but. For Christine Tizzard, host of CBC’s Best Recipes Ever, and rock ’n’ roller husband Ian Thornley, there was no star-studded wedding or lavish honeymoon. They’re actually much more down-to-earth than your typical showbiz couple. Except, of course, for all of the travelling, all the time being on set, and.… Actually, we’ll let Christine explain:

How they met
Ian and my brother (Ken Tizzard, who is also a musician) were good friends. They used to tour together. Of course, I was familiar with Ian’s music (being on the radio and in the Canadian music scene), and I would run into him at my brother’s shows or music events. We had been very aware of each other for some time before we actually went on our first date. My brother would always say to me, “You know, Ian has been asking about you.” So much for the “hands off my little sister.”

Their first date
Barberian’s Steak House. I picked him up, he paid.

The courtship
After our first date that seemed to be it. We were pretty much together all the time (when he wasn’t touring).… People always ask me: “What is it like with him gone so much? How is it on the kids?” Well, it is all they know, and this is our normal. It can be hard for the first few days, but then everyone gets into a routine.

The marriage
We just celebrated 10 years last June. Maybe when we retire we’ll go [on a honeymoon]. There was always something more important than a honeymoon. We were married just down the street from where we live now, in his dad and stepmom’s backyard. It was very small and intimate, less than 30 people attended the ceremony. Then we rented out an old church for the reception after, with the usual catered food, and hired cover band. Sometimes we both wish we could do it all over again, differently. Maybe because it went by so fast it feels like we weren’t even there. It’s kind of surreal.

The kids
We have two kids: Ozzie, 13 (who is Ian’s stepson) and Sophia, 10. Yes, I was pregnant at the wedding, but it was intentional.

Their lives now
Our lives are much calmer. Ian has been very lucky and is still doing what he loves. I changed my career path a few years after having Sophia, taking the plunge and going back to school. I immersed myself in the food industry. We both did our fair share of “living” before having kids, him as the rock star, and I was modelling and travelling all over the world at 15. The high points now revolve around … Christmas, vacations and birthdays.

Their shared goals
To get away more often, take that trip to Hawaii, watch True Detective this week … financial stability and raising good kids.

Relationship advice
Either you’re in or you’re out. This is the first and most important question you have to answer. Then, if you’re in, well, you have to find ways to make it work. You have to make sacrifices, try not to sweat the small stuff and laugh … a lot.