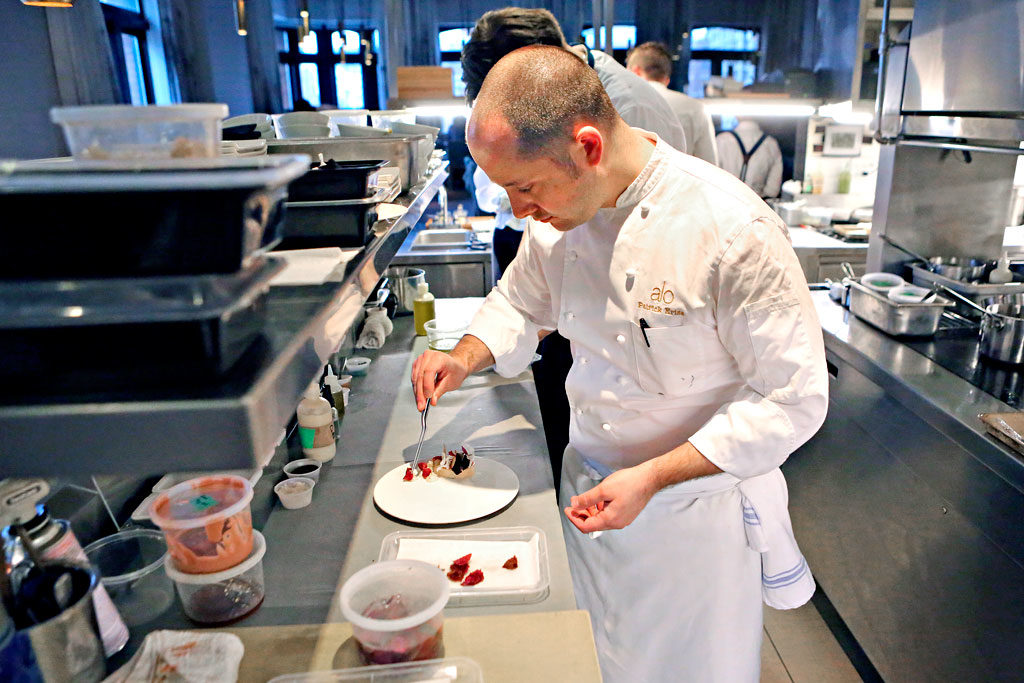 It’s the great double-edged sword of Toronto’s dining scene: we’re home to some of the best restaurants in the country, but actually getting a table at the city’s most spectacular spots is no easy feat. Never fear, we’re here to help. We’ve researched the reservation systems of some of the city’s top restaurants to bring you this guide to getting a table at Toronto’s best and busiest restaurants.

When the restaurateurs behind Khao San Road and Paris Paris team up, you know the result is going to be interesting. Favorites brings a fresh approach to Thai food, focusing on funky flavours and smoky BBQ dishes rather than the creamy curries that many  associate with the southeast Asian cuisine. Scoring a table for two is generally possible two days ahead of time during the week, but if you’re looking for a Friday or Saturday spot, you’ll need to lock in your reservation two weeks in advance. 141 Ossington Ave.

The menu selections are as lean as the seating options in this cosy Queen West bistro. Dandylion’s chef and co-owner Jason Carter has worked with some of the best chefs in the biz, including Marc Thuet and Susur Lee, and his culinary pedigree is more than evident in the restaurant’s simple, well-executed menu. Reservations need to be made at least three weeks in advance for a weekend table for two, whereas Wednesdays are best for walk-ins. 1198 Queen St. W.

This intimate French bistro from Zach Kolomeir, an alumnus of Montreal’s beloved Joe Beef restaurant, is one of the most coveted date night destinations in Harbord village. If you’re looking for your dream table on a weekend, the restaurant recommends booking at least two weeks in advance. Dreyfus also welcomes would-be diners to call from 4 p.m. onwards to check for same-day cancellations. 96 Harbord St.

Grant van Gameren’s sexy tapas bar at College and Ossington gives diners a dose of Barcelona via beautiful small plates and dramatic, moody interior decor. Bar Isabel takes a limited number of online bookings each evening — weeknight spots aren’t too hard to come by, but you’ll need to book about two weeks ahead for a table on Friday or Saturday nights. The restaurant also partners with the DINR app to fill last-minute cancellations. 797 College St.

A cult favourite among serious foodies, Edulis is known for its daily-changing, multi-course set menus that highlight seasonal, foraged cuisine. The restaurant opens up its reservations every night at midnight, and rumour has it that some devoted diners will stay up until the wee hours of the morning just to get the first available spots. 169 Niagara St.

Jen Agg’s Instagrammable Kensington restaurant specializes in shareable seafood small plates paired with a lengthy list of wines. To nab a weekend table at peak dinner hours, you’ll need to plan at least one month in advance; however, Grey Gardens also devotes spots to walk-ins at the bar on a “first-come, first-served” basis each night. If you’re hoping to grab one of the walk-in spots, your best bet is to arrive at 5 p.m., right when the restaurant opens. 199 Augusta Ave.

With a menu that changes daily, you’ll never know exactly what to expect at this contemporary Canadian restaurant perched above Bay station, but you can count on it being seriously good. Walk-ins are accepted, but Brothers recommends making a reservation (which generally needs to be booked six weeks in advance). The small space features largely counter seating, so this one is best for pairs. 1240 Bay St.

An oldie (by Toronto standards) but a goodie, this Summerhill mainstay is known for its sophisticated French cuisine, impeccable service and sparkling after-dark city views. Dining here on a weekend requires making your booking at least one month in advance. Scaramouche doesn’t have a policy against walk-ins, but doesn’t reserve space for them either. If you want to try your luck at scoring a walk-in spot, Tuesday is the best day to make your move. 1 Benvenuto Pl.

Alo regularly ranks among Toronto’s best dining experiences, so it’s no surprise that diners consistently clamor for a chance to taste chef Patrick Kriss’s exceptional French cuisine. Alo has implemented a specific reservation system to manage this high demand: Available dates for the upcoming two months are released on Alo’s website on the first Tuesday of every other month. 163 Spadina Ave.

Tables in Toronto don’t get more exclusive than Sushi Masaki Saito. Yorkville’s eponymous sushi spot, from Michelin-starred chef Masaki Saito, is a seven-seat restaurant that has just two seatings per night, with diners choosing between two set omakase menus priced at roughly $400 to $500 per person before drinks. Reservations can be booked through the restaurant’s website (expect to wait about two months for the next available spots). Although the restaurant does accept walk-ins, a strict reservation cancellation policy and the difficulty of getting a reservation in the first place make walk-in success unlikely. 88 Avenue Rd.