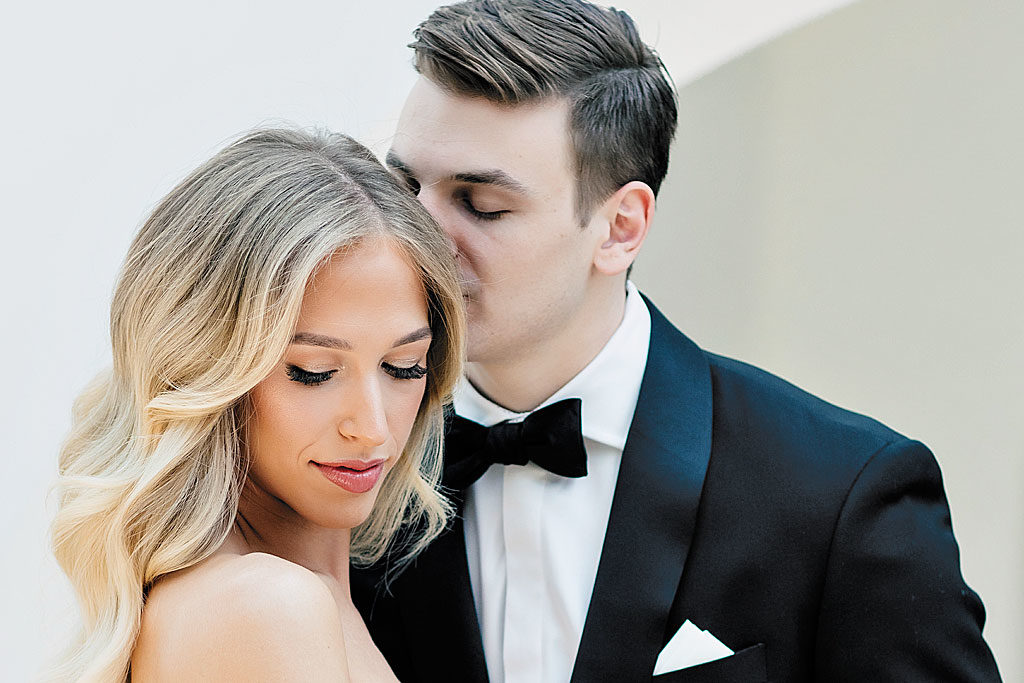 Leafs winger Zach Hyman tied the knot this summer with his longtime girlfriend Alannah. We caught up with the couple in time for the NHL pre-season this month.

Alannah: We met in high school and became friends in Grade 10 when we sat next to each other in English class. It took a couple of years before we began to see each other as more than just friends. Since we were only 17 at the time, we both didn’t realize that either of us had a crush on each other until one day when I asked Zach to drop me off at my house after school, and he took me home even though I didn’t live close by and this detour would mess up his pre-game hockey schedule. We had our first kiss that day and truly never looked back.

Zach: Our first date was at an Italian restaurant called Piazzetta Trattoria back in 2010. I remember the night being perfect. We shared a pizza, spent the night chatting away and realized we had more in common than we thought. Alannah, on the other hand, remembers things differently. Apparently once we finished our pizza, she went to the bathroom and noticed some food stuck in her teeth and blamed me for not telling her about it earlier. She still bugs me about it and believes I saw it and didn’t tell her, but that didn’t stop her from saying yes when I asked her to be my girlfriend later that night.

Zach: Well, it was originally supposed to happen at an intimate restaurant in New York City the weekend after our eight-year anniversary. However, my plans fell through when Alannah thought I had nothing special planned on Tuesday, the actual date of our anniversary. In reality, I had spent that day running around the city picking up her engagement ring and a scrapbook of photos I had made of us and had forgotten to pick up flowers on the way home. So I decided to propose right then and there in our apartment, which came as a surprise to both of us, but it ended up being a funny story and our family and friends came over after to celebrate.

Alannah: We got married in June at the Art Gallery of Ontario. Our wedding was everything we wanted it to be — the perfect mix of a meaningful ceremony, beautiful speeches, great food and a really fun party. A couple of days later, we flew to the south of France and the Greek islands. It was amazing to get away just the two of us after a very busy couple of months and revel in that newlywed bliss. Although, to be honest, it feels like we’ve been married for years!

Zach: We love travelling, going to the movies, bingeing TV shows and playing old school video games like Mario Party, which gets pretty competitive. I got Alannah into Game of Thrones a couple of years after we started dating, and it became our favourite show. We became obsessed with it and we dressed up as Jaime and Cersei Lannister for Halloween one year. We are also big dog lovers. We both grew up with family dogs (sheep dogs and poodles) and are excited to get one of our own down the road!

Alannah: We’ve always supported each other and encouraged each other to follow our dreams. Throughout our relationship, we have had personal and professional goals that we strove toward. We’ve been together for close to 10 years, and there were times in our relationship where we were apart for extended periods of time, whether it was for hockey road trips, studying abroad or even late nights at the office. Having some independence has shaped us into who we are today and made us stronger as a couple since we truly appreciate the time that we do spend together.

Zach: We definitely want to have a big family, two dogs and live in Toronto near where we grew up. I don’t think I’ll ever fully retire, but I’m sure we’ll both be following our passions and supporting our family.