Colin Mochrie teams up with Toronto hypnotist for daring improv show with a twist - TRNTO.com
Skip to content 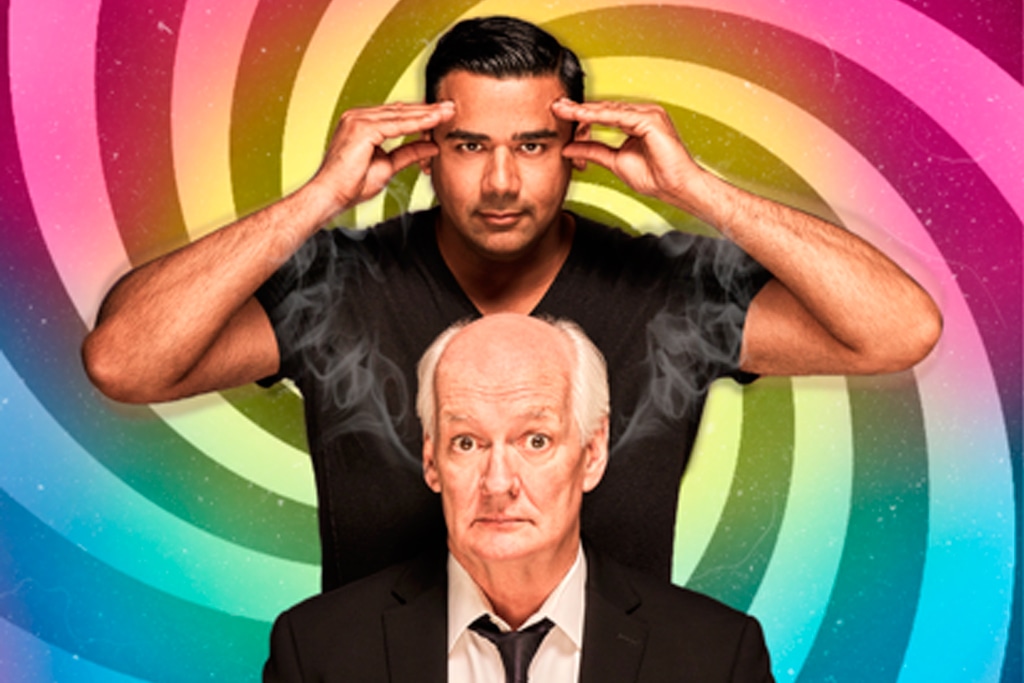 In the improv comedy legend’s latest gig Hyprov, audience members undergo hypnosis and join Colin Mochrie onstage to do improv. We chat with Mochrie before the mayhem ensues come Jan. 24 at the Meridian Arts Centre.

So what is hyprov?

It’s the melding of hypnosis and improv.

And how did this idea originate?

The hypnotist Asad Mecci was taking improv classes at Second City, and he thought a lot of the exercises being done were related to hypnosis. When you’re hypnotized, the part of your brain that deals with self-criticism and self-reflection is diminished and your creative part increases — same as when you improvise. So he thought it might be interesting to combine those two art forms that people don’t really believe in.

And how did you get involved?

He contacted my agent. We set up a meeting. I thought it was terrifying. So I said let’s do it.

What were some of the challenges getting the show ready for its premiere at the Edinburgh Fringe Festival?

The hard thing was there was no way for us to rehearse this. Our first show was really the first time we did it. But the show has been so much fun. We started touring North America in September. And as I’ve gotten more confident with what I can do with [the audience] and what I feel they can do, it’s just become a more fun show to do.

Have you been hypnotized?

I keep thinking I should just get [Asad] to hypnotize me before every show and tell me to relax and don’t worry about it.

Do you have trouble getting volunteers for the show?

No. It’s actually quite insane. Asad says, “Do you want to get this show started?”and asks for volunteers, and there is this mad rush to the stage.

That’s what I say. I think to myself: why, why do you want to do this?

Second City, of which you were a member, is celebrating 60 years. What fond memories do you have?

Most of my fondest memories are just the people I worked with. Patrick Mckenna, one of my dearest friends — we had a really good group who were really supportive of each other. Second City is where I met my wife. I auditioned for her for the touring company.

Have you ever done standup?

God no. I don’t know how people do it. To me, it’s the most terrifying art form. At least when I’m dying on stage, I’m going down with friends.

What would you be doing, if not improv?

I’d be so screwed. I’d have nothing. I have no skills to fall back on. I do the cooking at home, but I don’t like enough people to cook for them at a restaurant. I guess I’d be a con man.

Your show is in January. Winter doldrums abound. What do you do to cheer yourself up?

I watch the movies that I love, like North by Northwest, Singin’ in the Rain. Obviously, I watch a lot of old comedy because I’m quite old: Monty Python, Bob Hope movies. We have all the old Dick Van Dyke series. So I have a lot of stuff around to get me out of a sad place.

Just being at home with my wife.

Oh, I have so many. My greatest fear would be public speaking as myself. To actually give an hour-long speech as myself would be horrific.

What is your greatest regret?

Not being able to sing.

Having a career in something that didn’t exist when I was a child.

If you die, what would you want to come back as?

I like the fact that you said “if” I was to die. But, in case that does happen, I’d like to come back as a dolphin.

What is your prized possession?

Oh, I have a whiskey decanter that belonged to Frank Sinatra.